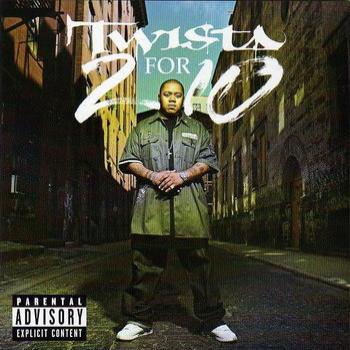 From a consumer’s standpoint “2 for 10” seems like a hell of a good deal. For only five to six bucks (depending on price point and local sales tax) you get five brand new Twista songs not included on last month’s “The Day After.” Even if you bought them individually from iTunes you’d pay just as much and you wouldn’t get the gem case or professionally pressed CD. That’s good value. The only downside is that you won’t find it at any retailer other than Best Buy, so if there’s not one near you prepare to order online and pay shipping charges. At that point iTunes might not be such a bad deal after all, if in fact they made it available. I’m not sure how far Best Buy takes the meaning of “exclusive” – does that imply retail point of sale only or all forms of distribution electronic and otherwise? Ultimately demand will dictate just how many choices there are for getting this EP.

Wait a second though – who exactly demanded the release of “2 for 10” in the first place? “The Day After” was a complete package in and of itself. The album was fifteen solid tracks from start to finish. It’s not the stunning return to form that “Kamikaze” was in 2004, but it’s not the dissapointing performance of his late 90’s co-sponsored “SpeedknotMobstaz” release or the “Legit Ballin'” compilations either. Twista held down the ground he had already established on the pop charts with crossover songs like “Girl Tonite” without giving up his Chi-Town street credibility. Well done Twista. Release some singles, make some music videos, hell go on tour with it and get that dough. Who was clamoring for five more songs after that? Fans and critics alike were already well satisfied with his latest release. It seems like the wrong time for a brand new EP of material, let alone an exclusive only one available at select retail outlets.

Don’t expect to find any official explanation of what’s going on here. None of the websites you would expect to explain this release let alone promote it have dedicated any space to explaining this EP. As of the writing of this review the official The Day After.” Screw it. There’s simply no information to be had out there about “2 for 10″ – not even The Day After” and which quite frankly didn’t deserve to. I was happy when they were limited to only appearing on “Out Here” with Juvenile, considering both Juvenile and Twista could compensate for their shortcomings. The fact they’re on 40% of this EP release is sorely dissapointing. It also begs the question of whether or not the Speedknot Mobstaz could even survive without Twista, since they’ve been riding his coattails since 1998. Even the Ludacris groupies got their own album and a few solo releases outside of being on his shit – can any of these Mobstaz say the same? Hell no. Things do improve when Twista goes solo on “Thug Sex,” but it’s not one of his better songs:

“Let me see your ass up in the air
Fuck holdin your waist baby, let me pull your hair
You ain’t gotta worry ’bout a nigga comin too fast
I can fuck you for two hours with my thumb in your ass
Ooooooooooooooooh – off a shot of Patron
I can hit you with some hard dick all night long
How I cut I’m not a wanksta
Bitches love me cause I fuck like a gangsta”

Admittedly Twista can abuse his fast-flow tongue-flipping dexterity at times, but this track is screaming for Twista to let it rip to compensate for such mundane lyrics and he never does. Toxic’s beat really doesn’t do anything for the listener either. The sing-songy melody and simple bassline are effective but it no way memorable. He does a little better with the music for “Hello” though, which sounds like a cross between the “who’s cuisine reigns supreme” music from Iron Chef and the ominous overtones often heard in “Scarface” (the Al Pacino version, naturally). Twista picks up the pace a little with his flow and his palpable paranoia at being taken out by jealous rivals is eeriely like the late Tupac Shakur. Toxic also closes the album nicely on some heavy handed guitar rocking shit for “Glory,” as Twista flips the script by delivering his lyrics in a melodic (almost sung) manner. It’s epic in delivery and reminiscent of Puff Daddy’s “Victory,” in a good way.

For those who are borderline on Twista to begin with there’s nothing to recommend this new EP highly. Ultimately these songs feel like throwaways that there wasn’t time (or reason) to clear for “The Day After.” The latter two tracks are definitely the money shots on “2 for 10” though. Twista fans will likely justify purchasing this new EP regardless, this writer included, but “2 out of 5” would have been a much more appropriate title.