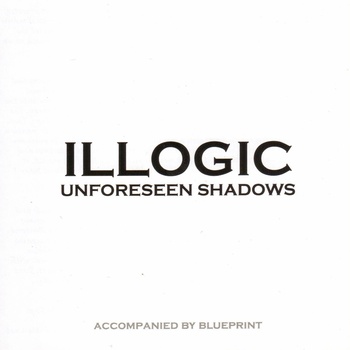 Once in a while, an album comes along that’s an unexpected breath of fresh air. It doesn’t matter the genre – if you love R&B it might be Jill Scott, if you love rock music it might be Creed – but if you REALLY love hip-hop it just might be Illogic’s slept on underground album “Unforeseen Shadows.”

It wouldn’t be fair of me to say people are sleeping on this album if I didn’t admit that I too was guilty of this crime. After hearing rave reviews about his artistry and the dopeness of his label Weightless Recordings on an internet discussion group, I had to check out their steez and see if it was for real. Fortunately the label was nice enough to bless me with a promo copy which to me was already a good sign – despite the nice press they’re getting they don’t act gassed up or front.

Illogic addresses that very topic on the song “Favorite Things,” a duet with his album’s producer Blueprint. As they break down the things they like to see in hip-hop to this plucky interpretation of that old “whiskers on kittens” song, you’ll find yourself smiling and nodding in agreement:

Blueprint: “My favorite things include hip-hop crowds that ain’t biased
Seein heads participate in real rhyme cyphers
Open mics with nobody spittin a written
Original MC’s that love being different”

Illogic: “My favorite things include, open minds to open mics
and when I get open from rhymes that strike
Creativity’s a plus, plus an MC that can crush without a cuss
and it’s nice when a DOPE chick bust”

Blueprint: “My favorite is b-girls that pop and lock
They’re able to rock the spot, passers by that stop and jock
Cats that come to a hip-hop spot
without feelin the need to cop a glock and lick shots”

I could go on and list the rest of the verses, but every single thing they say hits me in the heart like “Damn, that’s right!” These too are my favorite things: MC’s who keep it real without glorifying ignorance, people who stay humble and still make tight music, the lack of loudmouths DJ’s giving needless shoutouts on mixtapes. What are my favorite things though? Listening to albums like, checking out MC’s who don’t miss, hearing them strike the perfect timing and using producers with gems for tracks as hard as diamonds.

It’s hard to put into words what’s so nice about losing yourself in the “Unforseen Shadows” of Illogic.. it’s the same kind of vibes I get from listening to L’Roneous Da’Versifier, Pharoahe Monch, or Esau – a truly gifted MC being paired with just the right music so that you can forget yourself and enjoy their verbal lyrical gifts. Illogic has a deft sense of humor that keeps things in check or as he says on “Check it Out” over Blueprint’s lush instrumental, “At times, my metaphors are hard for me to catch and I threw ’em, heads I flew ’em ran through ’em with the quickness, synpatic shutdown what noun can hark the pronoun for the pressing – so esthetically profound I got nuns undressing.” Damn!

There are some nice little snippet guest verses between tracks that you won’t be mad at – each using the same Blueprint beat. Female rapper Lioness has one on track four, and she duets with Illogic on “Blaow!!” on the very next cut. BlackSmif has one on track nine, and you underground heads may be pleasantly surprised that Dose One has one too on track twelve – it’s nice as fuck. Blueprint even gets into the act and “talks freely” over his beat on track fourteen – and as he says himself “This is no haphazard attempt at making an album, or a collection of songs – this is genuine music.”

Truer words were never spoken, and hopefully they won’t mind if I jock this album for a little bit longer – I’m not worried about it blowing Illogic’s sense of perspective out of balance. Illogic keeps hitting me with dope snaps and gems like “If you call yourself a lyrical surgeon it takes patience/patients, it takes takin a trip with God on that ship of relation, it takes self-denial and realization” on the song “What it Takes” but what hits me the most is how seriously he and Blueprint take the craft – their total unwillingness just to put out a half-assed album just because they have their own label. Even though their home is Weightless, the art they put together is heavy in skills. If your favorite college radio DJ isn’t spinning songs like “Illogistics” and the epic near six minute long “Tale of a Griot” then tell him to hit up the Weightless Recordings website and cop a copy. Matter of fact, go get one for yourself.