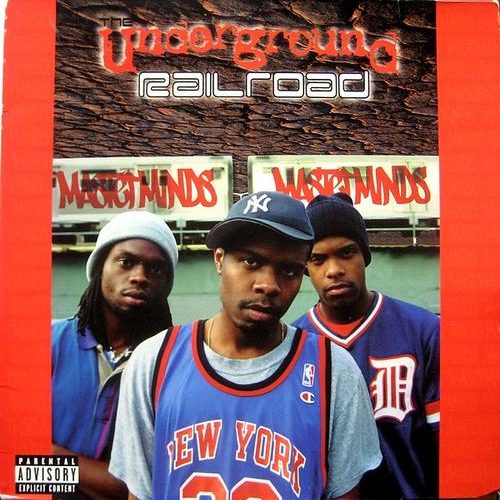 Coming with the original style and sound, The Masterminds are trying to live up to their name in their craft – simply put, they aren’t fucking around. It seems as though somebody looked at Oracle, Kimani, and Epod and said, “Justify your existance” like a time travelling galactic soul guardian – their response was to cut this album.

Production throughout this joint is mostly handled by Kimani Rogers and Epod; with Oracle and Kimani handling the rhyme duties. There’s no need for DJ Premier or the Alchemist to come in and do a beat transplant, because the heart that beats here is as strong and healthy as a newborn. If the chill Epod track on “Day One” doesn’t stir you, the even more chilling lyrics about dealing with racism will definitely strike a chord. Peep out Kimani’s lyrics from the third verse:

“I run home, to tell mom, just chill and stay calm
Four hours later they burned a cross on the lawn
Til dawn we stayed frightened, my first instict was fightin
but ten hooded crackers against one, and I’m done
So I run to keep my family, from any more calamity
Right before the riverbank is when I got yanked
Bout to get hanged, when the sheriff made his interjection
(God damn) And now I’m sittin in jail for my protection”

Visually, the shit can put you anywhere in the history of Southern racism, although they namecheck Alabama several times throughout. Lest you get it twisted though, The Masterminds are not here to preach or even to teach, but just to float on the melodies with whatever creative lyrics they have to spit. That can be mournful reflection such as on “Memories” or it can be some straight lyrically tough battling as on the spartan sounding “Shellshocked.” What may surprise a few heads in the know though is that ex-Bush Babee member Mr. Khaliyl shows up twice on the album, first on the punchy Kimani track “Bring it Back” and then immediately again on his OWN beat for the anthemic “Joints 2000.” Oracle’s lead verse really sets this one off nicely:

“You’re a synchronized dub of that jiggy shit in clubs
You even got a substitute you pay to hit the pubs
Both of y’all sport fake tag watches,
that you bought on Jamaica Ave.
Drivin up and down in your broken Jag
Your “Hustle” I gotta “Knock It,” cause you ain’t makin a profit
Your dreams of bein famous shoulda stayed in the closet”

I don’t honestly think this verse was directed at Jay-Z, but it certainly sounds aimed at rappers who spend too much time obsessing over flossing instead of building on their skills. The Masterminds certainly don’t have this problem, and they’ve obviously carved out some respect in the underground when you see that El-P, J-Live, Mr. Complex and J-Treds ALL came together to collabo’ on one track called “Seven.” If it seems like there are only “Six” rappers on that list, I am reluctantly forced to mention that Shabaam Sahdeeq is also on the cut – fortunately he goes last.

There really are very few tracks that don’t work here. For every three of four tracks like the energetic “Spinners” and the visionary hip-hop apocalypse of “2025” (admittedly J-Ro rocked it first on “2014” but this is still a dope cut) there are only a few missteps like the lyrically sound yet somewhat musically underwhelming “The Professionals.” This album represents what independent albums or so-called “backpacker” rap should be – energetic and refreshing without catering to the cliches of the mainstream OR the underground. The Masterminds walk that fine line like a tightrope and execute a perfect triple flip off the line straight into your CD player’s net – so unlike Austin Powers you won’t be needing that eject button when you ride to this.