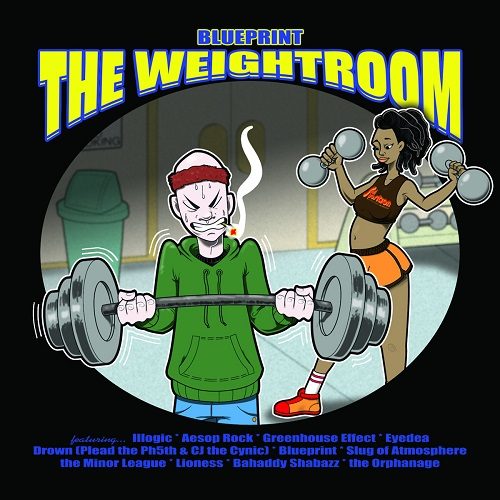 In a time frame of three years, Blueprint has certainly made an imposing impression on the vast regions of the hip hop underground. The Columbus native and founder of Weightless Records has produced albums for his group Greenhouse Effect as well as both of Illogic’s albums, his soulful flavor being the perfect accompaniment to his labelmate’s smooth styles. His emceeing has gotten progressively better as well. Print has gone from getting barely edged out by Sage Francis in the final round of the 2000 Scribble Jam MC Competition, to dropping guest spots on albums by Eyedea and Abilities, Aesop Rock, and RJD2, to collaborating with RJ to drop the best EP of last year, the Soul Position EP.

With “The Weightroom,” Blueprint has created a solid musical symphony, with a couple of gems from some of the underground finest emcees, and a few slight miscues, which can be attributed to having a handful of affiliates who aren’t quite up to par with the A-List of emcees on this album. Print handles all the production on the album, plus makes vocal offerings on six of the twelve full-length songs, yet this album still feels much more like a compilation album than a solo endeavor. While I wouldn’t consider Print to be in the elite echelon of producers just yet, he is still a solid beatmaker nonetheless, and is certainly able to conjure up some top-notch bangers that cater to any style of rapper, which this album is irrefutable evidence of.

Things get started with a Greenhouse Effect track entitled “The Proper Education.” The keyboard beat is simplistic, yet laced with some spacey samples and scratches that liven it up, and all three emcees attack the track with energetic, battle-oriented flows. On that same vibe, the lone Blueprint solo “Time Management” interweaves piano chords with violins and has Print shadowboxing wack emcees with lines like “I got a mean left/you box with gay rights.” The chemistry between Blueprint and Illogic is quite apparent on Illogic’s solo track, “Lucky” as Illogic flips fantastic wordplay over a very hypnotic, clarinet-driven production.

“ICU” is another dope track, which combines Print’s sparse drum patterns with more piano chords, and features Vast Aire, Plead the 5th and Blueprint himself on the verses. Vast opens up this dark track with nothing less than a dose of the abstract poetics we’ve come to expect from this Def Jux representative. Peep game:

“It’ll kill Lois Lane once the ground separates
To see a man in blue tights
With all might, reverse time with a red cape
Naturally high, with sour wine from red grapes
Walking through reality snipping the red tape
Rock-a-bye baby, I’ll cradle your world
But if you come out your face I’ll shake your world
I told cats from friction once I step out the skin
Outside cocoon, shell might glisten
Slavery’s a muthaphuka like
Slave masters fucking my mother and I’m shackled, forced to listen”

The somber mood carries into one of the best tracks on the album, “That’s What You Get” by The Minor League. The parable warns bullies and criminals of the possible retribution and karmic repercussions that may come along with their actions, each rapper narrating their own anecdote which has the miscreant causing havoc until the tables are turned, at which point he meets his eventual undoing. Blueprint’s story comes off the best, but Flip the Urban and P. Dunbar don’t disappoint either, pounding home the message that what goes around, comes around, and Print’s cinematic production is nothing less than the exceptional.

The melancholy tone reaches a climax on the most anticipated track on this album, the first effort from the recently formed supergroup, the Orphanage. Consisting of premier underground talents like Aesop Rock, Slug, Illogic, Eyedea and of course the man of the moment Blueprint, the group has kept the specifics of any type of album tightly under wraps, frustrating fans and industry heads alike. However, if “Obsolete” is any indication, it’ll be well worth the wait for a full-length album from these five lyrical geniuses. Check out a portion of Slug’s verse:

“Yo, the circle keeps me laughing loud
About how the clitoris within your disposition is projected outward
Got a crowd of mother figures, got a lot of love to give ya
As I sift through the undernourished gift
Welcome to the show sir, no sir, no guest list
Unless your girl is down to wash my hair and make me breakfast
As reckless as it smells it’s a long way from hell
And there it is until I run out of thoughts to sell”

But alas, this album is not perfect, and it does have a minimal amount of flaws, specifically with the lesser-known emcees. Endorsing your homeboys is always a noble act, and Blueprint certainly serves up some tailor-made instrumentals that suit each respective artist’s style. But whether they are just overshadowed by the bigger names, or they just can’t pull their own weight, the lesser known artists do slightly taint the listening experience. CJ the Cynic and Plead the 5th are both dope lyricists in their own right (“We sing slave songs, keep the heart shivering / Outlined in the dust of the cold worlds we’re living in” says Plead the 5th on “Slave Songs”), but lack the charisma to make their rhetoric zestful. Bahdaddy Shabazz has an animalistic intensity to his flow, but his voice and delivery are hit or miss, while Bru Lei is a just a drab emcee, who doesn’t display any identifiable merits on his track. None of the songs by the aforementioned emcees are wack, but they do disrupt the flow of an otherwise consistently dope album.

With a Soul Position LP scheduled to drop sometime in the Spring and a Illogic LP for the Fall, not to mention being named to URB’s 2002 Next 100 List, Blueprint’s star is shining brighter than ever, with no signs of burning out. With this album he proves that he is equally effective behind the boards as he is on the mic, making his versatility an issue that can no longer be debated. He has slowly yet surely emerged as an elite figurehead in the expansive underground hip hop scene, and with his unlimited potential, as well as a label with a profuse quantity of talent, he and Weightless Recordings are carrying a lot of expectations on their collective shoulders. While this album is dope, its nothing groundbreaking, and the uneven sections act as blemishes on what could’ve been an immaculate musical complexion. Still, if you are a fan of labels like Weightless, Rhymesayers, and Def Jux, or just a lover of good hip hop, then you should check this album out, post-haste.