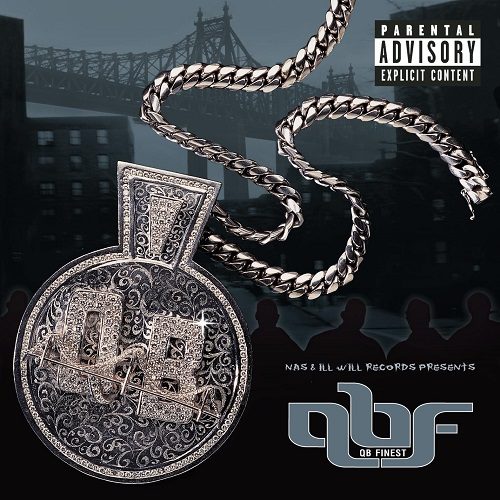 Everybody’s got a crew, and everybody wants their crew to shine in the fickle and fleeting world of hip-hop music. Nas has an advantage over the people who just put on their homies and cousins though – his fam is the ENTIRE Queensbridge Projects. That means proven hitmakers from MC Shan to Mobb Deep to ‘Mega are all down with the set. They show and prove it here too on this QB unification album known as “QB Finest.”

Even though the lead single on the album is “Da Bridge 2001,” a remake of MC Shan’s hip-hop classic “The Bridge” that even includes raps by Cormega and Nature (yes, ON THE SAME SONG, they squashed the beef) Shan is behind the scenes as the elder QB statesman that’s lurking behind all the 21st century’s new jacks. When Nas came along on Main Source’s first album in 1991, he stood poised to take over Shan’s king of QB throne, and a decade later he still holds the title. Appearing on 7 of 17 tracks and releasing this LP on his own Ill Will Records, Nas clearly is the glue that holds this shit together.

For better or worse, the tracks that feature the already well known rap veterans of Queensbridge rock the hardest. “Our Way” from Capone-N-Noreaga is another banger from Scott Storch, who has been branching out from his Roots affiliations to put hot tracks on albums East to West. “Find Ya Wealth” by Nas is the kind of track we expect lyrically from Escobar and musically from L.E.S., who of late only seems to be getting sharper. In fact, this track should have been on “Nastradamus”:

“Duckin truancy cops, trains I hopped, to make it downtown
Cisco in my veins, pissed between trains
Canal Street, just lookin at rings
Outside through a glass, went in the store and asked
how much it cost, Korean man brushin me off
for some other big time customer, probably a hustler
who looked down at my small chain and chuckled up
I said, ‘I’ll be just like you soon, motherfucker what?'”

Nas also shines on “Teenage Thug,” a track which updates the Slick Rick “Teenage Love” classic with the help of Millenium Thug. Prodigy of Mobb Deep raps over the ominous Havoc produced “Power Rap” as well as the “Self Conscience” – a battle of P’s id and superego for control over the life of a thug. As brilliant as these tracks are is how bad some of the album’s lesser stars are in reverse. It’s hard to imagine any baller pushing his whip to Braveheart’s “Oochie Wally” – a simple sex braggadocio track that lacks a hard beat or good style. As much as I’d like to get excited about the return of Roxanne Shante on wax after her brief appearance on Frankie Cutlass, she does nothing for “We Live This” – Havoc’s track is not up to his usual snuff either. Craig G has a reputation as one of hip-hop’s most underrated MC’s but none will recognize it when he is held back by rhyming with Lord Black, Littles, and Chaos on “We Break Bread.”

About the only unknown rapper who comes off nice on this compilation is Mr. Challish, who undoubtedly benefits from a hot Alchemist produced track on “Money.” Overall, this album benefits from the Nas’ influence, both musically and lyrically – and as such it comes out more ahead than behind. From the N.W.A remake “Straight Outta Queensbridge” to the “Kids in Da PJ’s” ode to the shorties, there’s a lot of good material to be happy about. The two biggest gripes I have about this album is that there aren’t more appearances on the album by Tragedy Khadafi and MC Shan – hometown rappers whose talents definitely could have elevated a somewhat better than average compilation to truly legendary status.