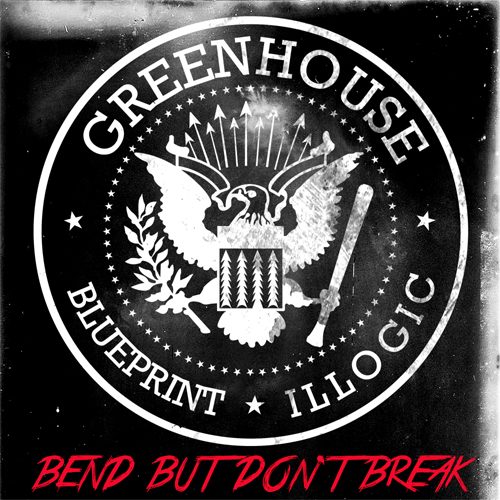 Greenhouse is such a dumb name for a rap duo. Delicate, transparent and warm, it is precisely the type of garden structure you wouldn’t associate hip hop with. Hip hop would be a large, well-worn shed that laughs at the flimsiness of such weak man-made structures. Sheds house sharp implements, are generally cold and fare well in bad weather – greenhouse? Pfft, get the fuck out of here. Except this Greenhouse consists of two very strong artists; Illogic and Blueprint, who have both set up their area in the garden of hip hop to cultivate dope music as opposed to cucumbers. There’s no hoes here, just two revered lyricists going in on some hybrid 80s/2010s production.

Blueprint’s production constantly hits all the right areas. There’s a heavy electronic influence that has become more and more popular since El-P broke through to a wider audience with his Killer Mike and Run the Jewels projects, but “Bend But Don’t Break” often feels like a more accessible alternative for those who weren’t as keen on the Run the Jewels album. Friendlier riffs and drum loops give the record a “Boogie Down Productions in high-def” feeling. The starkness of “That’s What’s Up” and the tour-ready anthem “This Is It” are accessible, but both packed with enough depth and intricate rhymes that they keep on giving long after you’ve first heard them. Illogic’s declaration that the game is full of ‘slinky rappers’ (lots of them, worthless but ultimately fun to push down the stairs) on “This Is It” shows how in-depth some of his lyrics can be. Blueprint’s abrasive delivery and more accessible style is the perfect companion to Illogic’s wordier ways that require a bit more concentration.

The Rakim sample on “E-F-F-E-C-T” generates goosebumps like it was 1988, just as Blueprint perhaps wishes it was. There’s no denying that you’ll need to have an appreciation for throwback hip hop, given the crashing drums and electric guitar stabs that pop up. Yet, this album doesn’t sound like an old piece of music – it’s fresher than cut grass. The likes of “Microwave America” plod with a certain swagger, utilising a lo-fi, retro charm that inevitably marks Greenhouse out as intelligent hip hop for backpackers. Fuck that stereotype.

This is hip hop for smart hip hop fans which benefits from production that just isn’t available on Illogic or Blueprint’s solo efforts. This is a strong record, but not without its flaws. Supastition is reliable as ever on “The Web”, a paranoid track on society that is let down by a dreary backdrop that lacks the snappiness of much of the other songs. Nina D’s hook on “Fast Lane” is also disappointing, especially as the instrumental is one of the best here. I’d also argue that it’s not going to tickle everybody’s taste buds – but give Greenhouse a chance and you’ll be sampling some of the freshest product of last year (2013).