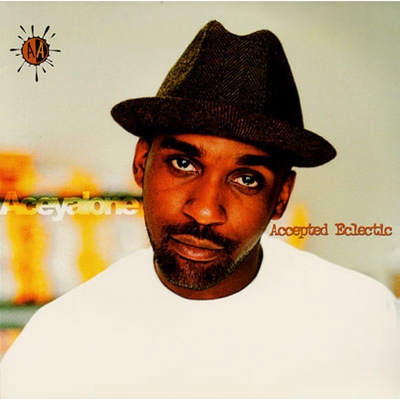 “See I want everything that I don’t have
So don’t laugh when I tell you I want half
But I don’t want yo’ half, just my half
And on my behalf, put it on a phonograph
CD’s, tapes, packaged with a photograph
And respect the ancestors when we walk the path”

True dat. As Acey says on his slamming Ed O.G. remake “I Got to Have it Too,” it’s time to for Aceyalone to get his half. Aceyalone has paid dues like a MOTHERFUCKER in the underground. Check the score card – two albums with Freestyle Fellowship, two brilliant solo albums (“All Balls Don’t Bounce” and “A Book of Human Language”), collaboration groups like the A-Team +and+ the acclaimed “Project Blowed” compilation. How much more could one man do?

A little bit more than that, it seems. Like all great artists, Aceyalone is driven to create and share his own vision with the world; even when the world is not ready to acknowledge his or her abilities and offer praises. There are so many reasons that a visionary like Aceyalone is not as recognized as DMX or Ice Cube. Some people have a selfish need to keep great art to themselves when they discover it – as if widespread acceptance or commercial success would taint what makes it beautiful. Sometimes it’s morbid; Tupac Shakur was not recognized as a visionary urban griot until after his death – it gave people the distance to look back on his catalogue with adoration and appreciation. And sometimes it’s just the petty single-minded vision of program directors and Viacom executives when they air on the waves only the formulas that are Accepted and not Eclectic. Now you see why the title of Acey’s new album makes perfect sense; and he breaks it down with science on the track “B-Boy Real McCoy”:

“All you radio stations play a whole lot of crap
It’s like I’m hungry at the table and you feedin me scraps
So this one’s, for the people who can ride the wave
and go into the battle and come out unscathed
See my, only regret is that I probably never gave
enough back, to hip-hop, for the life it saved”

Acey couldn’t put it down any tighter than that – he creates to live, and he lives to create; so why don’t people appreciate? Maybe you will too if you hear this album. Even though Aceyalone is as “Eclectic” as his album title, he’s still easily accesible. With humerous songs like “Master Your High” (with a GREAT Slick Rick sample) and “Rappers Rappers Rappers” Acey transcends the music and connects personally with the listener. The voice is a melodic instrument for Acey and he plays it like Itzhak Perlman plays a violin – dropping to Barry White depths for emphasis and soaring to Kelly Price highs for effect. There’s nothing dull about listening to Aceyalone rap – he puts his every emotion into each word so that you FEEL what he’s saying, literally.

The topic matter is broader than Barrington Levy, believe me. Acey confronts the fundamental truth that “If it’s one thing that everyone needs it’s they god damn space,” on the song “Five Feet.” Over the somber beat of “Hardship” he reveals the struggle of life when “some people relate, but they don’t understand the words.” Yet if you think Aceyalone believes it’s all bad and life just sucks, wait until you hear the staticky and gritty “I Can’t Complain” where he holds his head up like a true soldier and says “Being all you that you can be despite your circumstances; just buckle up and take the world head on and make advances.”

Aceyalone has been accused of being inaccesible by the masses due to beats which emphasize his flow but don’t enhance the head-nod. There’s no truth to that argument on this release; because songs like “Serve & Protect” and “Bounce” have plenty of thump and bump. Even that Dilated anti-Eminem battler Evidence laces Acey for three cuts, including a reunion with Freestyle Fellowship rapper P.E.A.C.E. on “Microphones.” Honestly, and speaking personally here, if you appreciate cutting edge rap music which resonates with personal soul and not just more tired cliches about being hard or making money, there’s absolutely no reason you shouldn’t own this album. Don’t let Aceyalone be one of those secrets people keep hidden to themselves, or be the kind of artist who is only appreciated after his death. Recognize those skills NOW and purchase this LP; whether top 40 radio and “106th and Park” ever will or not.