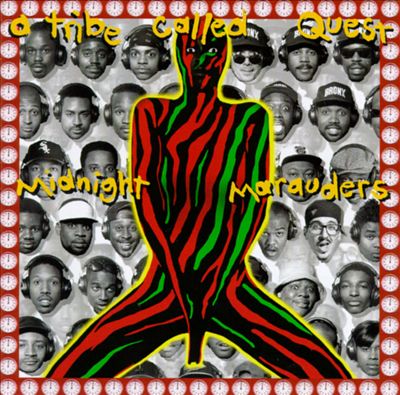 Slowly, as time passes, the name of A Tribe Called Quest is starting to fade from hip-hop’s collective conciousness. There was a time in the early 1990’s though when each album from the collective of Q-Tip, Phife Dawg, and Ali Shaheed Muhammad (plus mysterious member Jarobi) was anticipated like the 1st and the 15th of the month. Their first three albums are all considered hip-hop classics, but of them one head after another has proclaimed that “Low End Theory” is the best. There’s no reason to question it as one of the fifty greatest rap albums ever, but this review will propose that “Midnight Marauders” is an even better album despite not being nearly as acclaimed.

Try cruising around with “Midnight Marauders” in the trunk for the four days, and you’ll become firmly convinced it IS the best album that Tribe ever made. There’s something sublime about the beats of Ali Shaheed Muhammad. Each song seamlessly blends together tight basslines and jazzy instruments; fusing them so tightly together with the lyrics of Tip and Phife you can’t even imagine them seperately. To hear the beats is to evoke the words, and vice versa. Recording engineer Bob Power deserves some of the credit too – so beloved by the Questers he even got a shout out on “The Chase Pt. II” when Tip calls for him to “adjust the bass and treble, make my shit sound clear.” Obviously, he did!

This album doesn’t exist strictly on it’s musical merits though. It’s the little elements, often overlooked, that are brush strokes on this masterpiece. Listen to the brilliant way that Ali Shaheed Muhammad disects Rakim’s “My Melody” at the end of “We Can Get Down.” Examine the heartfelt and vividly portrayed description of hip-hop nightlife Q-Tip exposes in “Midnight.” Peep the bohemian ode to sex called “Electric Relaxtion” where The Abstract confesses: “shorty let me tell you bout my only vice/it has to do with lots of lovin and it ain’t nuthin nice” – who among us hasn’t feel that way? In fact, this album is lyrical brilliance by BOTH Tip and Phife on an unparalleled level. Never before and NEVER again will you hear anybody rap a line like “Lyrically I’m Mario Andretti on the momo” as Tip does on “Award Tour.” Most heads don’t even know what that means – a momo is a type of steering wheel used by race car drivers. Rappers today would never dare go over people’s heads; instead you’d hear “Lyrically I’m Fort Knox with the golden touch” or something MUCH more generic.

What makes this album even more amazing is that the one track NOT produced by Ali Shaheed Muhammad fits in beautifully. Extra P (a.k.a. The Large Professor) perfectly captured the Tribe vibe in “Keep It Rollin” and gave a cameo performance that for me solidified his place in hip-hop history. His simple prose elegantly captured the moment:

“I proceed with what ya need like Akinyele
a whip looks complete when the tires say Firelli
funk monkey, one rapper fell off, now he’s a junkie
There’s eight million stories in the city it’s a pity”

Back when this album came out in 1993, the Original Hip-Hop Lyrics Archive was just an FTP site on a server that donated me some space. It was so small I could back up the entire thing on a single 3.5″ 1.44MB disk. What was the label I wrote on the outside of that disk? “Lyrics to Go.” I still have that backup disc from back in the day so I’ve always had “Lyrics to Go” – and on this album so did Tribe. This is one of those rare albums that doesn’t have even ONE bad song. Even Public Enemy slipped with “She Watch Channel Zero” on “It Takes a Nation of Millions.” There are NO miscues on “Midnight Marauder.” Even the “computer woman” sounds perfect on this set. She adds just the right amount of serene weirdness to The Abstract and Phife’s lovely wordplay, and even says some profound things: “You’re not any less of a man if you don’t pull the trigger, you’re not any more of a man if you do.”

Listening to this album again and again has at last for me made it sink in how monumental their break up is. Sure, their work of their later career wasn’t of this caliber, but anybody capable of making music THIS good deserves at LEAST three bad albums to “find their way” back to dopeness. “Midnight Marauders” proves it – an overlooked work of genius in the same way that “Buhloone Mindstate” is disregarded by fans of “De La Soul is Dead.” If you love hip-hop music and don’t own this album, go cop that. Yesterday, if not sooner!