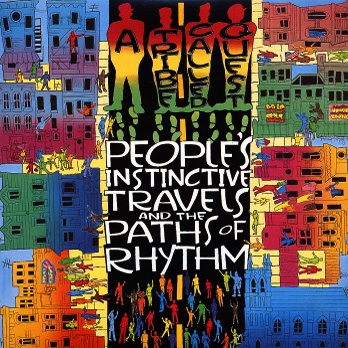 People's Instinctive Travels and the Paths of Rhythm

A Tribe Called Quest :: People’s Instinctive Travels and the Paths of Rhythm

Picture a rap group so carefree, so secure in their spots, that they could give their songs ridiculous titles like “Bonita Applebum” or “Ham N’ Eggs.” Think of an act that is willing to display all their youthful naivetÃ©, and instead of making that a negative they turn it into a strength. Could this type of act be possible in our modern world of rap? Sure, Little Brother doesn’t take themselves too seriously, but Phonte’s blogs on mainstream rap and its audiences put a damper on the positive outlook they do their best to uphold. The Pack, a Cali-bred quartet influenced by the hyphy scene, displays a cocksure demeanor that only a group of confident teenagers could exude. The problem is they’ve only made their mark through a novelty single, “Vans,” and their confidence doesn’t necessarily stem from their abilities, but rather the movement they represent.

Only one act has been able to fit this description, quite an accomplishment considering that rap has been around now for more than a quarter century. A Tribe Called Quest fit this mold perfectly on their debut, “People’s Instinctive Travels and the Paths of Rhythm.” Before being scorned by Industry Rule No. 4080, the Tribe was the hip-hop embodiment of Hakuna Matata, shout out to Disney. The group was energetic, youthful, and at times downright silly. Before the Abstract and Co. got all artsy on us on “The Low End Theory,” they kept it as traditionally hip-hop as possible on their first release, using a variety of samples that spanned an eclectic palette of genres. Unlike their fellow Native Tongues in De La Soul, Tribe’s conscious brand of rap was presented in a more concise package, and usually stressed that people could dance to their messages, too. There would be no skits on this album, in contrast to the numerous amounts De La included on “3 Feet High And Rising.”

Besides recording a more functional, sample-based brand of hip-hop, this version of Tribe also in many ways saw the creative peak of Q-Tip. He would never shine on another Tribe album like he did here. Tip’s storytelling abilities took center stage, as he played advisor to a culturally-deficient Frenchman on “Luck Of Lucien,” then traced his calamities on “I Lost My Wallet In El Segundo.” The beauty of these songs lies in the fact that despite having no moral value, they’re still timelessly entertaining. No lessons will be learned from listening to Lucien’s follies in America, but it’s hard not to laugh when you hear dude trying to convince the ladies that his accent is “sexy.” At this stage in their career, Tribe was able to tap into their innocence while simultaneously tapping into ours, allowing the audience to laugh and bop their heads.

The young producer responsible for all this head-bopping was none other than Ali Shaheed Muhammad. Much like Tip, Ali saw his talents fully utilized on this album, only to have his role diminish as the Tribe began to experiment in later works. The mark of a true DJ is one who has an ear for putting samples together, and Ali exceeded this standard on his group’s debut. He reshaped some of the most famous sounds in music into textbook boom-bap anthems. An Earth, Wind, And Fire sample becomes the sonic base for “Mr. Muhammad,” and guitar riffs sampled from Jimi Hendrix himself provide the uptempo bounce for “Go Ahead In The Rain.”

This album wasn’t all about fun and games, as it featured a heavy dose of the conscious rap the Tribe took pride in. “Description of a Fool” addressed hard-line topics such as domestic abuse and selling drugs, and was unique in that the Abstract became a sage despite being only around twenty years old. On the album’s infectious opener, “Push It Along,” Tip and Phife spit rhymes meant to uplift. The Phifer rapped, “It’s time to decipher/ the ills of the world, make the situation brighter.” The jazzy horns on this beat subtly foreshadowed the direction the group’s music would take in the future, with the group deciding to eschew samples for a more organic, instrument-based sound.

Besides the noticeable lack of live instrumentation, this album also lacked its fair share of Phife Dawg, which can be attributed as a positive or a negative. On one hand, Q-Tip solidified his place as a hip-hop great with his virtuoso performance, a performance that might’ve not been possible without Phife’s secondary role. However, when Phife does pop up he’s full of thought-provoking lyrics that reflect himself and his surroundings. On the timeless cut “Can I Kick It?,” Phife innocently quips “Mr. Dinkins would you please be my mayor?/ You’ll be doin’ us a really big favor,” referencing the first, and so far the only, African-American to become mayor of New York City.

“People’s Instinctive Travels and the Paths of Rhythm” is a classic album. More than fifteen years after being released, it continues to be a beacon of light in hip-hop’s history, a record that represents how refreshing rap can be. This isn’t just required listening for backpackers or old-school cats; several songs on this LP still speak today. Cats are still trying to holler at a fly chica named Bonita, and everyone continues to foot up and down like UNLV Rebels, leaving Footprints in their wake.