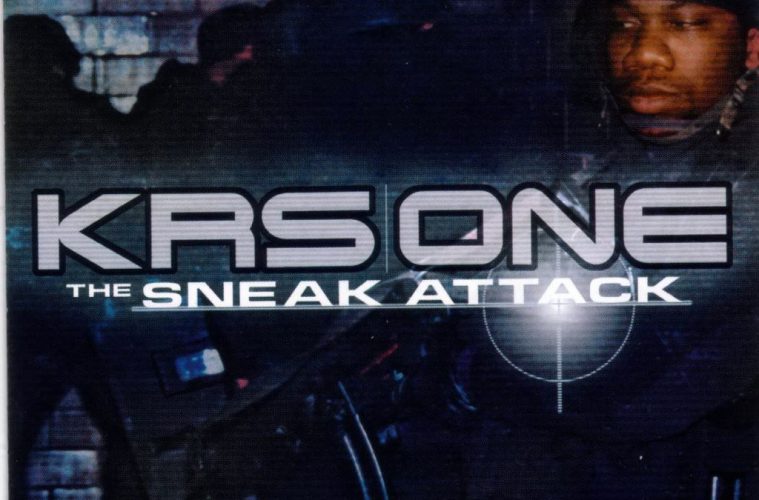 The East coast hip-hop veterans have been busting back on to the scene in record numbers within the last six months. Yes, people who you might have once scratched your head and asked, “Whatever happened to..?” all have new music again. Ed O.G., MC Shan, Run-D.M.C., Kool G. Rap, and KRS-One. Yes, hip-hop’s self-proclaimed “teacher” and “blastmaster” is back at long last in 2001 with his long-awaited and much anticipated brand new album “The Sneak Attack.”

There are few artists who have KRS-One’s long track record in hip-hop. So long in fact that it would take too long to explain in this review. Suffice it to say that very few rap artists can claim to have had hits in each of the last three decades other than him. KRS-One doesn’t just make records though – he goes on lecture tours and speaks out advocating positivity, self-awareness, and hip-hop unity. Clearly, he is one of the elder statesmen of hip-hop, and also one of the most respected.

When KRS-One first came on the rap scene, he was a breath of fresh air in a world made stagnant by too much materialism and negativity. With songs like the Domingo produced “Krush Them” he still is – critiquing a money-grubbing music industry where MC actually stands for “Most Confused.” These kind of songs are not only expected from “the t’cha” they are most welcome in a hip-hop world that has again become obsessed with ostentatious displays of wealth and very little regard for true art or lyrical skills. His surprising attack on DJ’s with “HipHop Knowledge” also clearly points out they are just as responsible for rampant materialism and makes a good case that in many cases where he was called “contradictory” his name was exploited by writers just looking to get paid.

In the past though, KRS-One has had excellent musical production to back up his exemplary flow and highly crafted lyrics. With the help of his brother Kenny Parker and hip-hop music superstars like DJ Premier, he’s crafted hit after hit. The lead single “Hot” definitely lives up to it’s name with production by Grand Daddy I.U. and Jazzy Jeff, but a lot of this album fails to shine. Self-produced songs like “The Mind” and guest-produced songs like “What Kinda World” by Domingo both fail to generate the lead single’s heat. The man who invented the term “Breath Control” in rap has no problem flowing to these beats – but who wants to hear them? They don’t have the foot-tapping, head-nodding, mind-blowing feel of past KRS-One hits like “Step in a World” or “My Philosophy” or “MC’s Act Like They Don’t Know.” Those songs, heard once, stick in your head for a lifetime; unfortunately, these don’t.

What seems to be the most peverse is that the songs with exemplary beats are too short or feature elements that drag them into mediocrity. The Kenny Parker produced “I Will Make It” is a perfect example. No one doubts that the Hezekiah Walker Choir are great singers, but their harmonized melody seems completely at odds with this rugged boot-stomping beat. At under two minutes and thirty seconds, nearly half of the song is taken up by KRS-One lecturing or the Choir singing. The heart of the song where KRS finally DOESrap over this excellent beat is just over a minute long, and it’s not enough. If KRS-One had rapped for the entire two minutes and thirty seconds and left out the Choir, this beat and his rap combined would be a hip-hop classic. As it is, it’s not even close.

There are plenty of worthy songs for any KRS-One fan to listen to, and this album is clearly meant for those who know him and his track record best. They will appreciate the thumping “Get Your Self Up”, Mad Lion’s beats and a much better use of the Choir on “The Raptism”, and the powerful bursts of Kenny Parker’s underrated musical production on “Ghetto Lifestyles” and “The Lessin.” This album will not achieve KRS-One’s goals of waking up the masses or re-energizing the hip-hop culture base though. For a phenomenal rapper and a legendary presence in rap to waste this opportunity is a shame.

Ever since “Return of the Boom Bap” came out in 1993, every KRS fan has been waiting for him to blast the public with another album that has non-stop dope beats and rhymes end to end. So many KRS-One albums before and up until then lived up to that promise – and very few have since. That doesn’t however mean that ’93 was the pinnacle of his career – it will continue for years – it just means that such heights will have to come later than 2001 if in fact they will come again.