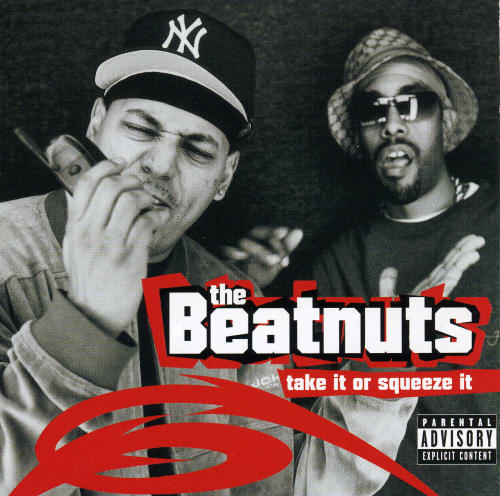 The Beatnuts :: Take It or Squeeze It

For the rap group known as The Beatnuts, the formula’s remained the same since the underground classic Intoxicated Demons EP: drink, smoke, have a lot of sex and rap about it over dope ass beats. The reason that the Beatnuts have never truly blown up remains mysterious; dope ass production and uncomplicated yet often humorous lyrics usually equal record sales in the rap genre. Of course, they are on Loud Records, who’s marketing blunders are well documented, most significantly with Tash’s “Rap Life” and Xzibit’s “40 Dayz and 40 Nightz”, two albums that had platinum potential yet failed to even go gold. Last time around for The Beatnuts on “Musical Massacre” they received a small share of the recognition they deserve with the bananas single “Watch Out Now”. Still, the album as a whole was labeled as disappointing and wrought with filler by the group’s loyal fans. Where would the Nuts go from there?

To the studio to record a fat album. There is not a weak track on the entire album. Now, that does not mean it is flawless, classic, or anything like that; but there is not one song on the album that makes you want to hit the forward button after about 30 seconds, more than can be said for 99% of today’s hip hop albums. “Prendelo [Light It Up]” featuring Tony Toca is a typical tight beat from the Nuts. “Contact” is one of the illest tracks of the year; the beat is butta, the lyrics are nice, the chorus is catchy, and the song as a whole is perfect for lighting one up. “Yo Yo Yo” features the welcome return of Greg Nice, with production that mesmerizes the listener. It only leaves me with one question: where’s Smooth B at? You’ve probably also heard Greg Nice on the lead single “No Escapin’ This” whether you realize it or not. Once again, it sticks with the Nuts party and bullshit formula and does not disappoint. Peep the lyrics:

“Pass the mic to big Psych, the manufacturer
The architect, bringing you the art of wreck
You used to hate my click, now you want a part of it
We coming with more hits that funk like Parliament
Comparing me to another’s going to lead to an argument
The heat we fry you with, straight from the armory
Guerilla army, we kill tracks and harmonies”

The only truly disappointing thing about the album is the short length of “Mayonnaise”, which features some of the best production here and some funny ass lyrics, but gets cut short at 1:58. Bottom line, this album isn’t going to breakdown any political barriers or uplift the community, it’s gonna give you something ill to listen to when you’re cruising or partying. You want something to drink, smoke, bounce, dance, drive to that doesn’t sound like the Neptunes or Timbaland, look no further than “Take it or Squeeze It.”

The Beatnuts :: Take It or Squeeze It
8Overall Score
Music9
Lyrics7