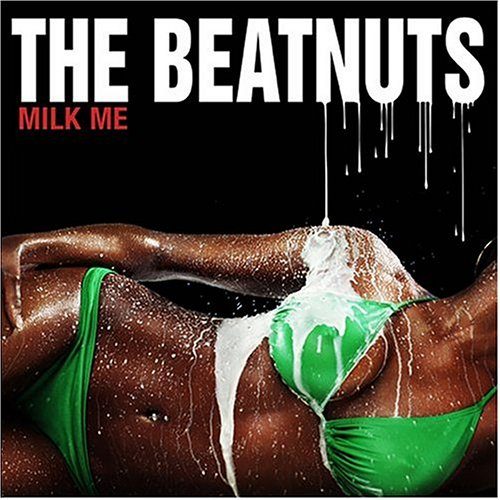 The Beatnuts :: Milk Me

Few rap groups have such an apt title as the Beatnuts. Self-professed crate diggers, they have been putting it down ever since their debut EP “Intoxicated Demons” in 1993. Though they never have pretended to be microphone fiends, they haven’t needed to. Their beats were just that hot. In addition, with each release they have tuned their sound so that none of the discs in their catalogue sound too similar. “The Beatnuts,” their 1994 venture (with former member Fashion), is filled with heavy drums and quirky samples. 1997’s “Stone Crazy” ushered in a more focused production style centered around smooth, syrupy funk and vocal samples. “Musical Massacre” and “Take It Or Squeeze It” showed even more evolution, and the result of their work on the aptly titled “Originators” was a barrage of tight snares and seriously catchy loops designed to make you nod your head.

The other side to The Beatnuts is their rhymes, which really haven’t changed a bit. While there has always been something to study on their releases, the production is usually just that. They talk as much shit as the next man, but lets face it: No one buys a Beatnuts album because they want to hear groundbreaking lyricism. The off the wall, misogynist lyrics are just along for the ride. After all, they are the Beatnuts.

Now, in August of 2004, it is time for deez Nuts’ 6th full-length release. If you think that they are going to step away from the formula that has never let them down, you are dead wrong. After all, why would they’ With some tweaking, each new disc has bumped just as hard as the last. They have a fanbase, and they stick to it.

Just from the cover art, depicting milk getting dripped on a nearly nude woman, it is easy to determine the nature of the material inside. The track listing only fortifies this theme, with titles such as “All Night,” “Freak Off,” and my personal favorite, the “Take Your Pants Off Interlude.” After a short intro, “Hot” featuring Greg Nice kicks off the album. A thick horn section drives the beat, and Nice’s typical endearing lyrics are an added bonus. Surprisingly, there’s a lot going on in the background, especially the staggered drums, which is far from the distinctly simple drum programming on “Take it or Squeeze It.” This added element helps the replay value.

Aside from “Hot,” there are very few standout tracks. “Find Us (In the Back of the Club)” featuring Akon is notable for a marvelous minimalist beat and catchy hook. Also, “Uh Huh” with Tony Touch and Gab Goblin uses a wicked vocal sample, producing head great results. Other than these, though, no song is especially memorable. Even the buzz-worthy “Confused Rappers” with Rahzel stands out because of JuJu’s verse calling out J-Lo:

“What would possess you to use
my records like if I’m here to let you abuse
made a bad decision, your heart wasn’t in it
girl, you know you haven’t been to the block for a minute
getting all the little latin girls to buy it
when you can’t really sing and you’re no Salma Hayek”

Besides this uncharacteristic bit of nastiness from the duo, they don’t stray far from their formula. Nearly each beat is nice, with very few missteps. Surprisingly, they choose to take a more understated route, as many of the songs have subtle instrumentation that doesn’t sound spectacular. Upon further listens, however, it is clear that each production is extremely well constructed, and for a Beatnuts album there is a lot of variety on the production tip. Some tracks creep along slowly with a moodier tone, and of course there are plenty of uptempo joints.

An extensive list of guests helps them out on the mic. In some cases, artists such as Freeway and AG stoop to the Nuts’ level lyrically, but it’s hard not to when each recording is in party mode. Thankfully, For the most part, the rhymes are harmless (save a few exceedingly sexual verses). Of course Les and JuJu are not the epitome of lyricism, but they have distinct voices, and in their own way they are sort of endearing. While rhyming, they just ride the funk that they have crafted, which is all we can ask of them.

The Beatnuts have a distinctive sound, and they don’t stray from it here. They even craft a song (“It’s Nothing”) that rocks a strikingly similar flute loop to the Sesame Street one from “Off The Books.” Basically, if you never liked the Beatnuts, this won’t change your mind. If you do, though, check “Milk Me” out. It varies enough from their other efforts to feel new while adhering to the style that has served them in the past. Their formula isn’t broke, so they decide not to fix it.

“Milk Me” will not blow you away. This much should be obvious. No Beatnuts record has ever been perfect, but it has always been evident that they know what they’re doing. Full-length number six is no different. Though not terribly focused and occasionally uninspired, the bottom line is that the beats are sick. If you are a Nuts fan, like me, you’ll thoroughly enjoy “Milk Me.” If you need some substance to your hip-hop, look somewhere else. Either way, the Beatnuts will keep putting it down. They’ve been doing it longer than most, and they’re still keeping their music fresh. It’s time to recognize.