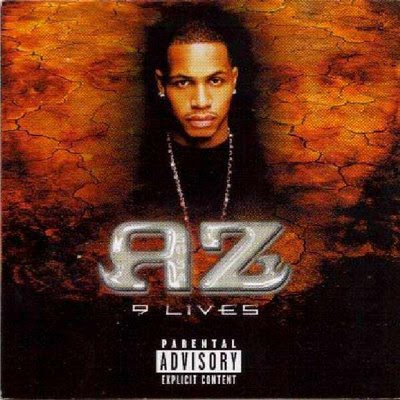 AZ’s, perhaps more than any other artist, has remained an enigma throughout his career. His unbelievable potential was showcased to the world when he dropped what is commonly recognized as one of the best guest spots ever on Nas’s “Life’s A Bitch”. The multi-syllable rhymes, relentless flow, and sparkling lyricism remind me of an ultra-smooth Kool G. Rap. Needless to say, expectations were high for his debut album. That joint, Doe or Die, spawned a hit single, the gold-selling “Sugar Hill”, and sold a decent amount of units, but fell short of the bar that was set by most fans. But it was okay, because AZ was going to become a superstar after The Firm album was released, right? Wrong. Although AZ blazed every verse HE dropped, the album itself was disappointing, and it seemed as though he was labeled guilty by association. To make matters worse, label strife pushed his sophomore album back countless times. And when that album finally dropped, it was considered an underachieving album and received very little praise. Sales were poor as well.

It seemed as though AZ was going to fade away, and only be remembered for that one verse. But last year he came back with the independant album S.O.S.A (Save Our Streets Again/AZ). This album created a great deal of buzz and earned him a deal with Motown records. The aptly titled 9 Lives is probably AZ’s last shot on the mainstream level. How it ultimately fairs remains to be seen, but at least AZ did his job. The album is basically eight new tracks and four tracks lifted from S.O.S.A. The first song, “What Cha Day About”, is a great start. It’s one of those street dream tracks that portrays the ultimate goal as succeeding in life, not being the biggest or baddest. The beat has a mellow and sentimental feel to it, Ali Vegas comes through on the hook, and AZ drops some of the ill lyrics we know he’s capable of:

“Find me from every dimension with few restrictions
From up north to the youth detentions [..]
We all thorough, infected by cruel intentions, but who the wise?
The live got two disguises
The surprise is to know when to utilize this
Stay alert, the street talk and say the worst”

Following this is another banger, “I Don’t Give A Fuck”. This song sparks one of the mysteries of this album: the beat and scratched Nas chorus sounds uncannily like the work of DJ Premier, but Chop D.I.E.S.E.L., comprised of “M. Curry and D. Blyden”, is credited for it. AZ comes more on the bad ass tip this time, delivering well. After listening to the first two tracks, I was incredibly impressed, and knew that with “At Night”, also known as “This Is Projects”, one of the S.O.S.A. tracks following, the CD led off with three absolute bangers, not a bad way to form a lasting impression. “At Night” is another track that sounds eerily Primo-esque, but once again it is credited to Chop D.I.E.S.E.L. Either way, this song is absolutely filthy, AZ flows absolutely flawlessly over the beat… it doesn’t get much better than this.

After these three hardcore bangers, though, the album starts to go commercial. By that I mean the first three tracks were obviously designed to appeal to the underground faction, and six of the next eight songs were aimed more at the mainstream. It’s not entirely a bad thing, but it is a sudden change of tempo. “AZ’s Back”, and incredibly Timbaland-sounding beat credited to Tank, is pretty cool. The lyrical content is very stale and played out, but AZ flips the triple-cadence style extremely well, and the song is very catch without being annoying. The next track is the lead single, another song from S.O.S.A., “Problems”. This track is an excellent blend of commercial and hardcore appeal. If you haven’t heard this song yet, you’ve probably been living under a rock.

Speaking of singles, the next one should be “Everything’s Everything” featuring Joe. The uptempo beat is sick, and as club songs go, it’s a heater. Joe comes through with a catchy hook and a little verse of his own at the end. I think this song, released as a single, would easily catapult this album past gold status and give it a chance at platinum… hmm, I seem to remember Joe helping another MC blow up big time. With this song he could do it again. Beanie Sigel pops up for a guest appearance on “That’s Real”, the third S.O.S.A. song. While his kindergarten rhyme schemes are getting old, he’s still cool in limited doses. This song takes it back to the hardcore feel of the first three tracks but doesn’t quite match them. The beat, however, produced by Bink Dog, is tight. I kind of wish AZ had it to himself, though.

His Brooklyn teammate from the Firm, Foxy Brown is on “What Y’all N!ggas Want”. The beat is cool, the lyrics are aight, but the chorus is cornball, and Foxy’s verse is typical bullsh!t delivered in an uncreative fashion. “Let’s Toast” is the final track from S.O.S.A. It uses the same beat as the title track on M.O.P.’s Warriorz, however this song actually came out before that one, so who knows who had it first. Either way, it’s another excellent track.

In one of the biggest wastes of a beat in a while comes “How Many Wanna” featuring Amil. Thank God she’s only involved in the hook, but here mere presence detracts from the song. The hook is corny and the subject matter played out, but AZ comes through decent. The beat, however, is so phat that it makes the song worth listening to… at least until the hook starts. The album closes off with two starkly different tracks, both ill in their own ways. “Love Me” is AZ at his crossover best, overcoming the somewhat cliche subject matter with quality lyrics:

“It’s Illmatic, the shit started, then, never departed
I floss retarded for those lost in the projects
I taught them logic, gave them courses in college
Chase dollars, but to me what’s most important is knowledge”

The beat, produced by DR Period of “Ante Up” fame, is a tight, laid back piano loop. The hook is another well used DeBarge sample. This song is a definite winner. The final track, “Quiet Money TBS”, features yet another money beat, and is one final hardcore banger to close out the album. It features Half A Mil and some other cat I can’t identify (they’re not credited for their appearance), but they come correct.

Overall, this album has some of the best production I’ve heard in a while. Beatwise, there isn’t a single weak track. Lyrically, songs like “AZ’s Back”, “What Y’all N!ggas Want”, and “How Many Wanna” are way below what AZ’s capable of, but on every other song he delivers. He loses some points for these tracks, though. While AZ still hasn’t completely fulfilled his potential, this album is definetly a step in the right direction; in my opinion it’s the best (major label) one he’s released. Let’s hope that others agree so that he can build upon this album and release the classic he has the ability to produce.