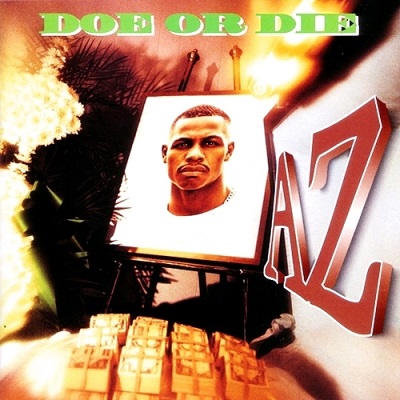 First of all, I’d like to make a correction to something I said in a previous review. I stated that in my opinion, AZ’s “9 Livez” was his best album to date. I’d like to retract that statement, if I may. At the time I was enamored with the album, so I made a bold statement. Now, months removed, I have to say that I was wrong; while that album is still dope, it does not have the same replay value as AZ’s first project.

That said, let’s examine what exactly “Doe or Die” was all about. For starters, the album was one of the most anticipated (at least by underground heads) of 1995, based on AZ’s flawless appearance as the only guest on the legendary Illmatic. Expectations were high, and the fans were growing impatient. They needed to see if AZ could replicate the excellence he displayed on “Life’s a Bitch” for the duration of an entire album. The answer is well, yes and no.

The lead single “Sugar Hill” was perhaps a little more commercial sounding than heads were expecting, but was incredibly well received nonetheless. L.E.S.’s silky smooth beat, Miss Jones chorus, and AZ’s tight flows created one of the greatest summer time joints of all time, and it still puts a smile on my face every time I hear it. The single went gold, and it appeared that AZ was on his way to stardom.

But unfortunately, it wasn’t to be. The album dropped too long after the buzz for the single had died, sales were somewhat disappointing, and the album failed to spawn another hit. Still, let it be said, this album DOES deserve to be mentioned right alongside “Only Built 4 Cuban Linx”, “It Was Written”, and “Reasonable Doubt” for popularizing the Mafioso style fathered by Kool G. Rap. In fact, it dropped before two of those three albums did.

The album’s only flaw is that it’s at times inconsistent. The first real song “Uncut Raw” is done in by a lackluster, nondescript beat. The following joint, however, does not have the same problem. “Gimme Yours”, produced by Pete Rock, has a great laid back feel. Nas appears, singing the chorus, with an off key yet undeniably catchy appeal. AZ flips the multi-syllables he’s known for, spitting about stacking dollars and selling drugs. While the subject matter might be common place these days, back in 1995 living it up Scarface style was not the norm in 1995. Plus, AZ does it with so much style, it has not lost its edge even in 2002.

The excellent “Ho Happy Jackie” follows, with the beat provided by D.I.T.C. legend Buckwild. The beat is pure excellence, and AZ flows ridiculously over it, warning all men to watch out for the Ho Happy Jackies out there:

“Whoever thought of that sweet thing, born model material
That hated hot cereal would grow to be a high silly hoe
Really though, it’s a shame for this damn thang
Cuz everything’s brand name, when will she get enough of these damn games
Struttin with an unbuttoned blouse, like it ain’t nothin
Draggin her wagon, knowin fellas be flaggin and frontin
Hopin, by keepin gear, wear and hair dope some really big willie nigga would dig her and get open…
the hell with flyest, she slidin with the highest bidder”

To me, the best joint on the album is a toss up between Pete Rock-produced “Rather Unique” and D/R Period’s “Mo Money Mo Murder” which features Nas. The former features a vintage beat from one of hip hop’s greatest, and AZ drops some wizard like lyrics on the joint:

“Too hard to follow, you took a bite but couldn’t swallow
Your mind’s boggled, but I’m as deep as Donald Goines novels
My whole persona’s kinda laid back like a recliner
And since a minor, I been fuckin with marijuana”

The latter features production from D/R Period that is very close to perfection. Nas and AZ deliver the kind of track that makes them one of the most famed teams in hip hop history. Here’s one of Nas’s gems:

“So now you rollin with us, like co-defendants
No phony business, so know the difference
From supreme soloists, whose styles as ancient as Moses scriptures
It’s Latin Kings, black khufis, and white justice
Amongst us, crime invades the mind of youngsters
Where it’s pitch black, they can’t see you
Godfather 3, four left for dead in a cathedral”

The smoothed out, funky title track and the conscious “Your World Don’t Stop” are also noteworthy. The inconsistency comes in the form of “I Feel For You”, “We Can’t Win” which is lyrically very on point but the beat is forgettable, and the unnecessary remix of “Sugar Hill” which is nowhere near as good as the original.

Despite the shortcomings, the good tracks on this album are not just good, they are great! There are four that I would refer to as certified classics. The main problem with the album is that it COULD have been an all time classic ITSELF if executive production had been better and the beat selection had been a little more on point in several cases. But all in all, this album is a slept on gem that should be in every true head’s collection. Trust me, even if you didn’t like a single song on the rest of the album, “Gimme Yours”, “Ho Happy Jackie”, “Rather Unique”, “Sugar Hill”, “Mo Money Mo Murder” are songs that I PROMISE you will feel, and make the album worth the price of admission on their own. Instead of buying an album from the latest thug clone MC rhyming over recycled sounding beats, go pick this shit up instead; you’ll get all the gangsterism you need with a touch of class and style.