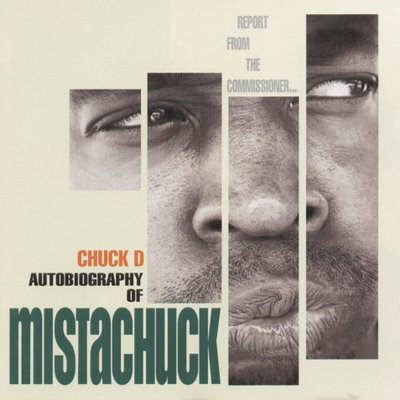 If you don’t know him, you can call him Mistachuck – but if you do you’ll recognize right away that this is the solo album of Public Enemy’s frontman. No one artist in hip-hop’s history may have ever been silmutaneously more well-respected and misunderstood than Mistachuck; which is probably what prompted him to do this side project in 1996 and get some shit off his chest.

There’s no denying that the shit hits the fan right away on the lead single “No” – a song overlooked by a lot of P.E. fans and hip-hop heads in general. It’s hard to understand why when listening to this track – one that features an ill Hydraulic Funkahaulics instrumental background and some deceptively simple lyrics that indict everything that was wrong with hip-hop in ’96; although the eerie thing about this song is a lot of it rings as true if not truer today:

“No sucker-tash, no ‘girl I got the cash’ raps
No sex traps, no Rolexes no unprotected sexes
No false hopes, no hang ropes, boats, no car notes
No killers, no vanilla, no Bigger Willies or Wilmas
No jail time, no fuckin little kid rhymes
No studio terrorists, no mirrors, look ma no spelling errors”

In typical Chuck D fasion, he pulls no punches on any of his beefs with ignorant behavior or negative influences. “Talk Show Created the Fool” does an excellent job of condeming Jenny Jones and Jerry Springer, but the stinging chorus “laziness, is in the house, fat slobs with no jobs, is in the house” might make the point even better. Borrowing a page from Chris Rock (or perhaps Chris borrowed it from him) Chuck D writes “But Can You Kill the Nigger in You?” which allows him to vent his frustrations over fellow black men who can’t get right and live right. This is a track which probably would have been controversial if the album ever achived wider exposure, but on it’s own terms without the song title is no different from his larger catalogue of work, echoing songs like “Nighttrain” from “Apocalypse ’91” where Chuck D made it clear that “every brother ain’t a brother”:

“Quiet as it’s kept, some of y’all just slept on yourself
Next time you hit the mirror black turn your back on yourself
I wouldn’t trust some of y’all if you was my right hand man
I cut it off at the wrists, like your name was Benedict
Enough lead, to threaten fifty niggaz dead, you said
Cause niggaz is back to perms and relaxers all up in their head
TV niggaz only make you laugh, embarassed can you catch it?
Nigga fever new season of modern day Stepin Fetchit’s”

It’s too bad Spike Lee couldn’t make “Bamboozled” nearly this on point – maybe Chuck D should have written the screenplay. Chuck does have some straight up rhyme wrecking for the fun of it too though, as when his homies B-Wyze and Dow Jonz flex nice snap skills on the subtle funk of “Endonesia”; although the effect succeeds less well on “Paid” when he lets Melquan and Kendu bless the mic – although the scratched in Biggie sample helps give it more flavor. Mostly though Chuck sticks to pulling cards and criticizing what’s wrong with the world – the things he does best. While you’re still left analyzing the sly wordplay in the chorus of “Generation Wrekkked” (“If I can’t change the people around me, I change the people around me”) he even takes the opportunity to brag about it to all those “who didn’t recognize how great and clever some of these rhymes be.” The only inaccurate thing about that statement was the word “some” – Chuck’s strong baritone and powerful words have made him a musical legend and lend credence to even the weakest of P.E. albums such as “Greatest Misses.” The truly greatest miss though may have been the people who slept on Chuck D when he went solo.

Even when “Autobiography of Mistachuck” might have the tendency to go preachy or stale the Bomb Squad production of Gary G-Wiz and Eric ‘Vietnam’ Sadler keep things in perfect focus. Most stores have this album available for just a few dollars used; and the return on that small investment is great indeed. Even those who are not fans of Public Enemy per se but of goodintelligent hip-hop in general which is paired with high quality beats can’t afford to pass up this wrongly slept on album. Mistachuck got some things to say; the nation would be well-advised to listen.