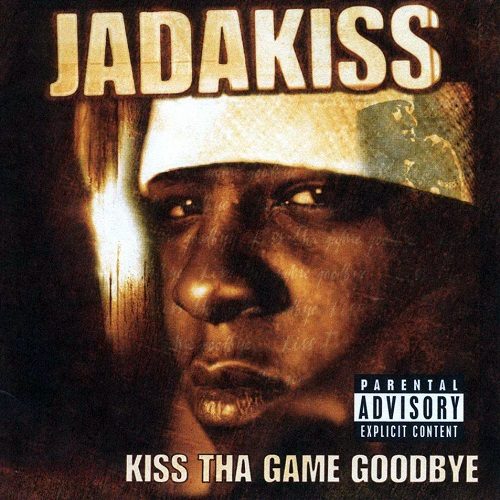 Don’t be scurred; thankfully, “Jada’s Got a Gun” doesn’t feature Aerosmith. After that initial shock on track two is out of the way, the best known rapper from The L.O.X. spits out sixteen more songs and three skits on his self-referentially titled “Kiss Tha Game Goodbye” debut. ‘Kiss has been building up to this for a while now; routinely dropping (so-called) hot shit on mix tapes, cameo appearances, and duets with fellow Ruff Ryders. Now at last, it’s Jada’s time to shine on his own.

Well, sorta. If you’ve already heard the lead singles “Put Ya Hands Up” (produced by Wayne-O) or “Knock Yourself Out” (from the Neptunes) you’ve probably come to expect a straight solo shot. That’s misleading, because cameo appearances by Ruff Ryders alone comprise six tracks. Other big names pop up as well – Nas on “Show Discipline”, Snoop Dogg on “Cruisin'” and Carl Thomas on “Nasty Girl” among others. Like most allegedly solo rap LP’s these days, the star has a revolving cast of extras but rarely spends time shining on his own.

That’s not to say the cameo appearances aren’t worthwhile; in fact they help shore up an album which might have been weak on it’s own. The beats vary in quality greatly – “Show Discipline” has a serviceable sample from “I’ve Been Watching You” which is a TAD overused, but “We Gonna Make It” featuring Styles has a superbly symphonic arrangement by Alchemist. “None of Y’all Betta” has a surprisingly generic (albiet well-produced) beat by DJ Premier, but “Nasty Girl” has a typically upbeat and energetic Timbaland track; although in fairness you might have mistaken this for a Neptunes beat (or vice versa).

As for the raps, I have to confess a personal bias against Jadakiss. Despite his current popularity in the rap scene, I’ve never felt he had a strong vocal tone, impressive flow, or well-constructed lyrics. While some may jock his “And y’all scared I can tell/cause I’ma get Bucks like Milwaukee, cause like Sam I Can-sell” analogies on “Put Ya Hands Up” I automatically give full point deductions for using full names for similies in rhymes. These days it seems like rappers look for the quick “Oh yeah I caught that pop-culture reference” recognition from their audience; without recognizing they condemn their own albums to a short shelf life. Suppose Sam +can’t+ sell? In the past rappers at least tried to rhyme already legendary icons like Muhammad Ali or Michael Jordan. It’s cute to reference “American Pie” or “American Beauty” but you have to wonder what happened to “American Graffiti.”

Nevertheless by keeping an open mind and ignoring my bias against his unenthusiastic monotonal flow, I did occasionally catch a chuckle or two. “And you might win some, but you just lost one, ‘Kiss miseducate ’em like Lauryn Hill” actually gave me an ear to ear grin on “Knock Yourself Out.” Styles and ‘Kiss tag-team on the twisted (but true) line “Might find your man dead in the ocean (he be aight though) you know dead rappers get better promotion” on “We Gonna Make It.” Even though Jadakiss is not going to win any Putlizer prizes for these rhymes, they’re really no better or worse than any already existing New York thug rappers.

This review is probably not going to change many minds. People who already liked Jadakiss will view this as confirmation he was aight; people who thought he was wack will view this as scathing critique. It’s both – songs such as “Kiss is Spittin'” with Nate Dogg and the all-star “It’s Time I See You” (produced by Swizz Beatz and Just Blaze respectively) are winners, but the strange “What You Ride For?” with normally good rappers Fiend, Yung Wun and Eightball is almost as misguided as tired cliches of “Keep Ya Head Up.” Does anybody honestly care if Jadakiss tells shorties to stay in school and not do drugs? Hell no, not from this dropout who blows pounds of ‘dro. Accept the contradictions if you got $13.99 to spend, and kiss the money goodbye. The album’s as little or as much as you expected.