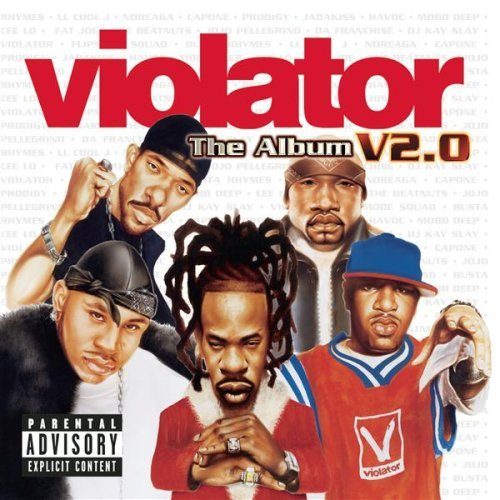 It’s safe to say that last time around the “Violator” compilation album wasn’t taken very seriously. The album and associated record label were spawned from ‘Baby’ Chris Lighty’s management company of the same name; and a majority of the rappers whose careers he has successfully guided appeared on it. The LP could have been as large as the album song “Heavy Weights” with Big Pun, Eightball and Fat Joe; but instead featured half-ass contributions from both established and new rappers alike. Many heads openly hated the dance club single “Vivrant Thing” by Q-Tip (and/or questioned his career choice) while the album’s few gems such as the (allegedly) post-retirement flows of Mase on “Do What Playas Do” or the Busta Rhymes “Bus-a-Bus Remix” were overlooked completely. Too much filler and too little genuine talent made most purchasers feel they were the ones who got violated.

Things have changed since 1999 though. Lighty wisely chose to break with the once formidable Def Jam Records and link up with Loud Records for this new improved release. In sound and style, “V2.0” is as big a quantum shift as Windows 95 was over it’s predecessor Windows 3.1. The spartan Neptunes sound of the lead single “What it Is” with Busta Rhymes and Kelis exemplifies the attitude – lean, mean, and clean. With Busta’s magnetic personality coming off even louder at a near whisper, he injects the track with ALL the energy a certified banger needs. Not content with this success though, the Neptunes strike while the iron is hot on the immediately following “Grimey” by Noreaga. While not as lean as it’s predecessor, the track still relies on Noreaga’s aggressively energetic flow and humerous quips like “so much brains I’m startin to feel smart.”

This isn’t even Noreaga’s best offering on this album though – he really blows the door off the hinges on the duet “Come Thru” with ‘Holiday’ Styles from The L.O.X. The production by Self is simultaneously odd, humerous, and totally perfect – combining excerpts from the Vanity Fare song “Early in the Morning” with a thumping bassline and clever thug-isms by Noreaga that prove the rapper is seriously underestimated by his contemporaries:

“I’m sick of rappers talkin bout, all this cheddar
And when you see them in the streets, got a bullshit Jetta
I’m like dawg – stop frontin, you shouldn’t be braggin
And why the fuck you got rims if you push a Volkswagen?
I spit vicious; let my bank account switch digits
And if money was height – you’d be midgets”

This album is full of such unexpected and pleasant surprises. One of the oddest is Goodie Mob member Cee-Lo blazing up a high-octane energy dance called “Sexual Chocolate” with his voice oversampled to TWICE the normal speed of his Southern drawl. Before you scream in terror, keep in mind that Sir Mix-A-Lot successfully used the same technique on “Buttermilk Biscuits” – and on this track Cee-Lo’s voice is MUCH better recognized and identifiable. Up-and-coming rap crew The Outfit greatly benefit from the haunting violin sounds of their spine-tingling debut track “Die 3.” Ja Rule and Missy Elliott hook up to swing an ep on “Ex” – short for ecstasy, of course. Newcomer JoJo Pellegrino even gets away with doing a re-interpretation of Eric B. & Rakim on “Fiend” that won’t insult fans of the hip-hop classic; in fact, it pays nice tribute while at the same time featuring smart brag raps like “MC’s get brain tumors/I’m Anthony Sr., they Jackie Juniors.”

There’s something for nearly everybody on this album. The D-Funk singing of Butch Cassidy perfectly matches with the cold as ice “Kiss you now, you die now, why later?” flows of Jadakiss and Prodigy on “Livin’ the Life.” The very convincing “Next Generation” manages to mix up the funk of Teddy Riley and James Brown while Pellegrino mixes up raps with everybody from Cadillac Tah to Fabolous and Remy Martin. The only cheap move on the whole CD is re-using the beat from Busta Rhymes’ “Bla-dow!” for the song “Can’t Get Enough” with Meka, Spliff Starr and Rah Digga – but the since the original was not a huge hit for Busta they can probably give this loop a little more shine. It’s also a little confusing as to why the songs “U Feel Me” and “Options” were both crammed onto track 11 instead of being seperate cuts, but listening to both songs is so pleasant this is a minor complaint. Even L.L. Cool J sounds surprisingly raw on “Put Your Hands Up” – a quality track many haters would never recognize as being yet another Swizz Beatz production.

By avoiding the mediocre mistakes of the first edition and giving up a collection full of well-conceived and profesionally rapped tracks, the stars come off as truly collaborating on a great project instead of throwing away leftovers from their own LP’s; and the newer artists gain stature from sharing their spotlight. This album is everything “Violator – The Album” wasn’t and has truly earned the right to be called “V2.0” – it’s an upgrade worth owning even if you never installed the original.