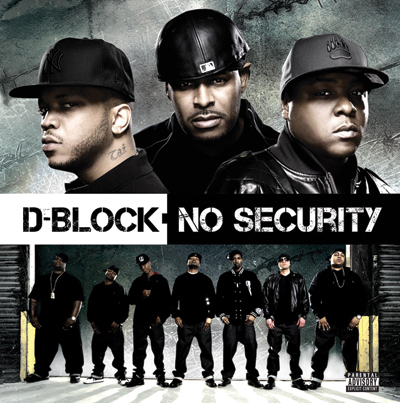 Styles P, Jadakiss and Sheek Louch have remained popular and successful as solo artists who collaborate regularly, keeping their Yonkers roots strong for over a decade. Instead of permanently reuniting the group formerly called The LOX, 2006’s “Peer Pressure” spotlighted an extended family of artists the trio had approved for D-Block membership. While “Peer Pressure” was the last official D-Block release to hit major retail chains, it made a minor impact at best. None of D-Block’s hand picked proteges possessed the charisma, vocal delivery or lyrical talent of the founders, leaving the album a frustrating and ultimately disappointing experience.

2009 brought much higher hopes for “No Security.” While “Peer Pressure” just barely crossed the line from street vendor mixtape to professionally produced CD, “No Security” promised to be an all-the-way official release from E1 Entertainment (formerly Koch Records). The “Get That Paper” video suggested that LOX themselves would take the lead role, the only three people called D-Block that anyone really wants to hear from. Jada’s verse in particular suggested a rebirth of the crew’s former prominence in the NY hip-hop landscape, long before their relationship with Bad Boy broke down.

“Yo, speedin in the left lane
Cause this is just a steppin stone to the next game
Either that or in the hood with the best ‘caine (yep)
Little league from rotary to exchange
And I still remember when the first checks came
Roof in the trunk is how the new Lex came (woo!)
With the air holes is how the new tecs came
Figure that the higher I get, the less pain
You dudes is playin checkers but it’s a chess game
Soon as I hit my number, I’m on the next train”

Crada from Motion Music creates a smooth, laid back vibe for the trio to flow over, while newcomer S.I. does an acceptable job crooning the hook. “Get That Paper” is one of those “please all, insult none” hip-hop tracks where D-Block’s thugged out rap fans will feel they kept it real while newer audiences unfamiliar with their history would be drawn in by the friendly sound. “No Security” is unfortunately apt though, because the blanket of dopeness that shrouded this release ultimately proved to be moth-eaten. It’s admirable that the D-Block members want to turn over the reigns of their empire to a new generation, but it’s a little hard to crown someone new when not nearly enough people recognize the current rules in the first place. Take “That’s D-Block” for example – a five minute parade of totally anonymous D-Block familia with names like Large Amount, Snyp Life, Bucky and Straw. If the founders of the crew played the stars of the song and introduced just ONE of these men with ONE cameo verse, he could be perceived as a future star. Instead by the time the song’s over, the only thing memorable about it is the hard-rocking Vinny Idol beat and the closing verse from Styles P.

The press release that accompanied “No Security” is somewhat telling. “Fans have been waiting for this album for 5 years and will be thrilled to hear the latest COLLABOS from Styles P, Sheek Louch and Jadakiss.” COLLABOS?! That’s not what I waited five years to hear. “Get That Paper” was what I waited five years to hear – the return of The LOX, a group of artists who have always been interesting individually but collectively have a gestalt dynamic greater than the sum of their parts. By offering collabos with the unrecognizable second and third tier artists, then not giving any of them shine beyond “we just happened to wind up on a compilation album fronted by The LOX so you have to like us,” the opportunity to give their fans what they REALLY wanted is totally botched. Even worse, D-Block are doing their up-and-coming proteges a disservice by not willing to put one or two rappers over strong. When everyone gets the spotlight NOBODY gets the spotlight.

Despite the album’s flaws there are a few songs that work anyway. “Brother’s Keeper” is the original LOX plus JUST ONE new artist – Bully. Thanks to a banging Minnesota Boyz piano beat and the company he keeps, Bully actually comes off as a star. He can also be heard on the smooth “Hustler’s Prayer,” although comrade Straw is much less convincing and waters down the track’s impact. “Get Ya Bounce On” works for the beat alone, but otherwise is the perfect example of “less would have been more.” If you were expecting The LOX back, pass on “No Security.” If you don’t mind that they play a minimal role in an album they were otherwise billed as the stars of, “No Security” may get a pass, but it’s not really a must buy. You could just as easily cherry pick the songs you really like off iTunes and skip the CD as a whole.