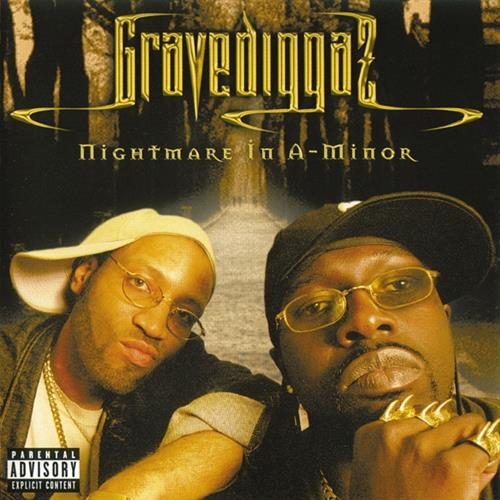 Jadakiss and Styles once rapped, “Might find your man dead in the ocean; He be aight though – you know dead rappers get better promotion.” If that statement is literally true, then this album should be the greatest success in the career of the Gravediggaz. After the initial success of their debut album “6 Feep Deep” (a.k.a. “Niggamortis”) they followed up with the respectable but poorly selling “The Pick, The Sickle, and the Shovel.” Was this a case of sophomore slump? Perhaps, but they had a strike against them from the beginning: the absence of producer wunderkind Prince Paul. Coupled with a lack of promotion, most heads presumed that their rap style, dubbed “horrorcore” by critics, was a one-trick pony and lost interest in their product.

To add insult to injury, group member Too Poetic a.k.a. Grym Reaper started to suffer from the withering effects of an invasive metastatic cancer which ate his body from the inside out. Wrly humerous to the bitter end, Grym Reaper dubbed himself “Tony Titanium” during his painful chemotherapy and vowed to survive to record a solo album. Unfortunately, his prediction proved to be false – and hip-hop lost another of it’s most talented, powerful, and ultimately fragile rap artists. Next time you buy a 40, pour out a little on the curb for Too Poetic – a decade long veteran of the rap game who in his darkest hours was still giving his all for the music and the culture that he loved.

The strength of his persona and rap flow was one of the strongest factors in the Gravediggaz success and staying power in the underground, even when the mainstream abandoned their music. Together with Frukwan a.k.a. Gatekeeper but minus the now completely absent RZA, the re-energized duo laid it all on the line for what ultimately will be their final album. It is a fitting testament to Poetic’s life for this LP to be released posthumously, an album of poetry firmly grounded in street science haunted with vivid imagery of the surreal, such as on “Guard Ya Shrine”:

“I’m the soldier with the bloody red hands
These ghetto alleys become dead valleys
Snakes too shook, to show up at the rally
Self paralyzed by the thought, of bein analyzed and caught
up in lies and falsehood, it ain’t all good
in New York, if you don’t walk the walk
I dare fuckin parasites, to grab a mic
The Grym brings farenheit, and blinding light”

For most of the album, the production keeps up with the lyrics; produced mostly by Poetic and Frukwan, but also featuring work from True Master, Diamond Track, and even L.G. on the spooky interlude “Last Man Standing.” Among the best tracks are True Master’s “Burn Baby Burn” and “Nightmare in A-Minor” featuring 4th Discple and Baretta, while “Better Wake Up” and “Killin’ Fields” by Poetic or “Zig Zag Chamber” by Frukwan are equally dope. There are sadly a small amount of reject tracks though – the messy “Running Game” and overly simplistic “Wanna Break” both by Frukwan aren’t good enough for this final album musically. It is also dissapointing that RZA couldn’t even contribute a track to this album let alone a single rhyme – furthering the rumors that he split with the Gravediggaz over bad blood and couldn’t even reconcile when Poetic was on his deathbed.

“Didja know Christ is me? Reincarnated in a MC
I came to the hookers, pimps and the killers
The thievin ass niggaz, my soldiers, guerillas
Nine to five cats and drug dealers with gats
I’m P-R-O black but y’all already know that
Fuck a horrorcore, I bring holy war
Cold and raw as it bubble and ya moan through your pores
My soul soars, way above Armageddeonites”

Poetic’s powerful verses as seen above on “Current Events” prove RZA’s absence on this album to be ultimately harmless. Even though Frukwan provides excellent verbal support as the Gatekeeper, it’s the Grym Reaper who consistantly steals the show throughout; perhaps as it should be on this final testament to his career in rap. It seems as though this album may languish in obscurity though; as independent Echo Records may not have the strength or connections their former label Gee Street did through Island or BMG. If in fact RapReviews.com had not received the album through the courtesy of Poetic’s management firm, I might never have heard it at all. I have never once seen it in stores, though I hope after this review I do because it’s already available for sale in Europe.

Through the concerted effort of a great many dedicated artists and individuals, this album is indeed a fitting epitaph to a man whose nom de plume in Gravediggaz may seem ironic to some. For those who really know him the name Grym Reaper was not at all ironic – because he only came to take life from the LIVING dead; those who had not opened their eyes up to the truth. In the years to come, this Gravedigga will live beyond his own death both as an inspiration to other artists and as the powerful voice of the ghetto that he always was.