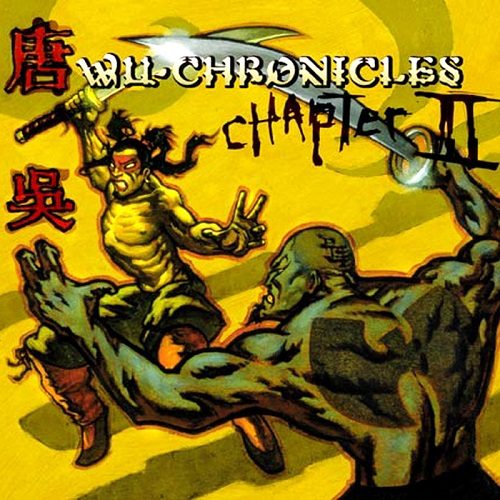 The Wu’s dynasty in hip-hop is unquestioned. Like the martial arts they have immortalized and the films from which they drew inspiration, their records are now indelibly a part of the pop culture pantheon. The seed they planted on “36 Chambers” not only grew and flowered but spread offspring to the wind, creating hip-hop explosions wherever they landed – even strong enough to crack concrete just to take root.

History has taught us though that if anything is true about a dynasty is that it ultimately fails. Leaders are assassinated, royal families get snuffed out, and revolutions sweep aside the old ways for the new. Usually these history making events occur at a moment when the elite grow complacent in their success and let down their guard; failing to recognize the tsunami sized wave of revolution building off shore and heading straight for the center of power.

This “Chapter II” of the Wu dynasty is not altogether unpleasant, but may cause a vague uneasiness in the heart of any Wu-Tang fans – to whit it comes across as a bit smug and complacent. While the first volume of the “Chronicles” captured some genuinely brilliant Wu-Tang moments that some fans may have missed (including appearances with the Tha Liks, Heltah Skeltah, Mobb Deep and Notorious B.I.G.) along with select classics from their catalogue, this album seems to lack the depth or seasoning of that last effort.

No one can question that leading the album with “Above the Clouds” by GangStarr and Inspectah Deck is a stroke of brilliance, but after that the clear waters get murky. The unknown Wu artist Two Da Road drops a cut called “Re-Up” featuring Shyheim, a Wu artist whose own moments of brilliance are erratic at best – the result being an unremakable cut. If you think this is bad, just listen to him say “word to my mother I think they eat Hostess” on the equally lethargic “In Trouble.” He actually gets defensive about his lack of appearances on Clan albums by saying “It’s best I’m kept secretive” and he’s right, but for all of the wrong reasons.

This embarassment is made up for by better cuts such as “Hip Hop Fury” by the GZA, the seminal “Gots Like Come On Thru” by Buddha Monk and the snappy “Three Amigos” by King Just rocking with Method Man and Sic. As good as these tracks are, they’re not really the cream of what the Wu catalogue has to offer; especially considering how deep it runs. There are any number of slept on songs from the solo albums let alone the b-sides, soundtracks, and cameo appearances that are much more deserving. What about the demented “Studio Ton” remix of “Shimmy Shimmy Ya” by Ol’ Dirty featuring E-40 and MC Eiht? How about “Street Opera” by Killah Priest? No doubt the slamming “America” from the _America is Dying Slowly_ compilation album merited inclusion. “Dangerous Mindz” by the Gravediggaz is a dope cut, but the second album isn’t that hard to find – so why not include the much rarer “Mommy, What’s a Gravedigga” Cali Mix?

The problem with this compilation is that its purpose is entirely obtuse to the average Wu fan. A few rare gems like the RZA remix of “Eyes a Bleed” by Bounty Killer and treats like the “Wu-Tang Clan Live Freestyle” featuring GZA and Masta Killa will have the heads open, but mediocre offerings like “Only 4 My Niggaz” by the Black Knights do not deserve the same limelight. The selection choices seem at best erratic and at worst completely haphazard. On a personal note I am glad to see they included the darkly spooky “Greyhound Part 2” by Killah Priest and the Jon Spencer Blues Explosion; but there’s not much else to crow about. Only a few of these songs are really bad, but only a few are true gems – a lot of the rest are either average or slightly above average. A Wu-Tang compilation should be the best of what this great crew has to offer, but instead the flowers seem wilted and the vase is cracked. The message I offer the Wu-Tang is simple – complacency will quickly kill your dynasty.