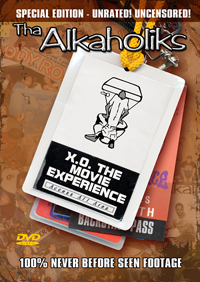 With the increasing popularity of the DVD format and decreasing cost to the consumer to acquire discs and players, it was inevitable that hip-hop DVD’s would start to blow up.

Of course the question that inevitably leads to is “What constitutes a hip-hop DVD?” On the one hand any movie that’s predominantly about hip-hop can be if converted to the CD sized discs: “Krush Groove”, “Wild Style” and “Breakin'” among others. Another form of hip-hop DVD is a collection of music videos by one rap artist, group, or record label. In fact, DVD “singles” such as Wu-Tang Clan’s “The W: Volume 1” will be increasingly popular in the future due to the fact that for only a dollar more than most CD singles they offer twice as much bang for the buck: audio AND video.

What is emerging in the 21st century though is a hip-hop DVD in a format not seen since Public Enemy’s “Tour of a Black Planet” videotape. Part music video, part artist biography, part live tour footage, these DVD’s take an old concept but package it in a way that will be instantly appealing to hip-hop heads. Think of it this way – what’s the one thing absolutely everybody hates about videotape? If there’s one part of your favorite movie, one favorite video you taped, or one favorite episode of your favorite show you want to see it takes FOREVER to rewind or fast forward to that one spot. Not only that, it’s damn near impossible to hit it dead on – you take a shot in the dark and then hit play to scan through the tape when you THINK you’re close.

With DVD, those days are long gone. One of the most instantly enjoyable aspects of Tha Alkaholiks DVD “X.O. the Movie Experience” is the fact that the disc is split into 36 “Chapters” which are akin to “tracks” on a typical compact disc. How you select chapters depends on the type of DVD player you have, but from the title menu you can pull up a “scene selection” and instantly skip to any part of this release. Want to see Tha Liks perform “Daaam!” live? Chapter 4. How about the making of the “Best U Can” video? Chapter 15. Spend a day in the life of J-Ro? Chapter 20. The technology is easy to take for granted, but playing with this DVD makes me wish those old Public Enemy videotapes would be remastered and coded to disc because it’s SO much easier.

Although the convenience of the DVD format alone makes the experience enjoyable, it’s content that matters the most. If you follow the content of “X.O. the Movie Experience” sequentially from start to finish, the experience at hand is an Alkaholiks concert with extra material of Tha Liks having fun, recording tracks, or clowning for the cameras spliced in. There’s no “plot” other than that, and don’t expect a narrator or an omnipotent voice to comment from on far about the hijinks contained within. In fact, this DVD is about as uncut as you can get – you’ll see prodigious amounts of alcohol and weed consumed throughout and endless shots of breasts being uncovered or shown off for the cameras. So much T&A is displayed during the “Snoop Dogg Tour” footage alone (which doubles as a homemade video for Tha Liks “My Dear” w/ Defari) that it could actually double for a porno movie!

Obviously this release is meant to appeal greatly to people who have been down with Tha Alkaholiks since “Make Room” and “Only When I’m Drunk” and it succeeds brilliantly here. For anybody who has never had the pleasure of seeing Tha Liks live (or lives in a backwards minded city who won’t let them be booked at any club) the DVD captures the excitement and insanity of their performance to the fullest. Tha Liks are that back to the roots type of group that doesn’t believe in pyrotechnics or DAT’s – they just hype up the crowd with their own energetic show. For me the extras are just as entertaining if not moreso. Chapter 6’s “Studio With Xzibit” feature has E-Swift performing camera duties while X to the Z is actually penning his lyrics for Tha Liks song “Bar Code” and then subequently recording his vocals. Multiple takes of the session are run during his actual rap – flipping seamlessly from him shots of him in the vocal booth to standing outside the studio practicing or rapping along to the song post-production. The description doesn’t nearly do it justice, but rest assured that it’s TIGHT fo’ sho’!

The “bonus” features not in the movie itself are not bad – in fact it includes the low-budget and VERY sexually explicit video that Tash filmed for the song “Anotha Round.” The video actually shows some good directing potential and probably could have aired on BET or MTV minus the blatantly pornographic scenes strewn throughout – but for home video only it’s good clean fun.. well maybe not so clean, but still fun! A Likwid Crew freestyle is included, as well as a concert rehearsal for the song “Bar Code.” The only pointless extra is a shot of Tha Liks showing off their b-ball skills (or lack thereof) to a beat much like the infamous Nike commercial produced by Afrika Bambaata. I can’t prove it of course, but it looks to me like the segment was shot in front of a blue screen and superimposed over video of a real basketball court. Either way, not worth the time.

If anything about this DVD can be said to be dissapointing, it’s that Tha Alkaholiks couldn’t or didn’t include any of their actually aired music videos to date, such as “Daaam!” or “Best U Can.” My theory is that Loud Records owns the rights to these music videos and that even if they wanted to include them on this release the label wouldn’t allow it. I suspect at a later date they will sell a DVD akin to the Arista release of Run-D.M.C.’s “Together Forever” which compiles all of the videos together with a few extras thrown in. This DVD succeeds at it’s primary goal though – capturing the manic and often drunken energy of Tha Alkaholiks which fuels the entertainment of their CD’s and tour performances. Casual fans will want to rent it, diehard fans will want to own it, and hip-hop heads in general who aren’t familiar with Tha Liks owe it to themselves to see it at least once.