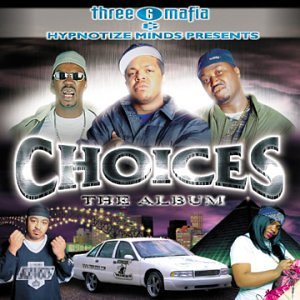 Categorizing this album is a tough call, even before writing a review. Ostensibly this is a “soundtrack” for the movie “Choices” by Three 6 Mafia and Hypnotize Minds Entertainment. This isn’t a theatrical release though – the “Choices” movie is straight to VHS and DVD. There’s a not inconsiderable chance most people who buy this album may never even see the associated film. On the other hand, this is not strictly a Three 6 Mafia album. The majority of songs are either by or mainly feature Three 6’s rappers in various combos, but other artists like Ludacris, Project Pat, and T-Rock are found throughout.

What makes this a Three 6 album ultimately is the production, which is done entirely in-house by DJ Paul and Juicy ‘J’, a.k.a “Da Super Producers.” That braggadocious title is actually quite apt – these producers/rappers are the TRUE Tennessee Titans. With hit after hit such as “Tear Da Club Up”, “Who Run It” and “Sippin’ on Some Syrup” the Hypnotize Minds family has added their uniquely different style of Southern hip-hop to the national rap diaspora that bumps in Range Rovers from coast to coast.

Not surprisingly, beats are the biggest strength of this album. The opening song “2-Way Freak” is a perfect example of the sophistication of their sound. Multiple layers of audio are sandwiched together: a catchy pager ringtone that’s emphasized with keyboards, a wavering symphonic backdrop, a thumping bassline, and a drum track which is subdued enough to tie it all together without overpowering the other pieces. Even the sound of the basic pager ring going off has a surprisingly melodic sound in this mix. This sound proves why Three 6 has been stringing gold and platinum albums back to back for years running.

The songs on this “soundtrack” vary from comedic dissertations to typically hardcore Southern bravado, from “Baby Mama” in the former sense to the Lord Infamous solo “O.V.” in the latter. La Chat provides a lot of the comic relief by playing the “trick hoe” role which feminists and social activists alike will find disagreeable – but this ISentertainment after all. As such there is plenty to find entertaining, such as “Dis Bitch, Dat Hoe” featuring Crunchy Black and Ludacris, to the bass drop heavy “Slang & Serve” by T-Rock, to the equally thumping “Mean Mug” featuring La Chat.

Now to be real, if you find bragging about gunplay and “keeping it real” tiresome or uninteresting, this isn’t the album for you. The lyricism structure itself is fairly simplistic – never varying much beyond AABB or ABAB – but simplistic on purpose in that it’s designed to ride with the beat as versus weaving in and out of it. Still it’s hard to stomach banal lyrics like “Now all these niggaz down to meet us or bitches man I got models (ho) / I blow all of yo’ insides up out you and make you hollow (ho) / You smilin in my face but I’m knowin your grin ain’t good (ho) / I steady hear you claimin but you ain’t from my hood (ho)” on “Mean Mug” – and without the mesmerizing piano sounds and bassline found on the song it would be hard to find the value in it.

An ideal Southern rap classic would combine the beats of DJ Paul and Juicy ‘J’ with the wisdom and street smarts of Scarface, or the humor of Ludacris, or the unique combination of both found in Trick Daddy. This review is not trying to insult the rappers of Three 6 Mafia – they have a knack for penning songs with catchy hooks paired with beats that make them instant club hits. It’s hard though to boost up the rating of an album which although musically above average can only be said to be status quo lyrically at best. For riding and rolling “Choices – The Album” would be a great album to dip and hit switches to, but it’s not going to be held up by future generations as an example of Southern rap rhyming at it’s finest.