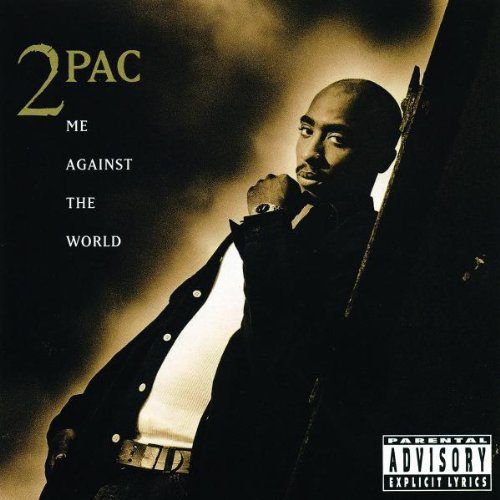 Me Against the World

2Pac :: Me Against The World

Legendary? It goes with saying. Controversial? From the day he first appeared as a soloist, it swirled around him like a hurricane. Actor? Yes. Activist? He was never afraid to speak out. A martyr to hip-hop music and culture? Most definitely. All of these things define the man and the myth of Tupac ‘2Pac’ Shakur, the rapper whose egotistical brashness, charismatic voice and sharp lyrics (ranging from incisive to nihilistic) made him large in life and even larger in death.

The 1995 release of “Me Against the World” fell squarely in the middle of all these definitions and a few not even mentioned. The eeriley foreboding thing about this album is that the videos for “Dear Mama” and “Temptations” were both filmed without him, due to his conviction and incarceration on trumped up charges not worth recounting. In a post-mortem world of ‘Pac, we’ve all become sadly familiar with music videos that at best only feature still shots of the slain rapper or outtakes of home videos shot at the studio or in concert.

This album, perhaps more than any other in his entire career, reflects the maturity of Shakur’s vision and his potentcy as a rap artist. The title of “Me Against the World” itself suggests a man who is unafraid to pursue his vision despite being persecuted, and the title track of the same name reflects that lyrically:

“With all this extra stressin; the question I wonder is after death
after my last breath, when will I finally get to rest?
Through this suppression, they punish the people that’s askin questions
And those that posess, steal from the ones without posessions
The message I stress, to make you stop study your lessons
Don’t settle for less – even the genius askses questions
Be grateful for blessings, don’t ever change keep your essence
The power is in the people and politics we address”

Doesn’t seem to reflect the image that the media cultivated for Tupac Shakur as a thoughtless violent thug, does it? He never was. The irony is that even though 2Pac may be known best for the trash talking he did in the spotlight and on rap records, his roots as a scholar poet and intellectual (which inspired coutnless other freelance writers) gave him far more to offer the rap world than “Thug Life.” While later albums such as Death Row’s “All Eyez On Me” exploited the controversy surrounding his life for profit, this Interscope offering is Shakur at his very best – a pure unfiltered look at his life through the carefully balanced dichotomoy of sensitivity vs. machismo.

The musical production on this album reflects that perfect balance. The somber and haunting “So Many Tears” features a slow groove created by the D-Flizno Production Squad including samples of “That Girl” by Stevie Wonder. So you say that D-Flizno doesn’t have the reputation of Battlecat or DJ Quik? So what! Try to find a groove OR a rap that better encapsulates the pain of urban survival. Pac’s lyrics are brilliant throughout this release, but these are among his best:

“Lord knows I.. tried, been a witness to homicide
Seen drivebys takin lives, little kids die
Wonder why as I walk by
Broken-hearted as I glance at the chalk line, gettin high
This ain’t the life for me, I wanna change
But ain’t no future right for me, I’m stuck in the game
I’m trapped inside a maze
See this Tanqueray influenced me to gettin crazy
Disillusioned lately, I’ve been really wantin babies
so I could see a part of me that wasn’t always shady”

If you have a beating heart in your chest, you can’t not feel the raw emotional energy that Tupac delivers through his words and his voice on this song. Shakur captures a lot of different emotions on this album though. He lyrically sends a perfect dose of hip-hop nostalgia on the SoulShock produced “Old School”, and delivers on the eeriley dark paranoia that made him prophetic about his own future on Johnny J’s “Death Around the Corner.” Tony Pizarro gives Shakur the slow groove and bluesy guitar licks he needs to expressing his undying affection on “Dear Mama” while Easy Mo Bee lets ‘Pac express his freaky sexual side on the bouncy “Temptations.” If there’s a facet of the human experience that’s left uncovered on this release, I can’t think of it.

True to his own versatility throughout, Shakur features a different poetic delivery for each track. Alliteration emphasizes the impact of his multi-layered rhymes on “If I Die 2Nite”, skips over rhyming when necessary to keep his message thorough on “Young Niggaz”, and weaves through the simplicity of the commonly alternating structure of paired couplets to build complexity within “Lord Knows.” If any song uncovers the hidden depths of Shakur, surely this one does:

“You could be next if you want to, who do you run to?
Murderin niggaz, look what it’s come to
My memories bring me misery, and life is hard
in the ghetto, it’s insanity, I can’t breathe
Got me thinkin, what do Hell got?
Cause I done suffered so much, I’m feelin shell-shocked..
And driveby’s an everyday thang
I done lost too many homies to this motherfuckin game
and Lord knows…”

While many fans of the late Tupac Shakur treasure every scrap they are fed from his unreleased archives as a gem, they may in fact be overlooking that his greatest works came while he was still alive. While the post-mortem albums work to preserve a worthy legacy, it is albums such as “Me Against the World” that justify the reason for having such a legacy in the first place. It is fair to say that this is not only the quintessential 2Pac album, but one of the most important rap albums released in the 1990’s as a whole. If it’s not already part of your collection pick it up POST HASTE.

2Pac :: Me Against The World
10Overall Score
Music10
Lyrics10