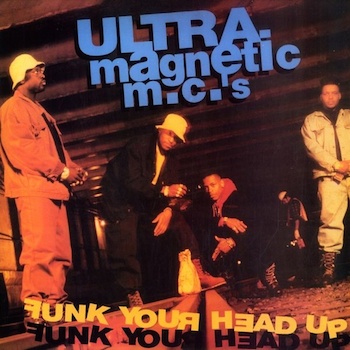 Funk Your Head Up

Ultramagnetic M.C.’s :: Funk Your Head Up

In a rap world where long term memory is fleeting and short term memory almost non-existent, the success of the Ultramagnetic M.C.’s throughout the 80’s and early 90’s almost defied explanation. Many of rap’s most hardcore heads lived from one 12″ single to the next, waiting to see lyrical bombs be dropped. With the success of songs like “Ego Trippin'” and “Ease Back” the Ultra crew had a built in audience just DYING for a full length album; and “Critical Beatdown” didn’t dissapoint. If it wasn’t 1988’s most important rap album it was easily among the top five. Their work as pioneering artists not afraid to flip beats in new ways or display lyrics that discarded A-B rhyme structure as “the same old simple and plain” guaranteed their place in rap history.

And yet, when you drop a classic straight out of the gate, success is often your worst enemy. The expectations built up around any Ultramagnetic album that followed were so high it would be damn near impossible to make the fans happy. Is it any surprise that Kool Keith, their most visible and popular rapper, eventually went solo? The true irony is that while many artists can only capture lightning in a bottle once, Ultramagnetic actually released three great LP’s before finally hanging it up. The commercial failure of the albums that followed “Critical Beatdown” can’t be blamed on lack of artistic inspiration or creativity. Instead, blame half-assed record labels, poor marketing, and a slew of radio programmers who just couldn’t figure out how to fit a group as progressive as Ultra in their mix.

In compiling their sophomore album “Funk Your Head Up,” someone (either Ultra or their label Mercury Records) did make ONE critical mistake which probably hurt them in the market despite their popularity and an eventual four mic review in The Source. That’s right; four mics back when it was so rare that it was incredibly high praise. The single “Poppa Large” was an unquestionable hit. It featured a manic Kool Keith going crazy lyrically AND literally with an accompanying video that showed him struggling with a straightjacket and facially caged a la Hannibal Lector. What was the mistake? Anybody who bought “Funk Your Head Up” quickly discovered that the hit single was in fact a REMIX. In fact, the lackluster Ced Gee beat and bored delivery of Keith on the original practically SCREAM remix. It’s terribly vexing that they didn’t package the album with the remix, even as a bonus track, or as a last resort re-release the album with the remix if they couldn’t master it in time for the CD’s debut. A historical irony is that the single remix ITSELF is almost non-existant. It was sent to TV on 3/4″ and to radio as a promo 12″ single but never widely released to the public. The song was a Yo! MTV Raps top ten hit, but never showed up in Sam Goody or Tower Records. What WAS the label thinking?

Ultramagnetic never recovered from this mistake, and the sophomore jinx forever buried this album in obscurity – well, almost. Years after the single had faded from public view I found this CD in the bargain bin at Co-Op Records for two or three dollars. In fact despite having been a fan of theirs since first hearing “Ease Back” on a compilation album this was actually the first Ultramagnetic album I ever bought. Is it worth $3? Yes, and ten times as much. This album is like the nugget a miner threw away thinking it was pyrite, when in FACT it was pure gold all along. The album has all of the elements of a hip-hop classic – bugged out samples, egotistical brag raps, heavy drum beats, and an irreverant sense of humor that ties it all together into one cohesive whole.

Take the song “Pluckin Cards” for example. Kool Keith was never one to hold his tongue on his opinion, and on this song he REALLY cuts loose. On the second verse he slyly insults Kool Moe Dee by saying, “You dissin James? He’s chicken feed” in reference to his feud with LL Cool J. Then he calls Monie Love and Nikki D “bullcrap” rappers. The third verse is the pies de resistance though – if you remember the rap scene of the early 90’s a lot of BIG New York rappers get dissed one way or another:

“You takin off and you’re gold and for what?
Because you wanna be down and so what?
You buy your African beads from Koreans
Africans, you walkin by human beings
You don’t know, you’re so stupid
Take the books you read you’re still stupid
Learn, see the rappers I burn
You’re coming next, it’s your turn
Let me sprinkle Salt, let me sprinkle Pepa
on doo-doo, and whatever
[…] Huff, and puff, like the big bad wolf
I’m not the man concerned with that story
Look out, watch, you’re Three Feet and Sinkin
The Tribe’s are lost and everyone’s breath stinkin
[Ahhh, to the crossroad!]
Look at one man carry many loads
I gotta move, englighten a sleepy world”

Forget taking sides in X-Clan versus Boogie Down Productions – Kool Keith would rather diss both and be done with it. Of course, the song wouldn’t be nearly as dope without the truly insane samples such as “You can’t even focus the energies of your own body! How can you hope to tumble the God of War, against his will?” It sounds plucked straight from the annals of sci-fi b-movies, and is perfect in the mix. If you weren’t already amused, the “Intermission” that follows where Kool Keith advises you to “go urinate, get a little bit of popcorn, stuff like that” or even “if you wanna jerk-off or two” will have you rolling on the floor. Ultramagnetic doesn’t sacrifice hardcore rap for comedy though – they infuse comedy INTO hardcore rap. That’s why even the almost new jack swing sound of songs like “Stop Jockin Me” and “I Like Your Style” still work. On the latter a smirkingly suave Keith quips “Hey girl, swing it over here with your long legs” and then proceeds to tell her “if I had a chance, I may swallow you, chew you like Doublemint.” Only Kool Keith could pull off such an over-the-top line and actually make it sound like a come on!

There’s no question that for any of fans of Ultramagnetic M.C.’s from their early days, or Kool Keith from the lunacy of his solo albums such as “Black Elvis” and “Dr. Dooom”, that this album is a seminal release. There are too many great songs to pass up, among them “Message From the Boss”, “Bust the Facts”, and the scathing up-tempo shot caller “You Ain’t Real.” By closing the album with the nearly six minute long “Chorus Line Pt. 2” Ultramagnetic acknowledges their own hip-hop legacy and seeks to extend it and preserve it for the future. Sadly the only really weak song on the whole album IS the original unremixed “Poppa Large” and looking back it was probably the dud that sank this ship. This album deserved the four mics it got in The Source though, and probably one more to boot. Speaking of boot, it may be the only way you can acquire this long out of print album – but even if you’re not a Kool Keith fan it’s worth the effort. This is a lost New York classic which deserves a second life beyond it’s unfortunately flaccid debut.