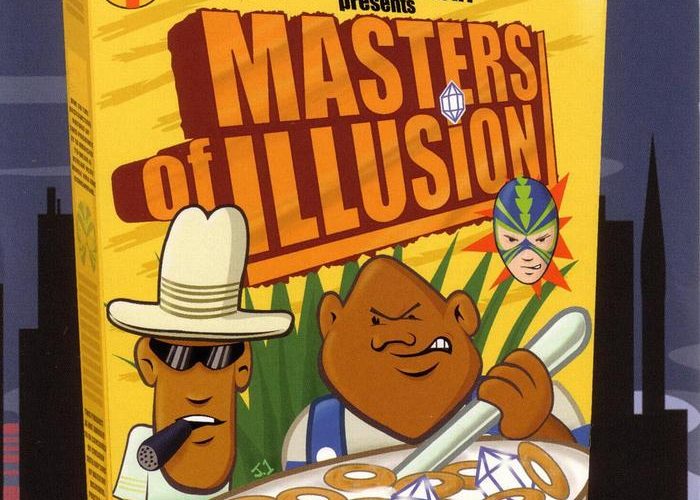 My introduction to this album was rather ironic. As a Kool Keith fan I’m always on the lookout for any album he appears on, be it well known or obscure. So far the only one I haven’t been tempted to pick up is the so-called “Personal Album” – the $50 price tag is kinda high and my man Laze said it really wasn’t that good anyway. Nevertheless I felt like a grade A moron when I looked through my collection of Kool Keith solo and group projects and couldn’t find a copy of Masters of Illusion, which at least to me was a far from obscure release. In fact songs like “We All Over” and “Souped Up” were highly popular in the underground, and any time Kool Keith is paired with the self-described “Funky Redneck” KutMasta Kurt good things tend to happen. One has only to look at the work he did on “Dr. Dooom and “Diesel Truckers” as proof. Kurt is a hellafied wizard on the boards to begin with, and for whatever reason he always seems to bring out the best in Keith as a result. To not own this album in my collection was quite frankly downright embarassing.

I went looking all over the internet for a copy, but every online retailer who had a listing for it was either out of stock or marked it down as out of print. REDEMPTION – I found a seller on eBay with a copy and quickly forked over the bread to get it. When the album arrived I realized I had made another colossal mistake – this wasn’t the lyrical “Masters of Illusion” album but rather the ALL INSTRUMENTALversion. Dissapointed I popped the album in and hit play – and I wasn’t dissapointed any more. The title track’s slightly off center and creepy funk with riffs seemingly chosen in homage to Jeru the Damaja’s “D. Original” was an instant favorite. Followed by the pounding bass and oriental strummed melody of “We All Over,” I was instantly reminded why I so craved to get the album after hearing this single so long ago. Stripping KutMasta of his co-horts Kool Keith and Motion Man actually gave me a uniquely fresh perspective on just how ill this album could be. The xylophonic sounds of “Magnum Be I,” stripped down pianoes of “Scared Straight,” Redman-esque notty headed funk of “East West Hustlers” and old school throwback of “The Bay-Bronx Bridge” were just the rememdy I needed for a hip-hop malaise I had been stuck in far too long. That instrumental album got some SERIOUS replay.

After having enough of KutMasta Kurt on his own, I redoubled my search and finally found myself an original copy of “KutMasta Kurt Presents Masters of Illusion,” lyrics and all. Not surprisingly the album did not dissapoint me in the least. Picking Motion Man as partner to Kool Keith was somebody’s inspired choice – whether Kurt or Keith, it matters not. Motion’s hyper-scientifical delivery perfectly combined with Keith’s grounded New York concrete verbals mixed with that unique brand of insanity only Keith can add to hip-hop. I honestly got chills down my spine when I finally heard the full version of “Partnas Confused.” The beat and scratching by Kurt were already dope, no question about that, but the lyrical nightmare Keith and Motion added to it was really something else:

Keith: “Rappers are weak they bullshit, talkin shit
They cadence is slow, them young kids are not equipped
Them handicapped raps get smacked back, in the wheelchair
Tuck in your anus piece, we catch crews with rectum grease
Hold down your fort, I’m veteran like Michael on the court
Baldhead swift slick make your wife wanna suck my dick
Rappers you know me, that keep it real shit is phony
No matter how much you smoke that weed, fuck with dust
I’m in yo’ central, you drive fakin in the rental
Frontin yo’ back out, I leave you with yo’ wack ass out
Rhymin in Lees, with boots on and Dungarees”

Motion: “I gives advice, President’s psychiatric worker
Clerical nurse, I bet your mother’s husband rocks a purse
Niggaz confused, cause I got styles to choose
My style is to switches, to switch from bus stop to Rolls Royce
to mack to you bitches, switch from Rolls Royce to baseball bat
to smack up you snitches, switch from baseball bat to triple
{*censored*} niggaz, white sheet, blood spot, backhandin yo’ momma
That bitch was late on the payment, I got no time for the drama
Nigga take care of home
Grown man’s my style, my delivery serve
Small medium large to extra large to XXL”

“Masters of Illusion” turns out to be everything you would think it would be knowing any one of the three artists involved, and then three times more. From the ridiculously fat BOOM BAP of “Urban Legends” to the braggadocious attack of Keith on “U Want Freestyle?” to cutting overhyped rappers down to size on “Souped Up,” there’s something worthwhile and quite honestly just a little bit weird on every single song. Unquestionably 60 minutes of the most musically and lyrically entertaining madness ever produced, “Masters of Illusion” is both the title and the description of this album. Kool Keith, Motion Man and KutMasta Kurt pull the sheet of their irregular reality over your eyes, and make you ears drop acid tabs until you see it just the way they do. It’s one trip you can’t afford to miss – don’t make the same mistake I did.