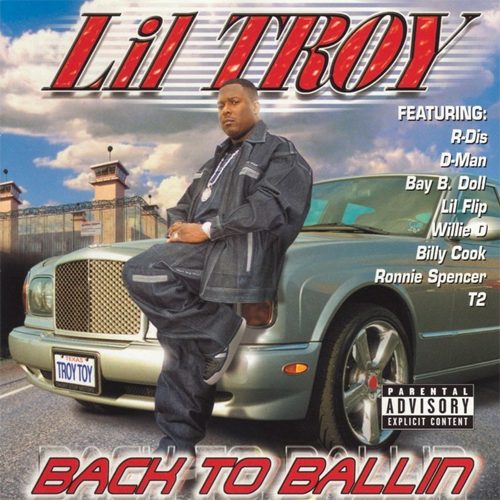 Lil Troy :: Back to Ballin

Even if you’ve never heard of this baller, it would not be an understatement to say he’s a legend down South. Some people have great talent, and some people know how to find great talent. Lil Troy could be thought of as a “scouting agent” for the major leagues of rap, and his greatest discovery to date was Brad Jordan, b.k.a. Scarface. Troy parlayed his scouting talent into his own label, Short Stop Records, and in 1999 released the successful “Sittin’ Fat Down South” compilation. The lineup was like a who’s who of Southern rap: Fat Pat, H.A.W.K., Willie D, Yungstar, Scarface, and the national debut of up and coming rapper R. Dis (Ardis).

Lil Troy’s success didn’t come without a cost though – he even ended up doing a bid while his album blew up and the song “Wanna Be a Baller” became a car thumping anthem coast to coast. Now that he’s back on the skreet, it’s only right that a new compilation of thumping songs should put his name back on the map. The album “Back to Ballin” picks up right where “Wanna Be a Baller” left off with the hopping lead single “We Gon’ Lean” featuring underground “Freestyle King” Lil’ Flip and the aforementioned R. Dis. With a memorable hook and a built in dance move, this song is bound to do for leaning what Ludacris’ “Southern Hospitality” did for throwing elbows.

While “We Gon’ Lean” will catch the crossover audience, there’s actually a lot hotter material on here, including the BeeGee’s sampling “Back to Ballin” title track. The hilarious “Lesbian Nights” reinterprets Kool & the Gang with a whole new twist, and the ultra pimped out “Let’s Smoke” will put you in the mood to slow dance with a blunt in one hand and a bottle of Mad Dog 20/20 in the other. R. Dis features prominently throughout the album, but a new Southern rap sensation comes up from the underground – the DJ Screw freestyle master known as D-Man. He has his own album coming out soon on Short Stop Records, but in the meantime check for him on bouncing songs like “Wired Up” and the uptempo krunk club song “Touch Ya Toes” with a tightly flowed rap by Baby-B-Doll.

Now to be sho’, if you hadn’t already guessed the lyrical material contained within is not going to spark the revolution. This album is all about “ballers and twenty inch crawlers” and is basically designed for cruising in your vehicle or amping up a dance party. That’s not to say the lyrics are entirely forgettable – but like a lot of good Miami bass songs they play a secondary role. The only time you’ll notice an occasional weakness is on a lukewarm song like “Buckle” with a mediocre Swift beat and too much reliance on repeating the catch phrase “buckllllllleeee” ad nauseum. You can overlook the weak tracks though if you just want some good bumps. For the riders Troy threw in two extra tracks – a funked out “We Gon’ Lean” remix and a slowed “Chop & Screw” remix of the hit song “Wanna Be a Baller.” The best thing Troy could do on his return is stick to the formula that already worked last time out, and he succeeds at that perfectly.