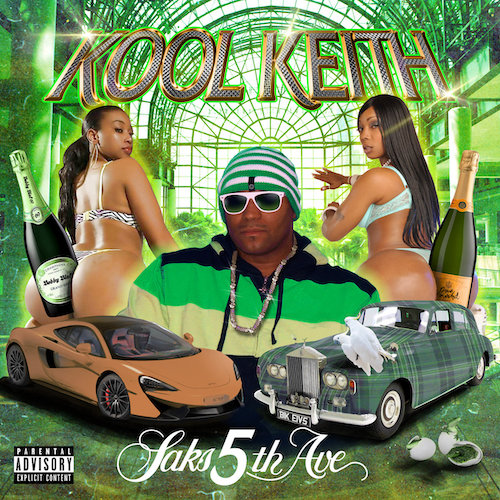 Okay, look. I think we can all understand that Kool Keith is parodying conspicuous consumption on “Saks 5th Ave.” The album’s title is itself a reference to a very expensive store on what has been accurately called “the most expensive shopping street in the world.” If you couldn’t get the point from the title or the content of the songs (in one he brags that he used to live in the Twin Towers all by himself), the cover artwork has every trope of rapper wealth — champagne bottles, bikini string beauties with big booties, and cars most of us will never drive in our lifetime. It’s one giant send up of what it means for rappers to floss, and Keith Thornton is more than happy to play the antagonist here, rubbing his cash all in your face.

The question here is not whether or not Kool Keith’s point makes sense. In fact by his own often abstract and esoteric standards, having a concept and theme for an album like “Saks 5th Ave” is very welcome. The real thing you want to know is the same thing I wanted to know — is it any good? At times, yes. All of the tracks are credited to Dean “Landon Price Beats” Trotter and he seems to have a good handle on creating Keith’s soundscapes. “Marc Jacobs” has some stank bass and I like how he purposefully reverses the instrumental at regular intervals. “Christian Dior” would be out of place in a contemporary playlist on a FM radio station were it not for Keith’s bars. I’m pretty sure lines like “Entertain me while I drink rum/your female engineer drink cum” would get the song banned from most public airwaves.

At times though both Trotter and Thornton lose the plot. Take “Givenchy” for example — a song that tries to imitate the dark soundscapes of grime and drill, but have neither the flow of the UK or Chicago to go along with it. Keith babbles stream of consciousness bars that have more to do with putting down aspiring rappers than showing off his own ability to floss. “Rappers with no talent trying to get labels to scoop ’em.” So what? At this point in the history of the music industry, getting signed to a label is actually counter-productive. You’re better off starting your own label and/or distributing the music yourself. Who’s really trying to get signed? Lack of talent hasn’t stopped anyone from getting on Soundcloud either.

Then there are times when Keith just seems to be name dropping just to hope he fires a few neurons across synapse gaps and make you go “oh yeah I get that” when he isn’t actually saying shit. Bob Marley, Rick Ross, Iman, Michael Jackson, Hells Angels, fine, whatever. He even explains the song’s title being a name drop in the hook: “Donna Karan, she’s a designer.” If you didn’t know, now you know. It doesn’t make up an actual song with a point either way though. It’s just a pile of ‘member berries for you to consume.

I’ll say this for “Saks 5th Ave” — it’s more interesting than the last Kool Keith album I reviewed. At times Keith’s purposeful absurdity makes me laugh. “You touch computers, you get spam/I beat the beat with pots and pans […] I urinate, I pee on cash.” I’m willing to bet he actual does. Keith is a weird enough dude that songs like “Angel” could be the literal truth, but given the air of mystery he wraps around himself we’ll never know. That’s exactly as it should be, because Kool Keith without an air of intrigue would just be a less talented Wesley Willis making it up as he goes over bland beats. This time at least the production carries him along and gives you the feeling there’s a point to the project, even if we all know the truth is this was just another day of Keith just fucking around for the fun of it and putting shit out to see who would buy it. In his very extensive catalogue this one lands somewhere around the middle as “tolerable” yet not “memorable.” It comes and goes without making a huge impression on you either way.