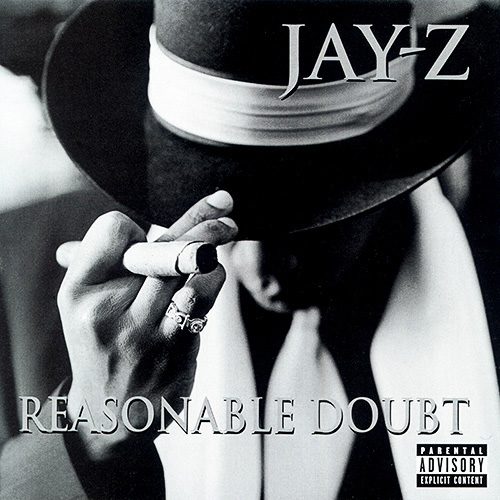 Hard as it is to believe now, there was a day and time in rap’s history when there was no H to the Izzo, no Jay-Hova, no Jigga Man, and even a time when there was no Jay-Z on radio. That most commercially recognizable of all rappers used to have less visibility than a Kia Sportage. You could actually respond with “Who?” when someone said his name out loud.

That’s not to say Jay-Z didn’t pay his dues and earn the right to be recognized, but like champagne good things only bubble up over time. Jigga paid dues for years as the protege of the rapper Jaz, to little acclaim. Cameos on hit Jaz songs like “Hawaiian Sophie” and “The Originators” though parlayed into bigger appearances on albums by New York favorites such as Big L and Mic Geronimo. Even so, by the time “Reasonable Doubt” dropped in 1996, many people would have mistaken it for a new jack rapper’s national debut instead of an industry veteran’s first full LP.

Either way, the chance to introduce himself to the public was certainly not wasted. Shawn had spent his time crafting his rhymes, and he paired a well prepared flow with the best beatmakers in rap: Ski, Clark Kent, and DJ Premier laced tracks so fat your ears would need Slim Fast. Even a nobody ironically named Knowbody put together an incredibly smooth opening track for Jay that became the mantra of his career: “Can’t Knock the Hustle.” With a bouncy beat and Mary J. Blige on the hook, the song was infinitely danceable, but the lyrics he spit were far from just the average shit:

“My pops knew exactly what he did when he made me
Tried to get a nut and he got a nut and what
Straight bananas; can a nigga, see me?
Got the US Open, advantage Jigga
Serve like Sampras, play fake a rappers like a campus
Le Tigre, son you’re too eager
You ain’t havin it? Good, me either
Let’s, get together and make this whole world believe us huh?
At my arraignment, screamin
all us blacks got is sports and entertainment, until we even
Thievin, as long as I’m breathin
Can’t knock the way a nigga eatin – fuck you even!”

There you have it – Shawn Carter, out to bust the rap world wide open. Displaying a wide versatility in his rap verse, Jay-Z simultaneously avoids simplistic rhyme schemes, shows a witty use of similies and metaphors, and even makes a political statement on how urban youths are forced to make the best of limited opportunities. Who indeed could knock his hustle? With this album though, good things only get better as you go. “Politics as Usual” makes the duality of Mr. Carter’s life clear when he raps, “Y’all feel a nigga’s struggle, y’all think a nigga love to hustle behind the wheel, tryin to escape my trouble.” Clearly, as much as he enjoys the fruits of his labors he feels success is itself a trap – an issue he addresses in even greater detail on the chilling Primo produced track “D’Evils”:

“This shit is wicked on these mean streets
None of my friends speak, we’re all tryin to win
But then again; maybe it’s for the best though
cause when they seein too much, you know they tryin to get you touched
Whoever said illegal was the easy way out
couldn’t understand the mechanics
and the workings of the underworld, granted
Nine to five is how to survive, I ain’t tryin to survive
I’m trying to live it to the limit and love it a lot
Life ills, poison my body – and used to say ‘fuck mic skills’
I never prayed to God, I prayed to Gotti
That’s right, it’s wicked, that’s life, I live it
Ain’t askin for forgiveness for my sins..”

Anytime someone questions Jay-Z’s value as a lyricist based on his commercial success, early songs like these confirm why Jay’s lofty perch atop rap is so richly earned. With this album there are so many highlights it’s hard to even pick out individual lyrics or songs to salute. Each listen will bring a new favorite to the forefront: one time it might be the smooth Isaac Hayes samples of “Can I Live”, another the richly lusterous orchestral Primo sounds of “Bring it On” with Big Jaz and Sauce Money, or even the true debut of Memphis Bleek over Eddie Henderson grooves on “Coming of Age.” The song that probably sent the biggest shockwaves through hip-hop was the pounding piano keys and chunky bass of “Brooklyn’s Finest” featuring the one and only Notorious B.I.G. This song should bring a tear to any hardcore rap fan’s eye, as the two sound so natural and beautifully brutal together on this Clark Kent beat it belongs in the hip-hop hall of fame as one of the twenty greatest rap songs EVER recorded:

“[Jay-Z]
For nine six, the only MC with a flu
Yeah I rhyme sick, I be what you’re tryin to do
Made a fortune off Peru, extradite, china white heron
Nigga please, like short sleeves I bear arms
Stay out my way from here on (CLEAR?) Gone!

[Notorious B.I.G.]
Me and Gutter had two spots
The two for five dollar hits, the blue tops
Gotta go, Coolio mean it’s gettin “Too Hot”
If Fay’ had twins, she’d probably have two-Pac’s
Get it? .. Tu-pac’s”

That’s the late great Biggie Smalls at his finest – so brash that he can even joke about his wife’s alleged affair with his biggest rival. The two seemed to bring out the best in each other, but more to the point, this stellar introduction to hip-hop brought out the best in Shawn Carter. Weaving together street politics, hustler rhymes, a mind that laced complex poetic structures together effortlessly and a smattering of the best song crafters in New York created an album that can truly be called cinematic. From the yin of the good life on “Feelin’ It” to the yang of a life of tragedy and mistakes on “Regrets” Jay-Z covers all of the bases and seems to score a run each time he comes to bat. In fact, if this album was a batting average, it would be an astronimcally high .866 – and even he admits it on “Dead Presidents II” with the line “catch me swingin for the fence, dead presidents, YA KNOW?!” It’s hard to imagine with the sweet Nas sample on the chorus of this track that the two would ever become such bitter rivals – c’est la vie.

One thing is for certain though – this is not only the definitive album from H to the Izzo’s catalogue, it’s one of the ten most important rap records of the entire 1990’s. It’s possible to live without having heard it – but after you do, you’ll wonder how you ever managed without it. Even nearly six years later, this album stands up to the best production and strongest lyricism coming out of any rap around the globe. If an album could be said to have made corny MC’s into Jay-Z haters, this is the one.