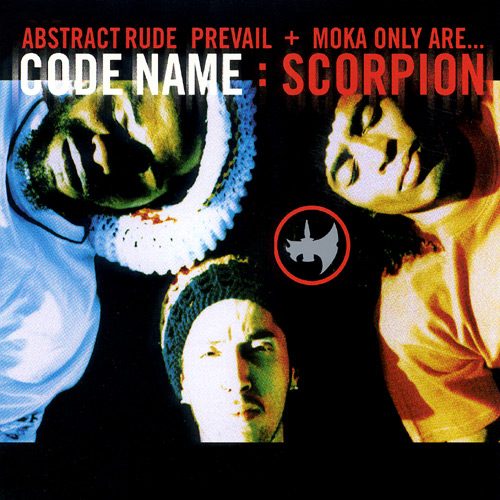 “Code Name: Scorpion” is as efficient as a hip-hop album can get; we’re talking about 13 tracks of hip-hop, with no BS skits, interludes, intros, or anything else that slows down the proceedings. Since skits are the rule of the day for most major-label artists in hip-hop, the purity here is refreshing and a sign that these cats take this project seriously, rather than just a vehicle for their own vanity. They’re already getting props and we haven’t even dived into the music yet.

Production here is handled primarily by Rob the Viking, Battle Axe’s main man behind the boards. His work excels, and fits in well with the vibe set up by the MC’s involved. Things are quite different, however when Moka Only and PaulNice take over production on four tracks, as their work is a bit incongruous within the moody soundscape set up by Rob the Viking. Not that their tracks are bad, mind you, just inconsistent with the rest of the album. But regardless of the producer, the production is uniformly excellent.

This album hits its peak on songs featuring Ab, Prev, and Moka together with the Viking on production. Tracks like “Smokin’ in Here”, “And That You Can Quote”, “She’s Always Right” and “Jampacked” are great cuts from any angle. The three MC’s play off each other well and their personal styles shine brightly when the listener is able to compare the three within the context of a single song. There are a couple of solo joints as well, the best being Ab Rude’s “Stop Biting,” a blazing track with Ab ditching his usual laid-back style for a more aggressive one as he lays into chump MC’s who bite his style. And believe me, he doesn’t hold back. Consider this:

“I’m either very smart, or incredibly stupid, ahead of my time
I’m locked in a room with a view of the wall
Iron-clad, my rhyme is a firing squad
Watching them fall and grabbing my bowling balls
Holding them all accountable with a mountain of evidence
You’re under the table, dead presidents
Wouldn’t let you walk from the case on a hung jury
A lifetime banned from the mic if you come near me
The outright, end-all, audacity and gall, if you feel certain
You’ll never get past this steel curtain”

This album is a winner and worth the bones of any hip-hop fan. On top of being a solid bit of work in its own right, it’s also a good introduction to the principles involved and their outside work. Moka Only has a huge library of solo material, while fans of Prevail may want to check his work with Swollen Members. As for Ab Rude, the man is nearly a legend due to his association with Aceyalone and the Freestyle Fellowship. With this album as a starting point, there is a huge selection of quality hip-hop out there to be found. Check it out!