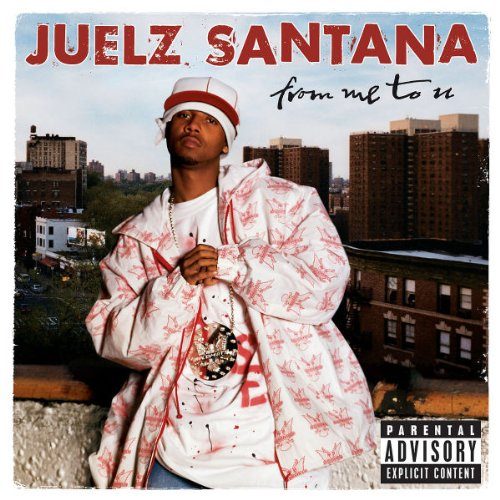 Juelz Santana :: From Me to U

Sans Cam’Ron himself, Juelz Santana is probably the most recognizable member of The Diplomats. On the strength of the words “listen to my homeboy Santana” off Cam’s smash hit “Oh Boy,” you’d know him by his verse that follows – “I’m in trouble need bail money, shit” et cetera et cetera. He and some of Cam’s other homies eventually formed The Diplomats and released their debut album “Diplomatic Immunity.”

I have to break the reviewer’s code at this point and get personal with y’all. I was NOT looking forward to writing this review. After covering The Diplomats album for RapReviews, I received some of the most vitriolic and foul e-mail it’s ever been my displeasure to get in over a decade on the internet. “Suck a dick faggot” would probably be as close to PG-13 as any of them got – most were far worse. To this writer’s surprise The Diplomats had a large and loyal fanbase, and nearly every one of them with a computer had something to say, written mostly in four letter words. I can only assume that if I say anything bad about their boy Juelz, I’ll hear it again. None of the other writers though jumped up and said, “Flash I’m DYING to review that Juelz Santana – I’ll do it for you.”

After a pointless 144 second long intro, the album gets properly started with the song “One Day I Smile.” Although it’s not a Kanye West or RZA track (many e-mails reminded the latter was truly the one to innovate this style) Heatmakerz still mines a sample of “Mr. Heartbreak” by The Delegation to give it that sped-up soul glow. I honestly have nothing negative to say about it. He starts out with a tribute to artists who are gone (dead or in jail) and then it becomes a personal narrative of how he rose from the streets:

“Follow me down this yellow brick road
187, hello, every ghetto zip code
I had to change my pace up, so I went left
While everybody went right, had to switch the race up
Now I’m better off, met Cam set it off
Did the mix tape now look DipSet is off
Put the bid in, Def Jam bet it all
First right of refusal, Dame wouldn’t let us off
So we matched it, we signed labels with Dash’s
Cam goes platinum, the Set is up next
What? A double al-blum, we set for the best
Juelz is the test, which is me, fail or succeed
Yeah, but still I’m here in the flesh, handin you breath
Mixed with a lot of thought, The Santana, Robb Report”

It’s not hard to tell Santana is Cam’s protege. Both have that same laconic rap flow that features long pauses between words and a vocal tone that says “I’m just talking to you conversationally, although occasionally I might rhyme in the process.” The most noticeable difference between the two is the timber of their voice – Cam’s being lower and Santana being a couple notches up, but certainly nowhere close to a DJ Quik or Eazy-E octave. He does get a little higher up and more amped up on “Okay Okay” though. It’s another Heatmakerz track and this one samples The Delfonics, just music this time (no speedy singing). The presentation on the whole is eeriely reminiscent of Freeway, no surprise given both are signed to The Roc. Santana’s pop culture references in verse two are worth a chuckle or two:

“It’s Santana the great again
Tie him up, bandana his face again
I tried to tell ’em it’s no escapin the basics
And no escaping the hatred and
no escapin The Matrix man
Only Neo is me, no Cleo can see – my future
If she did I’d shoot her”

After another unnecessary skit about a rapper getting head (at least she pukes on him), the song “Down” follows. This song milks the “Oh Boy” formula to the n^th degree, with each line of the rap ending with a sample of Mary J. Blige singing “going dowwwn” with that speed-up style courtesy Heatmakerz. This one is skippable. It’s followed by the oddly infectious “Monster Music” which features additional vocals by Opera Steve – and yes he IS pulling an Adam Sandler here, except with the words “DipSet let’s get it on.” Even the sound of someone screaming in the background every now and then is a nice touch, so props due to Heatmakerz on this one. Afterwards is “Back Again” which features a Commodores sample of “You’re Special.” The Roc obviously has a huge bankroll, because not since Gilbert O’Sullivan has any label been able to afford putting so much classic soul from big name R&B artists on their album. Tempted though I might be to say it’s tiresome, the music wins over the writer on this one – or maybe it’s just Santana’s first verse:

“Now I’m (back again) just like Flash was
Bad like Shaft was, react like Cassius (whoa)
Clay did up in the ring with his back up
Against the ropes, jab jab, back up
It’s all for what? All for us, all for bucks
You chumps remind me of Mr. Softee trucks
Icee niggaz, banana boat milkshake ice cream niggaz
I don’t like these niggaz – nope!”

Removed from his DipSet Taliban brethren, Santana is not only more pleasant to listen to but shows cleverness and wit in his choice of phrasing and punchlines. No bullshit. Heatmakerz also seems to be cashing in on that Roc connection for choice music. “My Problem” lifts from “Jealousy” by Vickie Sue Robinson, “How I Feel” speeds up “Woman to Woman” by Shirley Brown, and the oddest/dopest one of all may be “Why” as it culls the USHER song “Can U Help Me.” Santana gets his shine on with this one and definitively proves why he deserved solo time in the spotlight:

“Aiyyo my name mean a lot to me, pain mean a lot to me
Fame means nothin but the game means a lot to me (yeah)
.. I slang ‘caine on these blocks for weeks
Ever since Rocky III, and the death of Apollo Creed
.. I was a tiny little poppy seed
As grimey as I can be, as sheiesty as I can be
Niggaz live nicely don’t understand the life of me
Other niggaz don’t like me and they wanna take my life from me
They don’t understand I love it and I like the beef
The war, the guns, the violence, it’s all right with me
I be layin in the cut where the sniper be
Righteously, waitin for you to get out the driver’s seat
(DAMN) Damn – it’s crazy man
I don’t think like usual people, who think like usual people”

Word is bond. Unfortunately the second half of the album starts to steal Santana’s shine as the DipSet worm their way back into the mix. “Wherever I Go” features Jimmy Jones, “DipSet (Santana’s Town)” features Cam’Ron, and “Squalie” features some cat I don’t even know named JR Writer. And on the latter cut, the sampling rate finally hits overload by borrowing from Love Unlimited Orchestra’s “I Love You So, Never Gonna Let You Go.” To rub salt in the wound, it also sounds like “Oh Boy” part three, all though at least it breaks down “squalie” for the know nots as being the cops on your block.

The album winds down with the overly sappy “Rain Drops,” the “My Love (Remix)” featuring Jimmy Jones, and “Let’s Go” with a Cam’Ron guest appearance and a Marvin Gaye sample that may get your dander up as much as it did mine (it has none of the class of Erick Sermon’s “Music” whatsoever). The guest appearance of T.I. on “Now What” over a Jazze Pha produced track helps save the album from devolving into a lesser lifeform, although by “This is For My Homies” featuring Jimmy Jones and samples of the D.R.S. hit “Gangsta Lean” you’ll be ready for some electronic beats by The Neptunes or some dark ominous chords from the Alchemist. It’s not quite as overdone as “Diplomatic Immunity” was, but after 70 minutes of an album it’s just too much. The end result is that this CD is split into lesser and greater halves, and coincidentally or otherwise the greater half is Juelz Santana, by himself. He has the makings of a future rap star, but if “My Problem (Jealousy)” teaches Santana anything it may be that it’s his own homies in the DipSet who can, will, and do hold him back from shining brighter.

Juelz Santana :: From Me to U
6Overall Score
Music6
Lyrics6