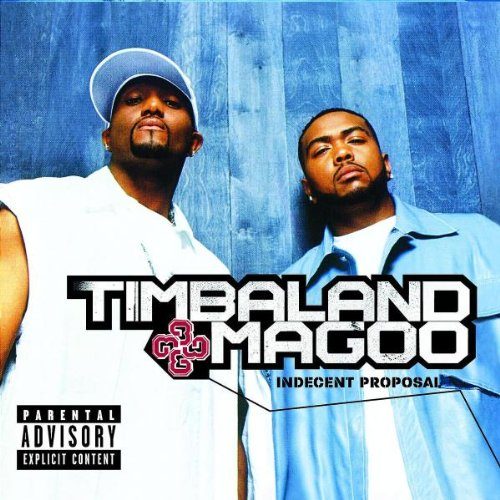 The positive – an entire album produced by Timbaland. The uber-producer of the 20th and the 21st century, Timbaland has been the architect behind more hip-hop and R&B hits than can possibly be counted on all your fingers and toes. Even the songs he produced which aren’t hits have achieved a unique cult fandom in music, due to the fact he’s never afraid to do the strange or bizarre in order to create a new sound. Timbaland’s sonic landscape includes, but is not limited to, belly-dancing, disco funk, science fiction and good ol’ fashionedSOUL.

The negative – an entire album featuring Magoo. Few rappers have been the butt of as many jokes as this unfortunate MC whose voice is undeniably a dead-ringer for Q-Tip from A Tribe Called Quest. Loudly and often many of Timbaland’s fans AND critics have questioned why a rapper who is more likely to be a clone than Dolly the Sheep has been so prominently featured on Timbaland’s tracks. In many circles a strong opinion exists that Timbaland and Magoo’s album “Welcome to Our World” would have been a perfect album.. MINUS Magoo.

Although the dichotomy seems clear when analyzed in the abstract, the truth of both realities is somewhat more fuzzy. Timbaland is not God, and is therefore as fallible as any mortal when it comes to making duds. Although this album starts out strongly, it really bogs down in the middle with too many straight songs featuring Petey Pablo. The logic of this decision escapes me – it hurts both a good rapper and an excellent producer by presenting too much of the same in repeated doses. A break comes with the ironically titled “Roll Out”, which slows things down while Missy’s protege Tweet gets a chance to croon. (If the irony escaped you it’s that the lead single from Ludacris’ “Word of Mouf” has the same title, and was also produced by Timbaland.)

Magoo on the other hand is not nearly as wack as previously estimated. His basic steelo has not drastically changed, but his flow and the caliber of his lyrics seems much improved. On songs like “It’s Your Night” and “Considerate Brotha” featuring Ludacris he sounds pleasantly pimpish – slowing down his delivery and in doing so presents a much richer vocal tone. On songs like “All Y’all” the more familiar Magoo flow is in effect, but paired with alternating verses by Tweet his dreams of rags to riches sound sweet over Timbaland’s hypnotic beat. Give him the most credit for his rap on “Party People” though – a song where he could easily have been embarassed by contemporaries Jay-Z and Twista but which instead shows him holding it down nicely:

“Hittin ’em high, right in the ear
Slicin on ’em muh’fucker vampire style, I’m a bloodsucker
You turnin into a mad ducker, tellin ya dog
I’m at the Rucker with a bad Puerto Rican chick
Fat as my cash and she a dick sucker, get up outcha car
You ain’t goin real far, see the chainsaw?
Breakin the law, like turnin a dyke
when it come to that man that just like Mike
I don’t care what you like, I’ll make you run in outer space
If you go to court man, only wish you got a case
For real, I’m fuckin faced on a hill of ice
Mag hot now nigga 50 G’s the price”

The most surprising thing about this album may be Timbaland himself – who has moved up from being a generic rapping producer to having an engaging and distinctive flow and personality. Ultimately this album encompasses such a wide variety of sounds it’s hard to encapsulate it in a few short sentences – everything from the laid back wind instrumental to the sorrows of fame on “People Like Myself” to the supercharged yet strangely minimalistic club anthem “Drop” featuring Fatman Scoop. By being completely unpredictable from one track to the next yet featuring at least a dozen songs which could be hit singles on their own (sadly the only one which might flop is the over-pretentious “I Am Music” featuring Aaliyah) Timbaland and his partner-in-rhyme Magoo score a big success. Even if Timbaland and Magoo weren’t your two favorite rappers you can’t deny the collaborative effort of this album for one reason: it, and they, are FUN to listen to.