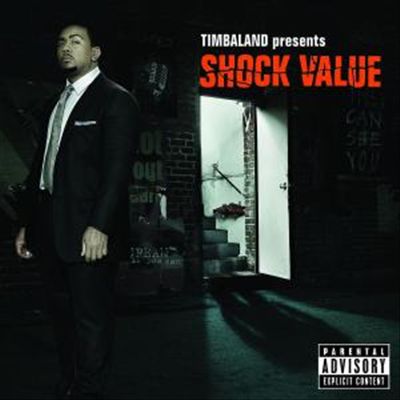 Crossover hits are a pit and a pendulum representing peril for hip-hop producers. When you’re on top the blade is held at bay and not allowed to sway and everybody will say that your records are a careful balance of pop sensibility and underground swagger. The top is a rather precarious perch though – slip off and the pendulum is released. “YA BEST PROTECT YA NECK!” Suddenly it was all a mistake, you were just a fad, the flavor of the minute. Your records are dismissed as meaningless fluff and fickle musicians looking for their next big hit flock to the new man at the pinnacle; all along looking over their shoulder and hoping they didn’t jump ship too early or make a huge career mistake. If you think the music business is all glamour, fortune and fame put yourself in Timbaland’s shoes and try to imagine the amount of pressure placed on his shoulders. Despite a litany of chart-topping hits many struggling producers would kill for an a reputation for breaking in experimental new musical styles and taking them mainstream, it’s always a “what have you done for me lately” world where your reputation rests on your next big hit, the blade swinging perilously closer to career death the longer you go between one and the next. Under the circumstances you could hardly blame Timbaland for pulling out all the stops on the first single for “Shock Value,” his first new solo album in over four years. “Give it to Me” pulls together Justin Timberlake, Nelly Furtado and Timothy Z. Mosley himself to form a triumverate of hip-pop perfection:

Furtado: “I’m the type of girl to look you dead in the eye-eye
I realize when it come to it you don’t realize why I’m fly-y-y
Seen you tryna switch it up but girl you ain’t that dope
I’m a Wonder Woman, let me go get my rope
I’m a supermodel and mami, see mami
Amnesty International got bankdrupt, I’m on top, on lock
Love my ass, love my abs in the video of ‘Promiscous’
My style is ri-dic-dic-diculous, ‘diculous, ‘diculous”

Timbaland: “When Timbo is in the party, everybody put up they hands
I get a half a mil’ for my beats, you get a couple gra-an-and
Never gon’ see the day that I ain’t got the upper hand
I’m respected from Californ-I-A, all the way down to Japan
I’m a real producer and you just a piano man
Your songs don’t top the charts, I heard ’em, I’m not a fa-an-an
Niggas talkin’ greasy, I’m the one that gave them they chance
Somebody need to tell them that they can’t do it like I can”

The hand grabs the rope, and the blade is held at bay for yet another day. That’s not terribly surprising though – despite the odds against any one man being able to come through in the clutch so many times, Timbaland has scored so many hits that betting against him would be like picking Chuck Liddell to get knocked out in the first round of a fight. Sure it might happen someday, some colossal Buster Douglas level upset that none of us see coming, but until that time you’re putting money on a proven winner who seems unstoppable. Far from jumping off the Timbaland bandwagon and looking for the next big thing, more people than ever are jumping ON for the ride on “Shock Value.” Even for Timbaland’s clout, some of these combinations are not ones you would have imagined in your wildest dreams. Elton John bangs out the ivories while Timbalanddoes the crooning and vocalizing on “2 Man Show” and it WORKS. If that’s not enough G-G-G-G-Unit members 50 Cent and Tony Yayo thug it out on “Come and Get Me” and Timbaland ends up sounding like their long lost Virginia member of the clique:

“Nigga your time is up, I ain’t come to kid you
I knew you niggaz was dumb, but how dumb is you?
Thankin you can see the king when you unofficial
You don’t wanna go to war cause I launch these missiles
I’m a ride or die nigga, I be tearin shit up
We ain’t like them other losers don’t compare ’em to us
All the hoes love a nigga they be backin it up
But me, I love money I be stackin it up”

Even on the off chance Curtis Jackson was the ghostwriter for Tim’s verse, Timbaland delivers it with such swagger and conviction you can’t help but throw it up to the self-proclaimed king. “Shock Value” lives up to its name because the surprises keep on coming. Keri Hilson and Nicole Scherzinger turn in one of the dirtiest and most erotic performances of all time on “Scream,” a song which is so funky and seductive any music video NOT featuring lewd sexual acts would be a huge dissapointment. Timberlake sounds equally pent up on the stomping up-tempo “Release,” an unofficial sequel to “Sexy Back” which is far more entertaining musically than its predecessor. The tracks feature names both familiar and foreign: Dr. Dre and Missy Elliott are both on the bass-laden technological triumph “Bounce” and popular MTV rockers Fall Out Boy jump in the mix for “One and Only,” but on the opposite end of the spectrum Amar and Jim Beanz get a piece of the action on the slinky Indian sounding and appropriately named “Bombay” and don’t sound at all out of place hanging with Timbaland. What may be the most shocking about “Shock Value” is how Timbaland continually manages to stay one step ahead of the competition. To be perfectly honest though you can’t really grade Timbaland on his rap here, as he’s perfectly competent when he does bless the mic but largely lives up to the “Timbaland Presents” half of the title by providing the beats and letting people like Sebastian, The Hives and even Magoo handle the performances. “Shock Value” shows that Timbaland’s greatest value is playing the Blackground, letting other stars shine on his beats – and shine they do.