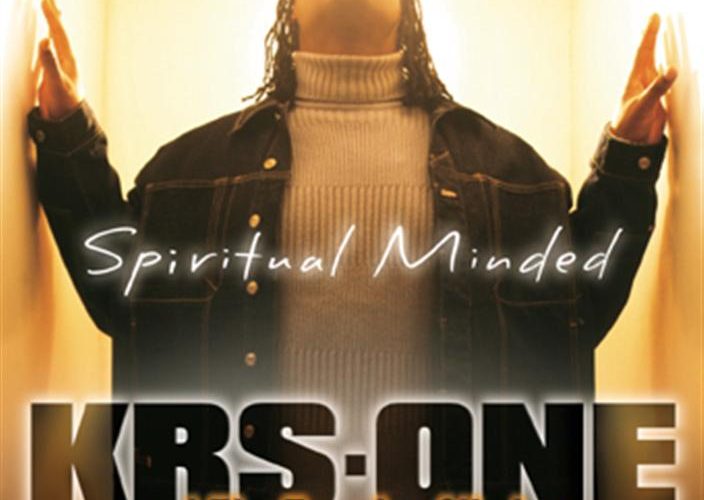 People talk a lot in hip-hop music and culture. By talk, I mean “gossip.” Rumor mills churn overtime coming up with things that are sometimes true, sometimes fictitious, and more often than not a confusing mix of the two. Therefore, it was not hard to believe KRS-One was working on a new album when word came down the grapevine online… but a GOSPEL RAP ALBUM? Even if that made sense, the title “Spiritual Minded” seemed an obvious parody of his classic “Criminal Minded” record from the 1980’s. Surely someone was pulling a fast one on gullible rap fans!

Believe it or not, it’s all true. This is not a radical departure from the KRS-One you already know and love though; rather, it’s more of an evolutionary step forward from an MC who is already well known as a scholar, philosopher, and metaphysician. While KRS may have gotten a foot in the door of hip-hop with hardcore gangsta bravado, that raw energy was channeled into movements like Stop the Violence and Human Education Against Lies (H.E.A.L.) after the unfortunate and violent death of his partner Scott LaRock. Looking back over his catalogue of the last two decades, most if not almost all of the violence found in his songs was directed at hypocrisy, racism, and feeble MC’s not capable of holding his jockstrap. Through the lens of “Spiritual Minded” this philosophy is brought into focus; as KRS wields his microphone like the sword of the righteous to bash down wickedness and lead those in darkness to the light – the light of the Lord.

Last time around on “The Sneak Attack” many KRS-One fans were dismayed by the fact that only a censored version of the album was released. This time around there’s no need to worry that there’s an alternate version of the album though – KRS doesn’t present any words that needed to be bleeped out for sale at Wal*Mart in the first place. The bold few who will dare to call this a sellout move obviously don’t get the fact that it’s hard to be “Spiritual Minded” when rapping about bitches and sluts. If you’re confused about this, Kris breaks it down nicely for both old fans and new heads on “The Struggle Continues”:

“I know what y’all thinkin, KRS-One
doin gospel rap?? Say word son!
Word sonny, we don’t spit verbs for money
Some of these churchs be absurd and funny, uhh
Everything I said in the past I still spit that
Songs like ‘The Truth’, ‘Higher Level’ and ‘Why is That?’
I give back quick facts; but when I say God created Hip-Hop
many churches won’t admit that..”

There you have it – rap music is one of God’s creations, just like all forms of music, and there’s no reason God can’t speak through rap music. Unlike a lot of so-called “gospel rap” to date though, there are no corny concepts like “gospel gangsters” or “drivebys for Jesus” that attempt to merge hardcore credentials with love of The Word. A few Christian MC’s have broken the mold and made spiritual albums with great beats and rhymes, but none are as respected or well-known as KRS-One. Without dismissing their work before him, it’s fair to say that KRS injects a whole new level of credibility into gospel rap with this album it didn’t have before.

A lot of things which were missing on “The Sneak Attack” have crystalized and emerged in the creation of the more spiritually focused KRS-One. In fact, the beats and flows on this album are the most consistant on a KRS album since 1997’s “I Got Next.” The self-produced songs are among the best he’s ever done, including the surprisingly raucous boom bash beat of “Lord Live Within My Heart”, the updated classic “South Bronx 2002” and his rebuke of people who fail to understand the challenges of being a POSITIVEforce in a negative world on “The Conscious Rapper.” If ever KRS has issued a response to his detractors on wax, this is surely one of the strongest:

“To be a conscious rapper ain’t a mystery
You gotta laugh when they call you contradictory
The whole industry, you gotta push and pull it
To really get with me, you gotta dodge they bullets
BLAOW, BLAOW, BLAOW – every day and every way
You critics got somethin to say
At the same time, you’ve got to uphold Christ
Uphold life, while others flash cars and ice”

If you had misinterpreted the term “gospel rap” as an invitation to a didactic and preachy lecture on Christianity, this album dispels the myth. With personal and touching songs like “Good Bye” and “Tears” (the latter dedicated to September 11th), straight up lyrical attack bravado like “Ain’t Ready” and “Never Give Up” and food for thought like “Know Thy Self” and “Take Your Tyme”, this album is everything a KRS-One classic would be in any day and age – minus the profanity and plus a few more references to Christ. If like me you heard the concept and title and thought KRS-One had completely lost his mind, here’s a reality check: between the patriotic Hammer and the religious KRS-One, I’ll take the rapper who preaches over the preacher who raps ANY DAY.