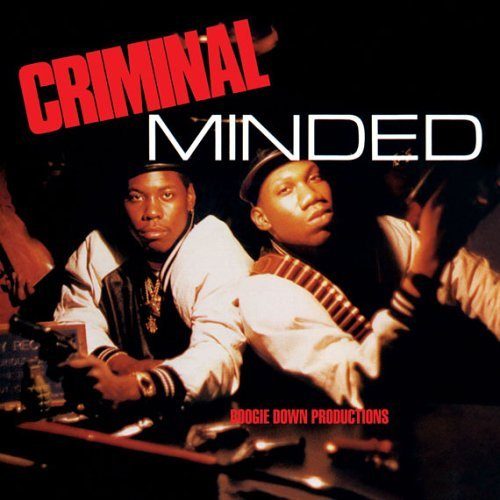 20 years after rocking the hip-hop world and scaring Reaganites with its picture of KRS-One and Scott LaRock posing with a mountain of artillery on their album cover, “Criminal Minded” may STILL be one of the most misunderstood and underappreciated records in the history of recorded music. The existance of the record can in some respects be considered a minor miracle as KRS-One and his Boogie Down Productions cohorts were relative neophytes to the music industry in 1987. B-Boy Records is exactly the kind of fly-by-night record label you WOULDN’T want to sign with to put out a national debut, but hindsight is always 20/20 and BDP probably didn’t have that much choice given that rap music was hardly mainstream in American culture. While Run-D.M.C. and Fresh Prince had met with some crossover success at this point, they were only the tip of a Titanic-sized iceberg that stretched all the way from New York to California. Putting out this record with this cover and getting it into any stores outside their native Bronx, New York stomping ground was going to be an epic struggle even if they weren’t signed to one of the shadiest labels in hip-hop’s history. To make matters worse Scott LaRock was murdered less than six months after “Criminal Minded” was released, an event that not only scarred KRS and the BDP crew to the bone but made many nervous retailers think twice about selling a “gangster rap” record like BDP’s in their stores.

Anyone judging the book of Boogie Down Productions solely by the cover and title of “Criminal Minded” completely missed the point. In fact I’m going to openly dispute the fact that music historians have referred to this as a seminal gangster rap record. If you want to find the origins of the gangster rap movement, you’d be much better served by listening to the early records of Schoolly D and Ice-T. “Criminal Minded” undoubtedly exists within the same world of violence and poverty that KRS-One & Scott LaRock grew up in, but theirs is not an album devoted solely to that bleak urban life. In fact songs like “9mm Goes Bang” are the EXCEPTION on this album, not the rule. That’s not to imply “9mm” is not a hip-hop classic in its own right, nor that it couldn’t be claimed as an ideal narrative example of the gangster rap genre, but the song is a classice precisely due to the cinematic scope of the story it tells. In this reggae-influenced tale of a drug deal gone bad, KRS portrays a man forced to protect his own life by any means necessary:

“Puffin sensemilla I heard KNOCK, KNOCK, KNOCK
But the way that they knocked it did not sound like any cop
And if it were a customer they’d ask me for a nick
So suddenly I realized it had to be a trick
I dropped down to the floor and they did not waste no time
They shot right through the door so I had to go for mine
They pumped and shot again but the suckas kept on missin
Cause I was on the floor by now, I crawled into the kitchen
Thirty seconds later, boy, they bust the door down
The money and the sensemi’ was lyin all around
But just as they put their pistols down to take a cut
Me jumped out the kitchen went BUCK BUCK BUCK!

While there’s some matter of dispute even to the present day over who the true musical architect of “Criminal Minded” was (Ced Gee of the Ultramagnetic M.C.’s has been credited by many as a “ghost producer”) there’s no disputing the strong music backing this cut. Stripped down to only a snappy drum track for most of the lyrics, the song builds up and comes back down between verses with a slow-winding bassline groove perfect for any dancehall. High pitched sounds punctuate the bassline in places for a minimalistic melody, particularly at the end as the song winds down, and vocal samples of KRS-One sing-song chanting “la la la la la la la” are interspersed throughout. It’s textbook 1980’s hip-hop which still pumps in any soundsystem to the present day, as does the powerful lyrics KRS-One penned for “Poetry”:

“You seem to be the type that only understand
The annihilation and destruction of the next man
That’s not poetry, that is insanity
It’s simply fantasy far from reality
Poetry is the language of imagination
Poetry is a form of positive creation
Difficult, isn’t it? The point? You’re missin it
Your face is in front of my hand so I’m dissin it!”

It’s important to note that “Poetry” is the opening track of “Criminal Minded,” something that may not appear to be that important in an age of digital downloads and album ripping where you can shuffle songs in any order. “If this meaning doesn’t manifest put it to rest/I am a poet,” quips KRS in the opening verse, and this song SETS THE TONE for the entire album. If you dropped the needle on the outside of the record after taking off the shrinkwrap, this would be the first song you heard. If you bought the cassette and popped it in your Walkman, same thing. KRS-One is making a simple but powerful point by putting this first – hip-hop IS poetry and what you’re hearing on this record is the workd of a timeless poet. “Poetry” makes the most out of minimal James Brown samples and a pounding BA-BUM, BA-BUM-BUM bassline and sets the stage for KRS-One to elevate hip-hop rhymes to the stage which they’ve belonged on all along. Not only did KRS’ “Teacher” persona emerge in this song, it became clear he was an orator who sought not only to deliver entertainment but uplift the entire art & culture of hip-hop. In a way MC Shan should be thanked for making this possible, since at least two of the songs on “Criminal Minded” are written as parodies OF MC Shan’s hits. The clearest example is “South Bronx,” which is musically arranged to mimic “Queensbridge” and even features BDP mocking Shan’s chorus “The-the-the-bridge, QUEENSBRIDGE” by repeating “South Bronx, South South Bronx” on their own. The clearest shot at Shan was the final lines of the track, where KRS-One even imitated MC Shan’s flow on the original but rewrote the words as a diss:

“As odd as it looked, as wild as it seemed
I didn’t hear a peep from a place called Queens
It was seventy-six, to 1980
The dreads in Brooklyn was crazy
You couldn’t bring out your set with no hip-hop
Because the pistols would go…
So why don’t you wise up, show all the people in the place that you are wack
Instead of tryna take out LL, you need to take your homeboys off the crack
Cause if you don’t, well, then their nerves will become shot
And that would leave the job up to my own Scott LaRock”

Sadly very few people today understand the context of the parody the way anybody from the hip-hop scene in the 1980’s would have. Stations which play “rap classics” for an hour or two rarely bother to play “Queensbridge” and “South Bronx” together, but if you heard any hip-hop station, DJ or mixtape of the era the temptation to pair them would have been irresistable. MC Shan was undoubtedly the bigger star at the time, but many people have concluded that KRS-One “won the war” between the two, and it’s hard to resist the temptation to reach that conclusion after hearing “The Bridge is Over.” It’s one of the fiercest diss songs in rap history:

“What’s the matter with your MC, Marley Marl?
Don’t know you know that he’s out of touch
What’s the matter with your DJ, MC Shan?
On the wheels of steel Marlon sucks!!!
You’d better change what comes out your speaker
You’re better off talkin bout your wack Puma sneaker
Cause Bronx created hip-hop, Queens will only get dropped
You’re still tellin lies to meeeeeeee
Everybody’s talkin bout the Juice Crew funny
But you’re still tellin lies to meeeeeeeee”

Kind of amazing when you consider KRS-One & Marley Marl just recorded an album together, but 20 years is more than enough time for the two sides to bury the hatchet. In fact hip-hip artists who BEEF today and then pull out their pistols to settle it ought to learn a thing or two from KRS-One and MC Shan, who kept their feud on wax and used it to inspire each other to make better tracks. In fact given I wasn’t much of a rock music head at the time (you may feel free to laugh at me now) I thought AC/DC had ripped off BDP’s “Dope Beat” the first time I heard “Back in Black.” It never even occured to me on an album full of equally dope tracks like “Word From Our Sponsor” and “The P is Free” that KRS and Scott LaRock hadn’t come up with that riff on their own. There’s so much to be said about “Criminal Minded” it’s hard to contain it within just one review, but what needs to be said more than anything else is that even though this record is still hard to find in stores today THERE’S NO EXCUSE TO NOT OWN IT IF YOU LOVE HIP-HOP MUSIC. Some critics will be tempted to say the often minimalistic production of this album is outdated, but I think it draws strength from that simplicity as it sets a backdrop for strong bass beats and powerfully written rhymes. The history of KRS-One is still being written today so it’s hard to say whether or not this is his greatest or most important record, but it’s definitely in the top five. “Criminal Minded” is still as relevant today as it was 20 years ago.