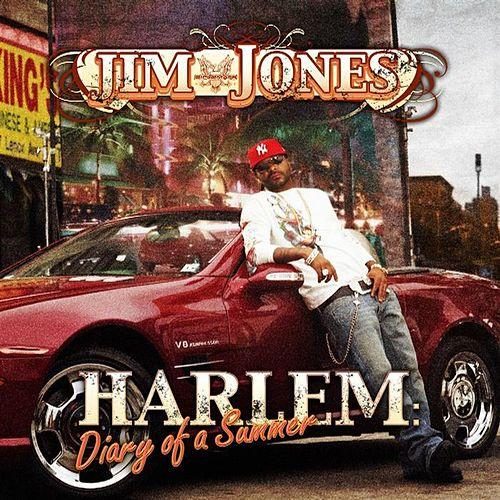 As a music critic one has to stay as neutral and unbiased as possible. It’s not always an easy task and to be honest sometimes it’s inevitable that personal tastes influence reviews, both in positive and negative ways. I’ll easily admit I’m a huge Dipset fan and you only have to look at my Year in Review article to see how highly I think of Jim Jones in particular. But my problem with this review is not that I may be giving Jimmy too much credit because I’m a fan, instead, after listening to “Harlem” I actually had to take a step back and give Jimmy a second chance despite my utter disappointment. My disappointment stems from the fact that, for the most part, the Jim Jones from “On My Way To Church” is gone on “Harlem: Diary of a Summer.” Instead a more mature and business savvy Jim Jones emerges with more tracks aimed at radio and crossover play and less of the gangsta Jim Jones I’ve grown to love. So while my first instinct after listening to “Harlem” was to bash Jimmy for straying from his fan base, I had to give the CD a few more listens and evaluate the album for what it is, a commercial rap record by a gangsta rapper. Taken in that context “Harlem” actually shapes up to be a damn good CD that’s sure to make Jimmy a bigger star than he already is.

The album starts out strong with “My Diary,” a heartfelt track that finds Jim Jones getting deeper than he ever has on wax. Amadeus’ production is soft enough to let Jimmy shine and the R&B hook by Denise Weeks is just icing on the cake. This is followed by the completely unnecessary “Zeke Interlude,” which finds Freaky Zeekey talking shit about everything and anything, though the track may be proper on a mixtape, it does nothing for the album. Jim Jones’ redeems himself quickly with “G’s Up,” the album’s hardest track. With Pete Rock blessing the beat, Jim does what he does best, lacing the track with unabashed gangsta lyrics. “J.I.M.M.Y.” follows, and along with “Harlem,” are the only two tracks that feature the chipmunk soul approach on production. Both tracks do their job well and give Jimmy and Harlem, respectively, an anthem of their own.

The next standout track is “Honey Dip,” which may be Jim’s best commercial track to date. Zukhan’s bass heavy beat hits hard and Jim, J.R., and Juelz all spit verses dedicated at the ladies. The track actually represents the album well as Jim’s best moments on “Harlem” come when he addresses the ladies. “I’m In Love With a Thug” addresses a recurrent topic in Hip-Hop, but Jim gives the track its own flair. “Baby Girl” was the album’s lead single and finds Zukhan and Jimmy teaming up once again for a body-moving anthem. “Summer Wit’ Miami” is arguably the album’s best track and finds Jim once again dedicating a track to the ladies:

The Jim Jones found on these tracks is different than what fans have known in the past, but he still handles his job well.

The rest of the album features decent tracks more in line with Jones’ previous work. Hell Rell shows up for a hardcore verse on “Penitentiary Chances.” “What Is This” is your typical Dipset anthem, while Juelz tears up the beat on “Ride Wit’ Me.” The album only features three tracks that are outright bad. “We Just Ballin'” features a horrible female emcee in the form of T.K. and a recycled sample for a pathetic attempt at a club track. Though the inclusion of Fatal Hussein on “Tupac Joint” is admirable, the use of the beat from “Homies and Thugs” just leaves you wanting to hear the original with â€˜Pac, Face, and P. The last bad track is the lame synth-infused southern track, “What You Been Drankin On?” Looking at how much radio play the track has received I’m sure most fans would disagree with me, but personally the track is disappointing. If the bland beat wasn’t enough, the track also features Hip-Hop’s worst emcee. No, I’m not talking about Diddy (I’m actually a fan), instead I refer to the high-pitched, annoying, no flow-having Jha Jha. How an emcee that bad got a deal with some one like Jimmy is beyond me.

Despite its occasional bad tracks and Jimmy’s new approach, “Harlem” is still a dope album. It probably won’t be bumped in the same way “On My Way To Church” was, but it’s sure to be blasting out of car stereos just as much. For those yearning for Jimmy of old, cop this for tracks like “G’s Up,” but be sure to also cop the latest Dipset mixtape for that raw music we’re used to. And even if your as disappointed as I was initially, give Jimmy a second chance, you’ll be surprised how quickly you’ll be singing along to tracks like “Honey Dip” and “Baby Girl.”