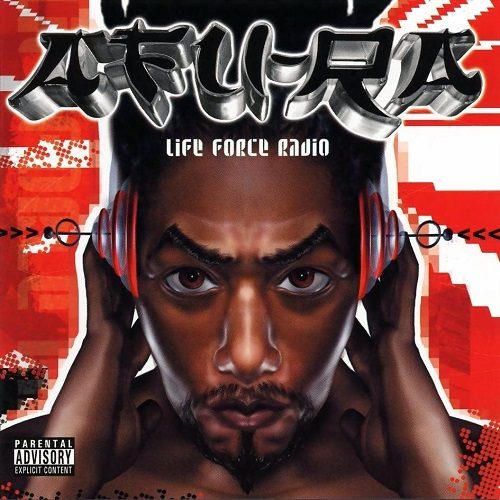 Despite having gotten his career started by playing second fiddle to Jeru the Damaja on the song “Mental Stamina” almost a decade ago, Afu-Ra has shown a surprising resilience in a fickle music industry. He kept his name alive in the music industry by appearing on the sequel “Physical Stamina” on Jeru’s second album, and as the Damaja’s career started to slide into obscurity Ra rose to new heights with the popular 12″ single “Whirlwind Thru Cities” in 1998. His 2000 album debut “Body of the Life Force” maintained his nascent fame in underground circles, though some critics (including ours) felt that Afu-Ra without other rapper cameos to support him just wasn’t that interesting.

Despite such criticism, Koch Records probably felt the success of the previous album’s single “Big Acts Little Acts” featuring GZA merited another full-length release from Ra, so he returned in 2002 with the sequel “Life Force Radio.” And yes, it can be argued that the selection of cameo appearances on this album do strengthen the LP’s overall impact given they are of such high caliber. Who is going to complain when you have rap legend Big Daddy Kane dropping guest verses on “Stick Up,” popular macho maestros M.O.P. blazing automatics on “Crossfire” or oft-sampled soul singer Teena Marie providing pipes on “Open”? These are excellent tracks owing their success not just to the guests but to beats by Curt Cazal, Eric S. and Domingo. On the DJ Premier produced “Lyrical Monster” though, Afu-Ra PROVES he can hold his own:

“Lookin like Leatherface, drippin on the dancefloor
Too much hypocrisy, up in the market B
It ain’t about talent, it’s all about the currency
My magnum opus addictive plus the dopest
Maybe I write a line and Farrakhan’ll quote this
Ya got status but can’t work the apparatus
How could a project sell millions, talkin bout millions
when half of the buyers ain’t seen a thousand?”

It’s not hard to see why Afu-Ra remains popular in the underground. Combining the sharp incisiveness of Talib Kweli with a flow ability and vocal tone comparable to Inspectah Deck, Ra definitely has the skills to pay the bills and a sound to please the ears. All that a rapper with Afu-Ra’s talents needs is a selection of vintage beats to make the picture complete, and one suspects executive producer DJ Premier took an active role in making sure no whackness snuck into his album. Easy Mo Bee shows how rap and rock’n’roll SHOULD be mixed on the anthemic “Hip Hop,” though the underrated veteran producer also flexes his chops on the symphonic “Perverted Monks” and the subtle “Readjustment.” DJ Premier blesses Ra again on “Blvd.” featuring Guru, while Curt Cazal drops another gem on the fondly reminiscent sounding “1, 2, 3.” Even True Master and Ayatollah get some love on “Dangerous Language” and “Think Before You” respectively, while relative unknown Needles rocks the bells with the smooth flowing “Miss You”:

“So I’m – trapped, in The Matrix
I swallow you swallow you, insoluble
Sonics able to follow you follow you
I’m gettin around like Ronald McDonald do
Especially acid crews erase they point of view
Your ship is sinkin you’re thinkin you’re blinkin
Eyes is winkin, my beacon carvin out light
for your reasonin”

Afu-Ra’s writing is far from boring; in fact discerning his points often requires a second or third go around just to pick up where the scientifical rapper is coming from. When paired with quality beats for the rapper to bless his vocals on, that extra spin is certainly not going to be a painful one. This already excellent album also came with a bonus second disc including three more tracks: “Whirlwind 2”, “Uno Momento” and a DJ Premier remix of “Big Acts Little Acts.” Whether or not future copies of this album come with the bonus can’t be guaranteed, but what can be is that “Life Force Radio” is an album that’s heavy on content and light on filler. If you’re looking for a major label album with an indie label’s quality beats and rhymes this summer, Afu-Ra’s sophomore album would be an excellent choice.