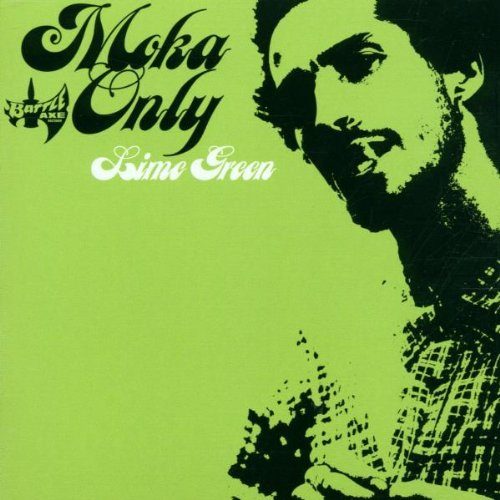 As a Canadian hip-hop fan (and a fan of Canadian hip-hop) I’m always happy to hear a great album from north of the border. Such is the case with Lime Green – Moka Only’s solo debut full-length on Battle Axe Records. This entire record is nothing but laid-back, and is perfectly suited for just sitting back and chillin’. Nothing wrong with that. Where Moka Only excels is definitely his calm, musical flow. With a voice that can best be compared to Common, Moka is easy on the ears, no question. His rhyme style is abstract and relaxing, and he’ll often make smooth transitions between rapping and singing and back again, without the average listener ever even noticing he’s done it.

Granted, Moka isn’t exactly a lyrical wizard. In fact, he’s far from being one. But he more than makes up for that weakness by sticking to each and every beat like glue. It’s amazing. Throughout the entire LP (which clocks in at just under an hour), Moka never comes anywhere close to falling off the beat. Moka’s voice absolutely melts into each track, essentially becoming just another element of the beat. So his lack of important points to make is easily forgivable. Track after track, Moka flows on, all the while avoiding any of rap’s typical cliches. He doesn’t spit a single battle verse and he never brags about dough and ho’s. (In fact, he does quite the opposite on the self-produced “Imagine Me” where he jokingly repeats the line, “imagine me doin’ a song about money.”) But he never really raps ABOUT anything either. In true abstract visionary form, Moka regularly comes forward with lines like this one from “Invisible”, where he speaks about the spirit of music:

“.. Everybody need it but the world can’t see it
If the word can’t see it, then how can they believe it?
I bet ya ain’t thought about it
How do you conceive it?”

So Moka is nice on the mic. That much is easy to see. But he is also a fairly talented producer. Handling exactly half of the album’s production (7.5 of 15 tracks, co-producing one), he proves he is more than competent. Unfortunately, none of Moka’s beats ever excel beyond the realm of “pretty good.” Luckily, there are plenty of guest producers on the album, and all of them bless Moka with some very nice background sounds. Flow Torch and Sichuan each contribute once, on “Live It” and “Team Work” (featuring LMNO), respectively. Long-time Battle Axe collaborator Paul Nice shows up twice, on “Rolling Along” and “Crunch”, and Mr. Denton is responsible for the album’s catchiest tune, “August Asphalt,” which had potential to be a radio hit. Ron Contour handles two tracks: “Ferry Tales” and “Invisible”, both of which sound amazingly day-dreamy â€“ very, very nice.

The album also has plenty of guest MC’s, but unlike their counterparts behind the boards, they achieve mixed results. Sun Spot Jonz teams up with Moka on “Not the Man I Used to Know”, but doesn’t do anything at all to improve the track. Likewise, on “Team Work”, Battle Axe label-mate LMNO sounds hungry and could have been great, but spits some strictly mediocre lines:

“If their egos were pigeons.. Pow! I’d feed ’em aspirin
Oh yeah, the answer to the question you’ve been askin’:
‘Why’d you leave Visionaries?’ Man, you guys are crackin’.
If I was born in Alaska and left I’d still be Alaskan.. “

Nifty. But it’s not all bad. Mad Child (who is also the album’s Executive Co-producer), proves why he is without question one of the best white MC’s around on “Formula Fresh” and shows up again (this time with Prevail, the other Swollen Member) on “Crunch.” “Crunch” could have been excellent, as Prev and Mad Child show why they damn well deserved their 2000 Juno as best Canadian rap act, but the Paul Nice beat lacks soul and is too similar to the beat he created for Swollen’s “Lady Venom.” One thing that I like about Moka is that every time he’s got another MC on a track with him, it causes him to take his raps up a notch. This healthy competition is why guest spots are meant to happen in the first place and are very refreshing when compared to the average guest spot which only happens because the host MC can’t last for three minutes on his own.

Overall, “Lime Green” has its ups and downs. It’s definitely not for everyone, but those who will appreciate it will likely appreciate it one hell of a lot. To the people who can dig his style, Moka Only comes across as an old friend you grew up with, and his raps sound like his way of telling you what he’s been up to lately. This is the type of music that could cheer you right up after a shitty day, and if you ask me, that is something that is never unwelcome, especially in hip-hop.