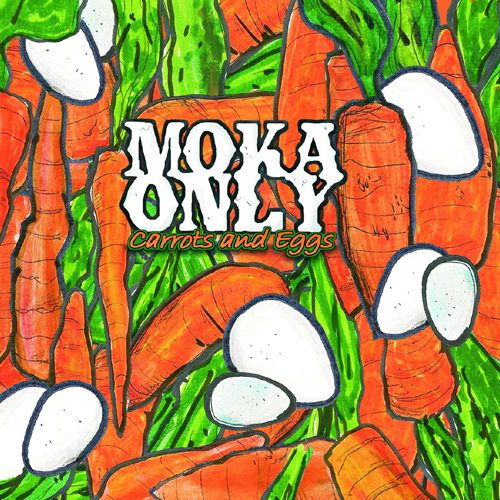 Moka Only :: Carrots and Eggs

A few years back I reviewed Swollen Member’s “Black Magic” and was very satisfied with the Canadian group’s output. Though I had heard about the group long before “Black Magic,” that CD marked the first time I actually heard a full length. Just as quickly as I became a fan of the group, the group ceased to be. Shortly after “Black Magic” was released, Moka Only officially left the group and Swollen Members saw its demise. The interesting thing is that just as I had slept on Swollen Members for so long I have slept on Moka Only. The man has no less than 15 solo albums under his belt dating back to 1994. To say I was surprised to hear this would be an understatement. “Carrots and Eggs” is his latest album and comes to us as a concept album of sorts. For one, the packaging is made entirely of recycled material and uses vegetable-based inks. That may be a hip-hop first. Urbnet could just be the world’s most eco-friendly record label, but more likely Moka Only is pushing a certain lifestyle to go with the whole “Carrots and Eggs” theme. The album itself features skits throughout talking about eggs and carrots and carrots and eggs. Outside of these skits, it’s hard to grasp what the message or theme of this album is. Using my own stereotypical preconceptions, I would assume the whole “Carrots and Eggs” thing and the eco-friendly thing would be pushing some sort of natural lifestyle, but the music doesn’t reflect that. Instead, Moka Only gives us 23 tracks of soulful, honest hip-hop.

The best insight on the thoughts behind every track on this album come from the man himself as Moka Only includes a track by track breakdown in the liner notes. Some artists would say the music speaks for itself, but getting the story and motivation behind the music is a nice touch. Though the notes give little insight on the “Carrots and Eggs” theme, they do give some background on the tracks. The “Carrotro” mentions carrots at the beginning but the remainder of the track is Moka’s reintroduction to the world:

“See I don’t mean to be far out, I just go the bizarre route
With my cards out, and I keep my heart on my sleeve
Fuck self doubt, you walk around like you got gout
Instead of clout, wobbling and hobbling til you all out of hope
I don’t slip on end of rope, I suspended it, I suggest you do the same
Really, what I’m supposed to do out the game
Shits still exciting to me, more titles to claim
So many new styles that I bury
The most exciting thing since the library
Yeah, journalists know it’s my turn to piss
On any artist, none of ya’ll retarded as this
The business is shit but you gotta persist”

Basically, Moka Only does what he feels he should do and doesn’t worry about what other people think. It can lead to perplexing themes, but the music itself is good so the complaint is small. The rest of the albums ranges from the universal to the abstract. “Grown Man Troubles” is a somber track about the stress of dealing with “grown man” problems which include paying bills and working a 9 to 5. “Obsolete Creature” is a little more abstract in the intro, but the title is Moka Only’s own way of expressing the challenge of remaining relevant in the rap game. “Star Fish” serves as a metaphor for women, or at least I hope that is the case as Moka Only lays some serious compliments on a “star fish.” Sadat X drops in on “The New Era B-Boy Pockets” where he drops a verse about staying in the game as the game changes around him and Moka Only contributes his own two cents explaining how pockets in jeans are so large they can serve as a “back pack” hence the title of the song. The track is good while it lasts, but at only two and a half minutes you wish it would have been turned into a full length song. In fact most of the tracks are on the short side. It doesn’t detract from the music but does make some of the tracks feel a little abrupt. The few longer songs lead to great results, including the entertaining “Clapsnare” where Moka begs producers to “stop using the snare clap from â€˜Voodoo’.”

This is where the geek in me comes out and gives his own twist on the “Carrots and Eggs” concept. Rare is a track on this CD that cracks the 3 minute mark and I have to say that on their own none of these tracks are very filling â€“ much like a single carrot or egg. When you mix all these short tracks together you do get a pretty decent “meal” and while I would never eat a meal consisting entirely of carrots and eggs, I can see how the combination might lead to a filling, if slightly unconventional, meal. This album can be described in the same manner as it is an entertaining, if slightly unconventional, album. The interludes may leave you scratching your head a little, but they are certainly entertaining. It’s also very impressive when you read that Moka Only produced, wrote, and basically did everything save the voiceovers on some of the interludes. Overall, I’d definitely recommend this CD to fans of Moka Only and Swollen Members alike. The album lacks some of the dark energy that made Swollen Members so great, but Moka Only is definitely dope by himself as well. Those unfamiliar with either Moka or his old group would likely be better served hitting up one of the group albums and then picking up “Carrots and Eggs” if they are so inclined. Consuming an odd meal such as this takes some preparation.