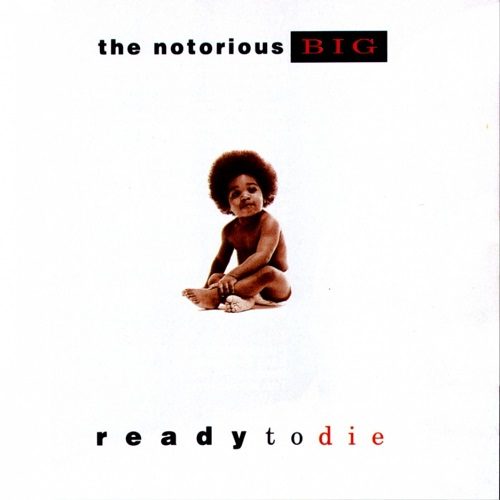 Christopher Wallace. Biggie Smalls. The Notorious B.I.G. Whatever name you remember him by now, it’s hard to imagine back in 1994 that he was a hot new rapper on the scene with a debut CD and a world of unlimited possibilities in front of him. Biggie was blessed with plenty of hot word of mouth about his album though; because although it was his first full-length LP he’d already made a name for himself with guest appearances on remixes for everyone from Mary J. Blige to Supercat. He even scored a hit with “Party and Bullshit” from the soundtrack to the film “Who’s the Man?”

With the up-and-coming Sean ‘Puffy’ Combs label Bad Boy Entertainment behind him and more positive buzz than a whole beehive could pack, everybody figured “Ready to Die” to be a hip-hop hit in 1994. The album was far more significant than that though. Displaying both a flair for storytelling and a mesmerizing vocal tone that was memorable then and legendary now, Biggie Smalls created one of the most enduring and classic hardcore hip-hop albums of the genres entire history. The group of producers who put his tracks together deserves not only a pat on the back but a STRONG pound on the fist for pure audio bliss. Easy Mo Bee, DJ Premier, Carl ‘Chucky’ Thompson, Jean ‘Poke’ Oliver (TrakMasterz) and the collaborative duo Norman & Digga all lace jam after jam. Even the one and only contribution by Darnell Scott is legendary, and if you don’t recognize his name you’ll surely know the pulsating bassline and hauntingly soft piano keys of the track “Things Done Changed,” the album’s first full-length song. Biggie pulls no punches on this beautiful track in showing you the brutality of Bedford-Stuyvesant:

“And now the shit’s gettin crazier and major
Kids younger than me, they got the Sky grand Pagers
Goin outta town, blowin up
Six months later all the dead bodies showin up
It make me wanna grab the nine and the shottie
But I gotta go identify the body
Damn, what happened to the summertime cookouts?
Everytime I turn around a nigga gettin took out”

Even those who thought that this was a vivid and powerful introduction to the LP akin to Kool G. Rap’s “Streets of New York” were probably not prepared for the raw verbal and audio assault of Mo Bee and B.I.G.’s “Gimme the Loot.” If this song isn’t the most hauntingly schizophrenic track in all of hip-hop, it’s easily top five. The entire song is a discussion between Biggie and an even darker alter-ego who both want nothing more than to rob, steal, and kill for a meal. The label must have felt Biggie went too far though as someone took the unusual step of censoring several lines in the song, such as the word “pregnant” in the line, “I wouldn’t give a fuck if you’re pregnant, give me the baby rings, and the ‘#1 Mom’ pendant.” Both Smalls are ruthless throughout though, with memorable lines like “Big up big up, it’s a stick-up stick-up, and I’m shootin niggaz quick if ya hiccup.” Those without a stomach for violence will probably want to skip this, but it’s a brutally honest portrayal of the “survival by any means” ethic which includes armed robbery and murder at gunpoint. I strongly suspect in true hypocritical entertainment industry fashion that they never would have bothered to censor Al Pacino doing the same things in a movie that Biggie just happens to be rhyming about on wax.

On the groovy and surreal “Machine Gun Funk” Biggie plays the quintessential braggart with lines like “Hold ya head, cause when ya hit the bricks I got gin, mad blunts, and bitches suckin dick.” “Warning” is the third straight Easy Mo Bee track on the album, and may be the best simply by being the most understated – allowing B.I.G. to weave an intricate plot of jealous rivals who want to rob him for his wealth after being “warned” by a close friend named ‘Pop’ who overheard their plan at a dice game. As Biggie breaks down his planned response to the jack attempt, he even counsels the listeners with some words of wisdom about fame and money:

“Damn! Niggaz wanna stick my for my cream
And it ain’t a dream, things ain’t always what it seem
It’s the ones that smoke blunts witcha, see your picture
Now they wanna grab the guns and come and getcha
Betcha Biggie won’t slip
I got the calico with the black talons loaded in the clip
So I can rip through the ligaments
Put the fuckers in a bad prediciment
where all the foul niggaz went”

The rest of the album from this point forward is no less brutal, visual, or musically beautiful. The title track “Ready to Die” is Biggie’s anthem of sorts, looking through the eyes of a child who had nothing and was fed a constant diet of capitalistic consumer culture on an empty stomach. Biggie rhymes show that he’s found a new hustle to keep up with the Joneses though – rapping: “Your face, my feet, they meet, we’re stompin; I’m rippin MC’s from Tallahassee, to Compton.” The one surprise listeners of this album may find at track seven though is that “One More Chance” is completely different from the smoothed out remix that became a top ten hit on all the charts when it dropped as a single. This version is worthy though, because it’s a much more rugged hip-hop interpretation of what getting “One More Chance” is:

“Look, I gotcha caught up in the drunk flow
Fuck tae kwon do, I tote da fo’-fo’
For niggaz gettin mad cause they bitch chose me
A big black motherfucker with G ya see
All I do is separate the game from the truth
Big bang boots from the Bronx to Bolivia
Gettin Physical like Olivia Newt
Tricks suck my clique dick all day with no trivia”

The one and only track that really needs to be skipped over on the entire album is what follows this one, an unnecessary and somewhat gross interlude full of sex trash-talking entitled which not suprisingly is called “Fuck Me.” Don’t make the mistake of skipping the next track though, a LEGENDARY rap duet between Biggie and Method Man which is among the greatest songs in EITHER’S extensive catalogue. Simply called “The What”, Meth and B.I.G. answer the question with the clarion call in the chorus that rings, “Fuck the world, don’t ask me for SHIT! Everything you get, you got-ta work HARD for it!” Method Man comes damn close to upstaging Biggie on his own album with the second verse of this song:

“Verse two, comin with that Olde E brew
Meth-tical, puttin niggaz back in I.C.U.
I’m lifted troop, you can bring yours wack ass crew
I got connections, I’ll get that ass stuck like glue, huh
No question, I be comin down and shit
Yo I gets rugged as a motherfuckin carpet get
And niggaz love it, not in the physical form but in the mental
I spark and they cells get warm”

“Juicy” comes at the midway point of this album, but is probably the song that got most people who never heard of Notorious B.I.G. or Biggie Smalls to invest their funds in an unknown rap sensation. The setup is vintage Christopher Wallace: a big middle finger at the beginning of the song to all the teachers who said he’s amount to nothing and people who tried to stop him from hustling to make money. Explaining what Biggie narrates over this smoothed out Mtume loop really doesn’t do it justice though – the man’s words speak for themselves:

“It was all a dream; I used to read Word Up magazine
Salt’n’Pepa and Heavy D up in the limousine
Hangin’ pictures on my wall
Every Saturday Rap Attack, Mr. Magic, Marley Marl
I let my tape rock ’til my tape popped
Smokin’ weed and bamboo, sippin’ on private stock
Way back, when I had the red and black lumberjack
With the hat to match
Remember Rappin’ Duke, duh-ha, duh-ha
You never thought that hip hop would take it this far
Now I’m in the limelight ’cause I rhyme tight
Time to get paid, blow up like the World Trade”

The line about the World Trade Center may seem hard to understand or eerie right now, but those who lived through the 90’s undoubtedly remember that September 11th, 2001 was not the FIRST time that terrorists attempted to destroy New York’s gleaming towers of commerce. Nevertheless Biggie’s point is the same from either his perspective back then or ours now – I’m going to be THAT famous. And with hit after hit on this debut album he certainly was, from “Juicy” to the remix of “One More Chance” to the song “Big Poppa” which solidified his place as the NEW ‘Overweight Lover’ of rap (Heavy D just hasn’t been the same since). The remarkable songs though are the ones that aren’t remembered for being top ten hits on a multi-platinum album, but the jeep bangers like DJ Premier’s “Unbelievable” which made B.I.G. as big a hero to underground rap heads as he was to pop music:

“Bandaging MC’s, oxygen they can’t breathe
Mad tricks up the sleeve, wear boxers so my dick can breathe
Breeze through in the Q-45 by my side, lyrical high
And those that rushes my cluthes get put on crutches
Get smoked like dutches from the master
Hate to blast ya, but I have ta, you see I smoke a lot
Your life is played out like Kwame, and them fuckin polka dots
Who rock the spot? Biggie!
You know how the weed go, unbelievable”

Is it an understatement to say this is one of the ten most important albums of hip-hop history? Hardly. With only one unfortunate interlude which can be easily dismissed and fifteen powerful rap songs sandwiched together from the “Intro” right up to the powerful and eerie Lord Finesse produced “Suicidal Thoughts” at the end, this is an album which encapsulates the best of New York’s hardcore hip-hop in one definining moment which also encapsulated the best of what Christopher Wallace had to offer the world. Biggie was the quintessential master of wordplay who could either scare you like Edgar Allan Poe or charm you like Cyrano de Begerac. Of course most people wouldn’t be impressed if you just read them the words of Notorious B.I.G. out loud, with no beat, one after another – it’s the deep timbre of Biggie’s booming voice along with the impeccable timing of his authoritative delivery along with some of the best rap music beats of the 90’s that ALL come together to make this one for the ages.