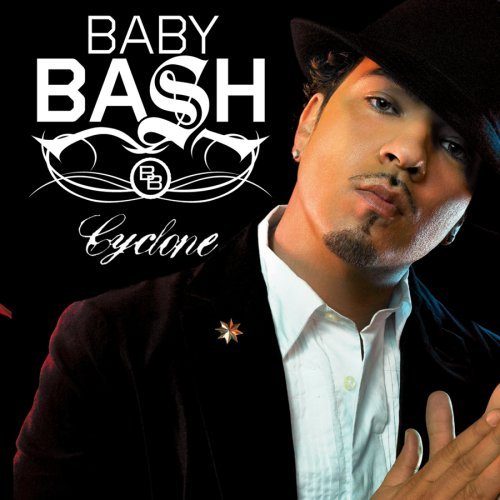 For entirely unobvious reasons to this writer, Baby Bash has been nearly silent since the 2005 release of “Super Saucy.” An artist can be almost completely forgotten in two years given the lightning quick “here today gone tomorrow” world we live in, not to mention how fickle the rap audience is in particular. Thankfully the talented Ronnie Ray Bryant didn’t just hang up his hat, put down his mic and take up a career in accounting. The layoff may have seemed interminably long to his fans and followers but it appears Baby Bash Bryant has been busy in those two years. The long wait is over and a new wind is blowing in the rap scene, one which Bash claims is “Cyclone” strength. The warning signs of a powerful twister coming down from the rap stratosphere can definitely be felt on the opener “Numero Uno”:

“It’s numero uno, number one chulo
Ridin on the slab with a top notch culo
E’rybody you know say they do it big
But we do it real sumo, that’s what it is
I’m a Dope House prophet, suckers can’t stop it
They might got muscle, but they got no logic
And I got a big heart, ’bout the size of a lion
Five minus fo’ girl without even tryin
Mmm, now that stir that up and add it up
From Me-xi-co to Ca-na-da
Professional, no amateur
And you can bust two times when I smack it up”

The producer’s name may be Kookie but there’s nothing crazy or screwy about the soulful horn breaks and the samples from “Let’s Get Together.” This is a hot start but the title track featuring the controversial T-Pain on vocals and Lil Jon on the beats may be even hotter yet.

“Now look at that dumper on the back of that bumper
She ain’t even playin when she shakin that rrrumpa
And though you ain’t know, she get lower than a muffler
Either with her girlfriends or showstoppin with a hustler
The way she move her body she might see the Maserati
She wanna put it on me, tryin to show me her tsunami
She make it hard to copy, always tight and never sloppy
And got an entourage and her own paparazzi”

The lyrics from Bash on this track do border on the simplistic, but that’s fairly understandable given it’s intended to be a crossover club and dance hit (particularly in an era when BET rejects Little Brother videos for being “too intelligent”). A much greater concern would be where longtime producer and collaborator Happy Perez has vanished to. Bash’s website namechecks him as being involved but when scanning the liner notes he doesn’t show up as a producer until track 9 “As Days Go By (The Love Letter)” featuring Paula DeAnda.

“Now I done came a long way, but ain’t gone too far
And hope this love letter don’t leave a big scar
So baby just hold on, and momma just be strong
Cause no one, knew the war would last for so long
The rockets the red glare, the bombs up in the air
I’m just doin my duty but missin it right there
So as days go by, I count, every minute
Wishin, I was home fo’ sho wit’chu in it
But the soldiers that I’m runnin wit are ready to blitz
This ain’t no video, this is just as real as it gets
I make some lifelong friends holdin down the frontline
And girl I can’t wait to get back in your sunshine”

This track at least reaffirms Bash’s lyrical credibility, because even if he hasn’t served in Iraq his rap definitely sees through the eyes of a soldier who has, expressing both the frustration and pride that comes with being a soldier. Perez’ only other collaboration with Bash on the album is on the final track “Mean Mug” featuring Mistah F.A.B. and Pimp C. Other producers ably fill the void though. “Supa Chic” has the same crossover potential that “Suga Suga” did four years ago with Jonathan ‘J.R.’ Rotem on the beats, and the potential future single “What It Is” featuring Sean Kingston has more of J.R.’s fine work. Scoop DeVille does slick work on the already released single”Mamacita,” while Ryan Tedder smooths it out on “Dip With You” so Bash can “get paid like I’m Vince McMahon.” He also does a fine job on “Thrill is Gone,” a track whose light guitar licks and background harmonies sound like a Happy Perez track of old.

The bottom line here is that “Cyclone” is almost exactly the kind of album you would expect from Bash, minus the heavy involvement from Happy Perez. While his signature sound is at times missed the album doesn’t suffer too much from his lack of production. If there’s one solid criticism to offer Baby Bash here it’s that his album is just a little too PG for hardcore hip-hop fans – the front cover doesn’t even carry a parental advisory sticker. Bash has certainly made an album that has a ton of crossover potential and could carry him to even greater heights of fame than his previous hits, but he may lose a percentage of his old school Dope House Records fanbase in the process. I wouldn’t necessarily say Baby Bash has an F5 force tornado here, but even the F2-F3 could still blow a lot of competitors off the map and leave him standing at the top of the charts. Time will tell.