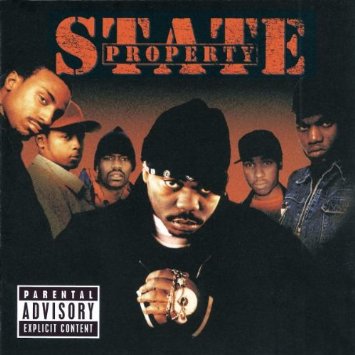 It’s easy to believe in this day and age that a movie is based on the soundtrack though, rather than the other way around. Beans does little to dispel this theory by both starring in the film and being on 9 out of 13 tracks on the album. If that wasn’t enough, the lead single “Roc the Mic” features Sigel tag-teaming with Freeway, a sound that should already be familiar to anybody who remembers “1-900-Hustler” from Jay-Z’s “Dynasty” LP. Fortunately they are a good combination when Just Blaze provides the beat, as evidenced by Sigel and his clever raps:

“Yes I is! Come on don’t test I kid
I firebomb cribs like Left Eye did
Notorious like that Bed-Stuy kid
+B.I.G.+ or small you can get it
‘Dead Wrong’, like tryin to brawl or strongarm a midget
I pull the 9 out my pocket I’m lyin
I pull the Mac out the closet, start firin
For you cats outta pocket, stop tryin”

With so many barely-known rappers sharing Sigel’s limelight, the soundtrack lives or dies by the strength of the beats. Six feet under is thus the only apt description for songs like Rick Rock’s weak “Do You Want Me,” a banal guitar pluck with sad synths that leaves you with no memorable impressions of Young Chris, Sparks or Oschino. N-O Joe’s bluesy Millie Jackson samples on “No Glory” though give Beanie Sigel a 70’s funk that puts his lyrics in the audio context of “Superfly” or “Shaft.” The lone Kayne West contribution “Got Nowhere” is both another gem for him and another Sigel and Freeway collaboration that seems to make perfect sense. The rest of the album falls somewhere in between, from the upbeat RuggedNess bounce of the ironically titled “Sun Don’t Shine” to the abyssmal re-interpretation of “Atomic Dog” by producer Qur’an on “Why Must I.”

Sadly if these are the rappers Jay-Z picked to “Takeover” the industry, he probably needs to rewrite the criteria for joining The Roc. Sparks sounds like a mediocre knockoff of Willie D, Oschino needs to get the mush out his mouth, Chris is just a wannabe clone of Beans, and Neef makes only one contribution to the album and barely even rates a mention. Realistically speaking the “movie” that this soundtrack is spawned from is probably as significant a cinematic achievment as “Choices” was for Three 6 Mafia. These days, ego stroking for big rappers routinely involves having their own films and their own vanity labels for releasing their own albums or ones by their lesser-known friends. “State Property” achieves both, but will probably only leave you with the impression that Beans is both a better actor AND rapper than most of his contemporaries.