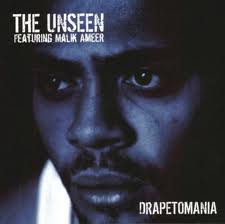 When I took a look at this album’s cover, the first question I had was, “What the hell is drapetomania?” Luckily for me, Jay Seagraves (the founder of Hip Hop Infinity, and apparently the man who discovered Malik Ameer) anticipated this question and was quick to answer it in the liner notes. According to Jay, “Drapetomania was the name of the disease assigned to runaway slaves. The theory behind this wicked diagnosis was that a slave would have to be insane in order to leave the good life of servitude and captivity in favor of the harshness of freedom and liberty.” Wow.

From that, I assumed that these cats definitely had something to say. Political rap used to be somewhat commonplace way back when, but these days we all know how rare it is for a rap album to actually have some deep, profound message. So of course I was looking forward to listening to what Malik had to get off his chest.

Now, at this point in my review, I’d like to acknowledge those critics out there who love to shower praise upon any and every MC who goes beyond the mainstream when it comes to lyric content. You know the type I mean. All too eager to rave about anyone who doesn’t mention dough, hoes, or hydro. But I, for one, would just like to point out the fact that rap is a form of music just like every other form of music. With that in mind, remember that at the very least, you should be able to nod your head along to the music you’re listening to. Yes, positive and creative lyrical content is a definite plus, but bad music is bad music, and like my man Evidence said, “MCs without a voice should write a book.”

And Ev’s line could very easily be applied to Malik Ameer. Don’t get me wrong though; it’s not that Malik doesn’t have good lyrical ideas â€“ he does. But listening to him rap, I start to wonder whether the field of music was really the proper route for him to take. See, all of the album’s lyrics are printed inside the CD booklet, but the thing is, they seem to translate a whole lot better written on a page than pressed on wax.

As you can imagine, it’s a little bit disappointing to have a piece of music in your hands that reads better than it sounds. Especially when you realize that with a better delivery, this below-average album could have been quite good. It’s just that “Drapetomia” is plagued with too many problems to be considered enjoyable music. But let me plead my case – do me a favor and peep these lyrics:

“We didn’t make that constitution, it made us
And gave us clauses that we applauded.
Laws with a catch.
Our rights denied so our rights we fetch.
And this is their threat yet we are still denied,
And now Bush is inside.
Anti-gay, anti-abortion, anti-affirmitive action,
Anti-welfare, and anti-health care.
Thus we must take action in the form of a death dare.
Yet who will rise to lead?”

Sounds reasonably nice, right? Sounds like something you could nod your head to, doesn’t it? But if you’ve never heard Malik Ameer, you’re probably imagining these lines being delivered by some deep, authoritative voice, a la Chuck D. Or at the very least, a voice you could take seriously. Alright, fair enough. Now picture them being spoken by Ol’ Dirty Bastard with the southern drawl of Trick Daddy. Because in all seriousness, that is pretty much exactly how Malik sounds. And maybe it’s just me, but I find it difficult to take ANYTHING seriously when I can’t stop conjuring up images of Dirt Dog swaying drunkenly back and forth the whole time. I challenge anyone to listen to the album’s opener, “Trance Form” and not think of ODB. To me, Dirty’s style is just not suited to opening minds this way.

However, even if you can get past Malik’s unusual vocals, there are still plenty of other things working against this record’s favor. I really don’t know where to start. For one thing, the beats do not impress. They aren’t all terrible, but some of them are (namely “Invisibility” and “Autonomy”), and none of them are really what you’d call “good.” The fact that they all sound almost EXACTLY the same doesn’t help either, especially since the CD only has 9 tracks to begin with. And even though it’s only 41 minutes long, “Drapetomania” had me falling asleep somewhere in between tracks five and six.

Also, I need to complain about the quality of the vocal recordings. They sound truly shitty, as if they were recorded over the phone â€“ long-distance. But it seems Mr. Jay Seagraves knew this ahead of time too, as he asks the listener to forgive the poor quality and focus on the lyrics themselves. But even that isn’t very rewarding since Malik Ameer is obviously intent on hitting the listener over the head with the points he’s trying to make. Basically that the government is evil and that our people need to make a stand and rise above. Unfortunately, Malik just comes across pathetic and almost whiny because instead of focusing on a solution, he just continually restates the problem. It’s all just really depressing more than inspiring though.

Ultimately, I was thoroughly unimpressed by “Drapetomia.” If you’ve heard one track off this album, you’ve heard them all, and chances are you weren’t very impressed either. Poor production quality and boring, repetitive rhymes make this one hard to recommend, especially when compared with the dope “thinking man’s” shit you could be listening to, from people like Saul Williams or dead prez. File this one under “waste of time.”