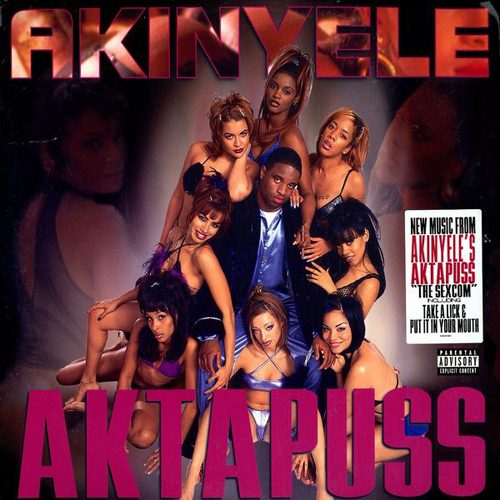 Here’s a rapper that makes me laugh. Not that he’s particularly funny — well he can be funny, but this time it’s more of a “I can’t believe he’s still at it” laugh. You see, Queens, NY rapper Akinyele introduced himself to the world on the same cut that made connoisseurs thirst for Nasty Nas: Main Source’s “Live at the BBQ”. That was in 1991. 10 years and 3 1/2 albums later Akinyele is still in the game, having continuously lowered the expectations surrounding his albums. If you’re only familiar with the new age Ak, the one that quite successfully advocated sexual freedom with “Put it in Your Mouth” and “Fuck Me for Free” in 1996, then “Anakonda” won’t surprise you either. But if comparing his 1999 effort “Aktapuss” to “Put it in Your Mouth” was already a let-down, then “Anakonda” is yet another step down for Akinyele.

Actually, I’d like to see a Akinyele/Noreaga duet, not only because they’re both from Lefrak, Queens, but also because they both got their very own way of seeing things and wording them. Check out Ak’s way of reasoning in “I Like”:

“…my game’s mental
ladies call my Shirley cause I get up in they Temple
Under 17 you better go get parental
advisory to slide with me
Shortie wildin’ like Coney Island:
she think that since she above this sign
she can ride with me
Well listen up, young hoe
this ain’t that Wonder Woman show
my lasso leave your ass tagged like Hondo
I got a bomb flow, even though I rhyme slow
my grown long range up in ya like Tonto
make you come faster than pronto
and I dumb out on your cat like Heathcliff and Mango
straight slappin’ on your ass like bongos
rubbin’ your hip slow
like I’m practicin’ fuckin’ calypso
The humps get harder and harder
Not from Harlem but I sex girls throughout the world like a Globetrotter
I only stop for a drink of water
get so much fish that the bitch start to call me tartar”

One thing about Akinyele is that there’s always a humorous note to his raps. He delivers them with a flow, a voice and a personality that others wish they had. Also, quite contrary to popular belief, a rappper talking about sex does not equal exploitation of women. Akinyele in particular makes sure everyone joins in on the fun, that’s why you’ll hear more female voices on “Anakonda” than Ja Rule can ever collaborate with, including female underground vet Uneek who runs down her own list of old acquaintances in “Do You Wanna?”

If there’s one achievement that Akinyele might be known for in the future, it’s his adventurous use of female singers. Musically, he has them doing things not even Busta Rhymes would dare ask to peform. Every track has a different chorus concept and while none of them are really aimed at the mainstream, he just might get lucky with one of them. But these interesting features do not detract from the fact that “Anakonda” is even more predictable than that flick with Cube and J. Lo of the same name. You’ll witness a precious Lord Finesse track getting laid to waste (“Love My Bitch”), a truckload of unknown guest rappers and tracks with raps that would sound that much better if it wasn’t so obvious that they’re just there to satisfy the listener’s lust for the sexually explicit.

If he really will be proud to present a (rap?) album by porn queen Heather Hunter as his website says, then Akinyele might laugh all the way to the bank, especially if he additionally succeeds in the adult movie business. (“Anakonda” is also a ‘movie soundtrack’ – whatever that means nowadays.) However, I like my kicks different. So when he says in the chorus to the track simply titled “The Rhyme”: “If I stop actin’ like I’m a mack and start rappin’ / muthafucka, you don’t really want this to happen,” I have to protest and say: that’s exactly what I want to happen. Consider any other Akinyele release before you pick up this one.