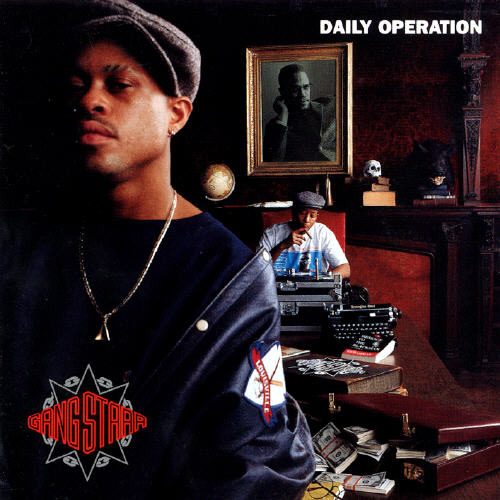 Understand this: that dynamic duo shit didn’t stop when Batman got cancelled. In fact, hip-hop created the ultimate dynamic duo when it married the DJ with the MC. Get the right producer/DJ together with the correct MC and you will swear you’re hearing the word of God. In the late 80’s Eric B. and Rakim were an obvious example of this, Kool G. Rap and DJ Polo being a less obvious one. However, around that time a MC/DJ duo from Massachusetts/Texas were just completing their first record. Within five years they would create one of the best hip-hop albums ever made. In a decade they would become a household name (in real hip-hop households, at least).

See, when some “hip-hop” heads think MC, they think Jadakiss, Jay-Z, and maybe Rakim; when they think DJ, they think of Timberland, Andre Young, and possibly Rockwilder. However, those that know hip-hop also think of Guru, the intelligent GangStarr MC with the smooth voice that congers visions of a smoky uptown lounge. To counterpoint Guru’s voice (or KRS-ONE’s, Jay-Z’s, or Biggie’s, for that matter) is DJ Premier, a man whose beautiful, minimalist jazz loops sound so effortless that they can make any hip-hop lover want to save up their pennies for a AKAI sampler.

GangStarr has made some unforgettable music together. You may have “Full Clip,” the best-of double CD released a couple years back – it’s a great place to start. Now you’re required to go back and get their magnum opus, “Daily Operation.” It’s like having a best of Nas without owning “Illmatic.” The album, as a whole, is a statement — a perfect, unabridged statement. Like the best record from the N, the A, to the S-I-R, GangStarr’s third album is relatively short (about 50 minutes), but it also packs more memorable lines, concepts and — you got it — asswhoppinz than a Martin Scorsese flick. These motherfunkers were so confident that Guru lists ALL his lyrics in the linear notes and DJ Premier lists NO samples on that somamabitch — and lets keep in mind that this was the same year that MC Hammer was getting sued by Rick James. This shit is straight hip-hop, no chaser.

The epitome of Daily Operation is “Take It Personal,” which, along with the jazzy “Ex To The Next Girl,” was a video single from the album. The ill drum pattern, three-key piano loop, and straight-evil bassline complement the shit Guru has to get off his chest. His monotone baritone, calm throughout the whole cut, makes his stewing anger even more menacing:

“I never thought that you would crab me
Undermine me, and backstab me
But I can see clearly now the rain is gone
The pain is gone, but what you did was still wrong
There was a few times I needed your support
But you tried to play me like an indoor sport
like racquetball, tennis, pool, whatever
All I know is you attempted to be clever
Nevertheless, cleverness can’t impress
Cause now you’ve been expose like a person undressed
cause I see through you, I’m the Guru
Now what you gonna do when I step to you
and when I pay you back I’ll be hurting you
This ain’t no threat so take it personal”

Any other rapper would say “You fucked up, son,” and then proceed to talk about how much coochie he gets. Guru, however, makes sure you know he’s pissed, why he’s pissed, and, most importantly, that payback’s a motherfucker. He’s like Edgar Allen Poe with a beat.

As for Premier, his album performance raised the bar on ALL DJs and, consequently, marked a turning point in his career. The following decade would be spent lacing literally every incredible MC and group (sans Tupac), including Nas, Biggie, Big L, M.O.P., KRS-ONE, etc., etc., etc. His genius, first peeking through on GangStarr’s excellent second album, Step Into The Arena, reached its climax on this third release where it’s obvious that Primo did more digging than a Pittsburgh coal miner. Track 9, “2Deep,” has a chorus that chops up James Brown’s grunts with — get this — the sound of someone pouring a glass of damn water! If that weren’t enough, the water actually correlates to Guru getting deep on his religious and ethical beliefs. Not to mention that water is a religious symbol of knowledge. We’ll just stop right there.

Coming up with Premier’s best cut on the album is harder than Chinese checkers backwards, but arguably it’s “I’m The Man,” a four-minute battle royale between Guru, Lil’ Dap of Group Home, and Jeru the “Where Is He Now?” Damaja. Each man gets his own unique beat, followed by a unique breakbeat between each MC’s verses. Add that shit up. In short, Primo created five dope beats for one cut, each complementing the featured MCs style. Keep in mind that this was ’92, and no one was really doing crazy “switch beat mid-song” shit, Ice Cube’s “Jackin’ For Beats” notwithstanding. In short, “I’m The Man” is one of the precursors to beatswitching songs so popular today, especially in Timbaland’s work (see Jay-Z’s “Come and Get Me” from 1999’s “Vol. 3”). As for Premier, he holds it down amid the five-beat chaos: Guru’s smooth beat works, as does Lil’ Dap’s hair-raising bass drop. Jeru, however, KILLS his beat, foreshadowing how he would straight murder on his own Primo-produced first single, “Come Clean.” Peep Jeru over the Charles Mingus’ assisted bassline:

“I’ll tap your jaw, you probably heard it before
step to the bedlamite I’ll prove my word is law
drugstore with more, dope rhyme vendor
not partial to beef; the chief ambassador
niggaz get mad cuz they can’t score
like a wild west flick they wish to shoot up my door
but I incite a riot, don’t even try it
bust up chumps so crab kids keep quiet
like I said before, I tap jaws, snatch whores
kill suckers in wars, vic a style you said was yours
money grip wanna flip but you’re fish
house the mic like your hooker and did tricks on the bitch”

It’s not all about war, though; at least not of the MC battle sort. Guru gets deep on cuts such as the catchy “The Illest Brother,” which explains how being hard can leave you stiff, and the heart-breaking “Soliloquy of Chaos,” a non-fiction narration of how a brother was killed at a GangStarr concert. If you want to get deep, though, go straight to Track 12, “Conspiracy.” Over Primo’s spliced George Bush samples Guru addresses everything from AIDS to white Jesuses. His most profound statements are about the rap industry, making the cut required listening for any aspiring rapper right after ATCQ’s “Show Business”:

“Even in this rap game all that glitters ain’t gold
now that rap is big business the snakes got bold
They give you wack contracts and try to make you go pop
cuz they have no regard for real hip-hop
They’ll compare you to others and say: “but yo, he sells”
and you know in your heart that he’s weak as hell
So you say: “I ain’t doing that corny stuff”
but they tell ya that your chart positions will go up
Sometimes they front big time and make you many promises
and when they break ’em then your mama says
“Son you’re making records but that guy seems shady”
it could be too late and your career could be played G
I hope you listen to the things that I’m sharing see
we all have a job to combat the conspiracy”

In fact, cuts like “Conspiracy” show the supreme strength of GangStarr: they can make you bob your head while still taking you to that next level. Guru gives food for thought, and yet shows his tight MC skills. Primo samples running water and slamming piano keys, yet makes his beats better than half of the pop-and-synthesizer shit that’s out there now. And this album is ten years old. In short, nobody can really fuck with this album. Still.