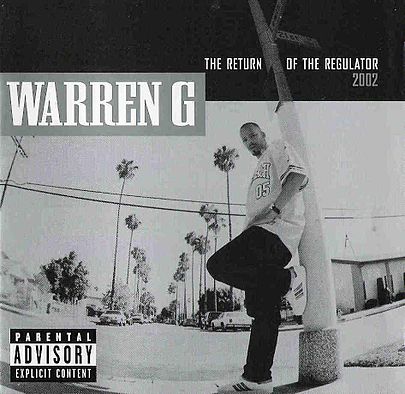 Warren G :: The Return of the Regulator

Relentless requests have finally made us take a look over our shoulder to see what was up with Warren G’s recently released “Return of the Regulator” album. I must start by saying that I always had an unreserved admiration for Warren G. His instantly accessible music as well as his easy-going demeanor stand in stark contrast to the rap stereotype of loudmouths making loud music. Warren G is the very definition of laid-back, and you can tell from listening to his music. That, to me, is a sign of artistic honesty. As the ‘rap star’ that he is, Warren G comes off more truthful than most of his peers. It certainly helps that he produces his own music. That way he doesn’t have to adapt to a producer’s vision of how he should rap. It works the same way for Warren G the trackmaster: He doesn’t have to deal with the pressure of having to sound like all the other producers or come up with the next new thing just so that rappers come knocking at his door for beats. I used to wish that Warren G would continue to produce other people’s albums instead of limiting himself to his own, but maybe that’s the way he feels at ease the most, and we wouldn’t want Warren to forfeit his mellow mood, now would we? Anyway, Warren G simply being himself may be one of the reasons people still check for him, even though his record sales steadily declined after his multi-platinum debut.

Both title and cover of his fourth album try to take up the initial big splash he made back in ’94 with the song “Regulate” (off the “Above the Rim” soundtrack). You’ll be looking in vain for a song title with the ‘R’ word in it though. Still, Warren doesn’t stray from his original formula too much either: soulful music and a string of guest rappers and singers. Well, there is a first. For the first time Dr. Dre earns production credits on one of his half-brother’s albums. The lead single, “Lookin’ at You” relies heavily on the keyboard drops that Dre has been favoring as of late. The ladykiller role may be new to the G Child, but as long as partygoes can identify with his mack mode and find the cut’s bump apt to bounce to, I’m not hating. The only other track that’s not produced by Warren, Soopafly’s “Somethin’ to Bounce To,” is more rooted in the typical West Coast funk. But G Funk was never a simple derivative of P Funk, at least not Warren G’s brand of G Funk. There was a distinct bluesy feeling to his first album “Regulate… G Funk Era,” which has disappeared over the years. Today it seems as if Warren G’s music is missing that special something you might call ‘vibe’, the musical cement that holds everything together. Some of his new songs will have you reluctantly nodding your head, nothing more. Take “Here Comes Another Hit,” which despite Nate Dogg being on the hook won’t make its way to the dancefloors very often.

“This Gangsta Shit Is Too Much” enters your ear with a more confident strut, with guitar licks and strokes of strings livening up the scene. Butch Cassidy tells Warren to “keep it gangsta,” but to me it looks more like he keeps it “real” (another of those tired phrases that still have a grain of truth in them): “Don’t be amazed you see me in the hood / off-TV, totally un-Hollywood, still to the good.” Sometimes it’s hard to believe these rap stars can actually be brought to life. We’d have to witness it with our own eyes. Until then I admit that saying “we all say that we real with it / until busters reveal how we really did it” is a clever way of claiming you’re +real+ while admitting you’re still only +claiming+ you’re real. But in the end, what counts is if a rapper can make us feel his rapping persona and educate as well as entertain us:

“What y’all thought, I wasn’t gon’ return with a hit?
Too much smokin’ that sherm and shit?
I learned this from the best that got y’all sprung
‘The-the Doctor’ – Andre Young
Compton, L.B. – ain’t nothin’ y’all can tell me
goin’ hard on the yard till my dogs bail me
they tells me I can’t proceed with it
I came back and got O.G. with it
We get it crunk, spit it when we drunk
committed to that shit that make the gangstas thump”

But Warren G aims to make the gangstas think as well. “Young Locs Slow Down” features once again Butch Cassidy, plus veteran West Coast rhyme sayer WC who schooled youngsters more than a decade ago about the dangers of gangbanging on Low Profile’s “How Ya Livin’.” Warren was surely among those who took heed back then, because he’s got a similar message today:

“And if you bang, homie, do that
but when your ass gets slapped with that 25, handle that
And all you see is the glamour and gold
don’t know the other side of the game where it’s scandalous and cold
Your destiny’s in your hands, you got control
wastin’ time with your life till your ass is old
tryin’ to be bold, a hog and a pimp
Eighteen years old, HIV and a limp”

Another song with a distinct conscious edge is “Ghetto Village,” which makes extensive use of a Stevie Wonder vocal sample. But due to the particular section of “Village Ghetto Land” that Warren samples, his version is much more upbeat than the original song. However, lyrically Warren kinda fails to meet his high ambitions with just a bit too simplistic lyrics. Coolio did a better job of crafting something new out of a Stevie Wonder song (“Gangsta’s Paradise”). The dedication to his hometown, “Streets of LBC” is also strong on the vocal side as it is almost a rap part-song. Voices also play an important role in the adventurous “Speed Dreamin'”: You got the original ‘G Child’ high-pitched helium voice, you got the unique flow of Mista Grimm (“I got the chronic, it’s ferocious / you can feel it in your bones like osteoporosis / West Coast shit, I’m grabbin’ my gonads / and slangin’ gangsta vocab straight off the notepad”) and last but not least the husky and in more than one way high voice of George Clinton. A similar line-up can be found on “G-Funk Is Here 2 Stay,” where Kokane takes Mr. Clinton’s place. The most high-profile joint venture on “Return of the Regulator” is certainly “Yo’ Sassy Ways.” While they ruined their 1999 cut “Game Don’t Wait” (off Warren’s “I Want it All” album), this one is much more apt to rekindle interest in a 213 ‘reunion’ with Snoop Dogg, Nate Dogg and Warren G showing the world how they originally got down in the streets of LBC.

“Return of the Regulator” may not be Warren’s strongest effort, but it definitely is a step forward after the lackluster “I Want it All.” As expected, the Regulator didn’t go out on a musical limb for the new millennium. I do miss the innocence and innovation that distinguished his debut album, but if I take a step back and hold the closing “Keepin’ it Strong,” dedicated to his departed mother (also remembered in his song “My Momma (Ola Mae)” from 1999), up to the carefree “Regulate… G Funk Era,” I have to acknowledge that the G Child is a grown man now.