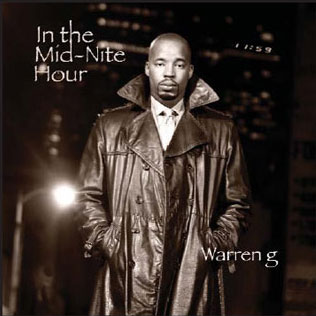 Warren G :: In the Mid-Nite Hour

I always like to do a little research before a review to see what extra information I can dig up to pass along to the public. In Warren G’s case that might not really seem necessary. Even relative new jacks to the hip-hop arts probably know he’s half-brother to Dr. Dre, a super producer in his own right, and the architect of hits like “Regulate” and “I Want it All.” Long-time fans also know he tends to drift in and out of the spotlight, taking two to three years off before dropping his new albums. The gap between “The Return of the Regulator” and “In the Mid-Nite Hour” is one of the longest yet – just shy of four years.

That alone was reason enough for me to find out more about the people behind putting this record in stores – Hawino Records and Lightyear Entertainment. I wanted to see if they had scooped Warren up after last year’s commercially dissapointing 213 album, or if Warren had a project and was just looking to get some distrubution. Lightyear seems to have a non-functioning website (lightyear.com) and a track record of releasing some of the worst DVD’s and hip-hop movies of all time. In fact the DVD Verdict review for their release of “Treasure N Tha Hood” is so damn funny, I wish I had written it myself. Hawino Records on the other hand seems to have some measure of credibility. While Warren seems to be their only big name star, their website lists some other hopeful up-and-coming artists on their roster. You probably haven’t heard of Asesino or Strapt, but sharing a record label with a renowned producer like Warren can’t be the worst thing to happen to them. Unfortunately beyond that the Hawino site is a bit suspect. Their news section reads “coming soon” and their tour page only lists dates that Asesino and Warren G already played in August. The only other thing I could glean from extensive searching outside their own website is that the label appears to be based in Seattle (or at least Washington) and their most successful act to date is metal troupe Downset, who released an album with the imprint in 2004 but aren’t even listed on their site’s artist roster in 2005.

Now that you know almost everything there is to know about the people who put out Warren G’s album, let’s see what Warren’s coming with this time on his latest CD “In the Mid-Nite Hour.” Almost the entire album is produced by G himself, which is a promising sign. Despite a career filled with as many highs and lows as a Six Flags roller coaster, if there’s one thing that Warren consistantly knows it’s how to make FUNK – G-Funk that is. The lone exceptions on the album are “PYT,” a Marlon Williams and Terrance Martin track and the “Weed Song” by Andrew Gouche; although Warren does share one co-production credit on “Walk These Streets” with Raphael Saadiq. The latter also provides vocals on the song, which is on the whole a relatively inoffensive and bouncy hip-hop song where Warren raps about “the life” as it were:

“I make music for block pushers and go-getters
From gators, to house slippers, and Mo’ sippers
The old, and new school, the hard hitters
And fuck whoever that don’t roll with us
This here is international player
Fuck the Senator’s daughter and have lunch with the Mayor
I’m in a league all by myself
Everything I done I did for me – by myself
Walked away from bullshit and called the inner circle
Had to get my head right (fuck Universal)”

Now there’s a clue as to why Warren might have taken so long to release this album. While he was probably not contractually bound if he released an album as part of a group like 213, Universal probably had a multi-album deal which he either had to break or be released from if they weren’t going to release or promote his new music. Warren’s definitely got some music worth promoting on “In the Mid-Nite Hour.” Even when he’s not heavily featured in a song lyrically, the smooth funk beats still make the tracks work. Songs like the laid back crooning of “On My Mind,” the crunked out “In Case Some Shit Go Down” featuring Mike Jones and Frank Lee White and the pounding bass and tinkling notes of “Yes Sir” featuring Snoop Dogg with the aforementioned Frank and Bishop Lamont prove that Warren is not obsessed with his own stardom. Warren is not afraid to put over other people at his own expense, and true to his nature he chooses artists who would not put some whack-ass shit on his beats. From the big names like Nate Dogg on the title track and B-Real on latin smooth “Get U Down” to the lesser knowns like Chuck Taylor on the jazzy piano jam “Turn it Up Loud,” nobody embarasses him by doing whack shit. And when he gets the opportunity to solo on songs like “Wheels Keep Spinning,” he does not embarass himself either:

“In this day and age, you gotta ride luxury
With a gang of beats in the trunk, pumpin Warren G
That’s what I do, and get a lot of attention
When I stop, my wheels keep spinnin
I’m an O.G. so I do Sprewells
Got money to spend, y’all niggaz can’t tell?
Got a six car garage with a six-fo’
Six-trey, sixty-eight, AND a fifty-seven
(Man, you know what you got?) Yeah I know I been blessed
With the rep of havin the best rides on the set
And when it comes to mine I’m only dealin with Vettes
They keep a nigga fresh, now your chick’s out of breath
But blame me none, I’m livin life havin fun
and to the block near you, to show ’em how it’s done”

Warren’s raps have always been borderline to simplistic, but even without an uncomplicated lyrical scheme he keeps it interesting with a smooth flow and by not trying to portray himself as absurdly hard or the baddest man alive. His topic matter tends to be a little cliche, but if you’re going to rap about fine women and fly cars, you could do worse than backing it up with Warren’s smooth beats. “In the Mid-Nite Hour” is not a revolutionary release, and sadly his label and distributor may lack the promotional power to push it, but the album does show that he was worth the wait and that he didn’t fall off hard during his long hiatus. Often misjudged and overlooked, this West coast pioneer deserves a little more respect than he gets. “In the Mid-Nite Hour” may not raise him to prominence, but it won’t dissapoint his audience or the casual purchaser who wants some nice shit to cruise to. Judging by their prior track record this may be the one thing Lightyear Entertainment had a hand in that’s not some straight bullshit, and if Hawino is smart they’ll pimp this hard.