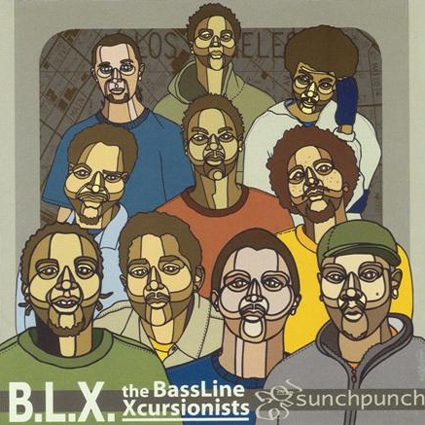 We may be only three months into 2002 but I’m going to say this now, “SunchPunch” is one of my favorite albums to the year. Hip-hop is worldwide, hip-hop is all about diversity, come up with any catch-phrase. But what hip-hop fans still want is music with spirit, music that is from the soul. Gershwin B.L.X.’s debut album is just that.

Five MC’s, two DJ’s, one beat junkie: these are the human elements that form this Los Angeles crew (B.L.X. stands for “Bassline Xcursionists”). They’ve managed to make a name for themselves by opening for countless other groups. They released an album on their own and gained a following. “SunchPunch” is their second full-length album (their first on an actual label) and these guys are going to prove why Los Angeles is fertile territory for some of the best in quality music.

I knew this was going to be the dope shit within the first five seconds of pressing play. You hear a man, in a mocking voice, say “you guys are so harshing my mellow” and it’s followed by… laughter. One element that will always make this writer pay attention to a group is a sense of humor, one can imagine these guys in a studio full of smoke and mysterious liquids, holding loose leaf sheets of paper and going crazy. They test the territory in “Soundcheck”, which is exactly that, testing the mic to see if one is paying attention. The group are about representing “the elements” with their “signature style”, one that is in full speed.

The group alter the lineup in each song, so some songs might have two members, others might have all five. No matter which combination you come up with, it still sounds very much like a group effort, or to put it bluntly, like family. The flows and lyrics are so tight, it almost sounds like they all share the same brain. The sly vibe of “Words” has each MC not just taking the mic for themselves, but bouncing off of each other in a manner that could bring positive comparisons to The Pharcyde and Freestyle Fellowship. The information that comes from these guys is almost too much to consume in one listen, yet producer ABCDEFG does this by combining finely-sliced beats beats over a classic jazz groove.

The execution each MC has is dirty and gritty, you can tell these brothers are hungry. Production is shared by a number of people (ABCDEFG, DJ Obi, Nocturnal Ron, Energetic), but they each compliment the uncontrolled power of the vocals and lyrics. Lyrically, everything is laid on the line, loads of clever metaphors but no second guessing what they’re talking about. Musically, one might be reminded of Cypress Hill’s first album, Company Flow, or Gang Starr. The beats are hard, crispy, vinyl-friendly, and I can’t imagine anyone not wanting to nod or blast this in their mobile units. Not only are they beat-conscious, they are “Bass Line Xcursionists” and their grooves run deep.

The vibe of Gershwin B.L.X. is one of unity, not only with each other, but with the rest of the world. In other words, if they see someone in the crowd nodding their heads furiously, don’t be surprised if for 30 seconds, you become part of their family. Gershwin B.L.X. should be hip-hop’s eight deadly sins, because no matter what the rules are, people are going to overindulge in their dastardly deeds.