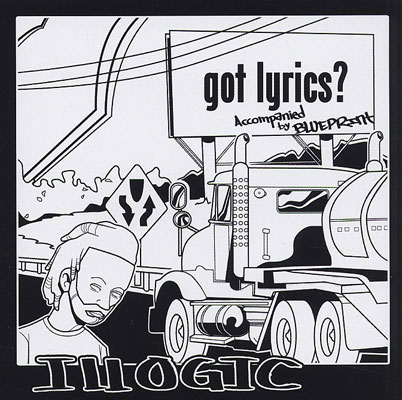 In the hook for “Stop Lyin’,” Ill quips that “every skill ain’t a talent.” Oh really.

I don’t really know what the emcee was thinking when he penned that, but it got me thinking about the difference between the two. The way I see it, a talent is something that comes naturally, an innate ability to perform an action. A skill is something useful, something beneficial. I started thinking about that line flipped around; every talent ain’t a skill. In third grade, there was that one kid who could make the grossest, most realistic farting noises with his armpits. The kid had talent, but, in the long run, it’d be a stretch to call him skilled.

Illogic is what I’d label a talented rapper.

I’m not tryna diss him. In a sea of mediocre, identical underground albums that ramble on about “keeping it real,” “hip-hop” and “spreading knowledge” etc, Illogic pushes limits of thought and barely grazes these concepts. He doesn’t whine about how Puffy’s getting rich, he doesn’t brag about how long he’s been rapping, he just spits nuclear poetry over ill beats by Blueprint. But that doesn’t change how I feel about “Got Lyrics?” which is that I enjoyed listening to it for a few days straight so I could review the jawn, but I probably won’t really check for it again.

Illogic gets too scientific; there’s almost no content to grasp. Only “The Name Game” and “Break Bread” approach concepts, while the other 9 tracks stay on some bland next shit. Occasionally lines jump out at the listener, and they stop and think how “growing up is optional/getting old is mandatory.” But instead of expanding on this interesting line, Illogic jumps to the next one about splitting reality with his words and blah blah blah. I guess it’s dope, but…why? Without a cat as skilled as Blueprint behind the boards, “Got Lyrics?” would be tedious at best. Print nostalgically weaves soul and funk samples into down-tempo tracks that would probably be just as entertaining without the bars on top. The tight backbeat of “Day By Day” with the vocal sample singing the title in the hook definately got my head nodding, as did the simple horns on “Figment Of My Concentration.”

For all that are feeling “Got Lyrics?” consider that rapping like this is a recent concept. The differences between “good” abstract science rap and the science that sucks is still vague. I never really felt anyone in the Anticon camp, but I spent my summer listening to Cannibal Ox and Aesop Rock.