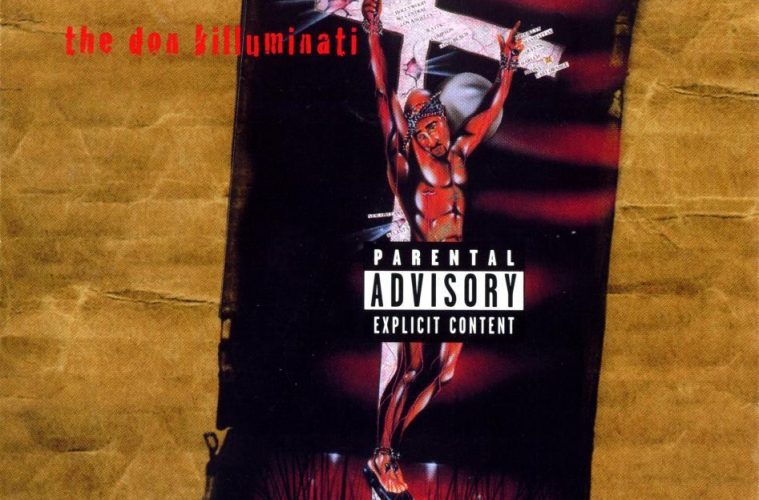 Tupac Shakur’s “Makaveli” CD was the first in a long series of posthumous recordings (bootleg and otherwise) released after his death in September of 1996. Coming only eight weeks after the rapper was shot and in the same year as his massive “All Eyez On Me” double album, the new album and alias caught industry insiders by surprise. Even those who expected a disc of his unreleased songs or a “Greatest Hits” retrospective would have waited until ’97 when a “respectable” amount of time had gone by since he passed. The always unconventional Death Row Records shared no such sentiments.

What followed was a firestorm of controversies related to the album; the best known of these being the theories that Tupac Shakur never really died. While the truth is that Shakur was a prodigiously prolific writer with a penchant for marathon recording sessions in the studio, people seemed hard- pressed to accept that he had a whole album worth of material ready to go before he died. To them, he obviously faked his own death to avoid his enemies as well as more jail-time, and his very alias “Makaveli” was proof. Renaissance writer Niccolo Machiavelli wrote a now infamous treatise called “The Prince” which advocated deception to fool your enemies and advance political causes. Shakur himself may have chosen the alter-ego from being inspired by reading this treatise, but contrary to popular belief Machiavelli did not fake his OWN death – he died quietly and in poor health in June of 1527; almost 450 years before Shakur was even born.

Another notable side of this posthumous album was the sheer amount of venom poured out through Shakur’s lyrics. The infamous diss record “Hit Em Up” released while he was alive was the iceberg’s tip of verbal assaults found throughout this record. The introduction of the album ALONE name checks Nas, Mobb Deep, Biggie and Jay-Z as enemies. Both “Toss it Up” and “To Live and Die in L.A.” call out ex-Death Row producer Dr. Dre as a fake thug and/or a homosexual. “Against All Odds” takes shots at ALL of them and for good measure substitutes Puffy for Biggie. When Nas rapped “can’t believe I heard my name the realest shit you ever wrote,” on the song “We Will Survive” it was THAT 2Pac song he referred to.

Why was Shakur calling out so many rappers? Was it to stir up controversy and generate sales? Did he have legitimate beefs with every single one? We may never know for sure, but other bootleg “Makaveli” albums seem to indicate he felt “Hit Em Up” was a big enough underground hit to build on the formula and repeat it, real gripes or not. Whether you agree with his premise or not, it makes the lyrical content of “Don Killuminati” anything but boring. In fact for a posthumous album, it’s sadly ironic that the quality of Shakur’s writing seemed to have been elevated to a higher level. The social commentary of songs like “White Man’z World” and “Blasphemy” is often overlooked due to this album’s trash-talking, but they rank as some of his most intense work. A quote from the latter may help illustrate:

“We probably in Hell already, our dumb asses not knowin
Everybody kissin ass to go to heaven ain’t goin
Put my soul on it, I’m fightin devil niggaz daily
Plus the media be crucifying brothers severly
Tell me I ain’t God’s son, nigga mom a virgin
We got addicted had to leave the burbs, back in the ghetto
doin wild shit, lookin at the sun don’t pay
Criminal mind all the time, wait for Judgment Day
They say Moses split the Red Sea
I split the blunt and rolled the fat one, I’m deadly — Babylon beware
Comin from the Pharoahe’s kids, retaliation
Makin legends off the shit we did, still bullshittin
Niggaz in Jerusalem, waitin for signs
God promised, she’s just takin her time..”

“Don Killuminati” strikes a nice balance between a hardcore Shakur at his most thugged out with songs that betray his intelligence and also give tastes of why “All Eyez On Me” crossed over so successfully. For each song like “Toss it Up” featuring K-Ci and JoJo that sounds pop, hardcore anthems like “Me and My Girlfriend” bring things into balance. Although the sound of his lady firing off an automated weapon and grunting like Master P is quasi-comical, it makes sense when you consider that this clever song is a double-entendre comparing his weapons of choice to a female lover. As an ode to weaponry it rivals “I Gave You Power” by Nas and as an ode to thug girls it’s the West coast sequel to Notorious B.I.G.’s infamous “Me and My Bitch”:

“I love finger fuckin you, all of a sudden I’m hearin thunder
When you bust a nut, niggaz be duckin or takin numbers
Love to watch you at a block party, beggin for drama
While unleashin on the old timers, that’s on my mama
I would trade my life for yours, behind closed doors
the only girl that I adore, everything I’m askin for
Talkin to me beggin me to just, take you around
Seventeen like Brandy you just Wanna Be Down..”

Not every song on “Don Killuminati” is a sure-fire hit, but on such a shortened and intensified dose of Shakur’s work the results are much more even than the overly long “All Eyez On Me.” As a result songs like the dark and moody “Hail Mary” or the bouncy “Just Like Daddy,” both featuring the Outlawz, are duets at least equal to any ‘Pac/Lawz duets released on posthumous Shakur albums since. None of the songs on “Don” sound rushed, despite the irony of it’s quick release after his departure from our planet. This album’s success and the further releases that it spawned solidified Tupac’s reputation as one of the all-time greats, but what this CD illustrates best and most sadly is what kind of work Shakur COULD have continued to do were it not for his untimely death. 1996 robbed us of his physical presence, but his spirit lived on through the music and still haunts us to this very day.