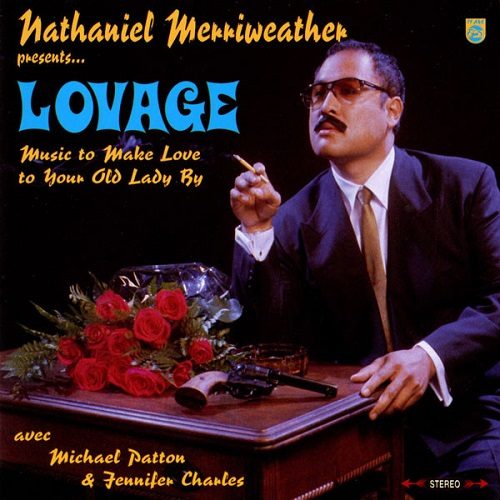 Dan the Automator :: Music to Make Love to Your Old Lady By

Regardless of musical accomplishment or preference, one thing you can never take away from Dan the Automator is his sense of humour. You can find him on the cover of this album in a double-breasted suit, dark glasses and faux moustache. On the table near him is a revolver and a bunch of red roses; in his a hand a cheroot. Not only that, but consider the pseudonym he adopted – Nathaniel Merriweather. Dan always gets love from me for his sense of humour and satire; I don’t appreciate MC’s or DJ’s who take themselves too seriously. Quite apart from that, he’s a certified genius for his work as part of the Handsome Boy Modeling School and Deltron 3030. His album “A (Much) Better Tomorrow” was a solid effort and he has provided some of the best beats ever for Kool Keith. I thought he fell off with Gorillaz but from any angle Dan has an impressive pedigree, both in beat-construction and humour.

I’d better make something clear; this isn’t a hip-hop album. The beats are subdued and slow, what might loosely be termed trip-hop. The singing is all absurd and over the top. Every line is filled with bizarre innuendo and throaty phrases dripping with mock lust. I don’t know who the vocalists are but the woman sounds effortlessly breathless, like she’s permanently peeling off her clothes. The bloke is extremely and deliberately cheesy and proclaims “I’m a man” at regular occasions. There is no rapping; just music is built on soft drums, pianos and things like violin samples. The only hip-hop is a little bit of scratching. The song names speak for themselves – “Sex (I’m A)” and “Archie & Veronica” are among the best.

Obviously all the beats are by The Automator. Maseo, Damon Albarn (from Gorillaz) and fellow DJ genius Prince Paul (or should that be Chest Rockwell) all put in cameo appearances in the skits. For a refreshing change these are actually amusing (think “3 Feet High”) and not stupid or boring. There is a pretty similar vibe throughout the album; one that is relaxed and even melancholy at times. As for the activity alluded to in the title, well, it all seems a little slow and passionless for that. This album is good for somethings-perhaps if you’re a bit worse for wear and desire music a little more relaxing than M.O.P. It’s good music to work to if you’ve something to sort out. There aren’t many songs that get beyond the background type of track. None will make you sit up to listen to the lyrics. None of the beats are massively inventive.

Describing individual tracks would be fairly pointless since the album is a themed one. One track on it’s own in say a compilation would seem very strange. Dan loves sending himself up and this album wouldn’t work at all without that obvious humour. The problem is that humour becomes a substitute for hip-hop; so something must be up. I respect Dan greatly but I just don’t think this album stands up to close scrutiny. He gets 10 out of 10 for laughs but that isn’t enough to carry a record. Don’t get me wrong, the music is not bad; it ranges from the mediocre to the good. This album is a concept one, and therein lies it’s downfall. Whereas the amusing lounge-act concept of “Handsome Boy” came off well with it’s good beats, the concept of this album limits it’s scope to something hip-hop heads will not appreciate. The music does have some nice moments but from a rap perspective it’s not engaging. The Automator is a very talented guy, but Dan should stick to the rap music he does so well.

Dan the Automator :: Music to Make Love to Your Old Lady By
5.5Overall Score
Music6
Lyrics5